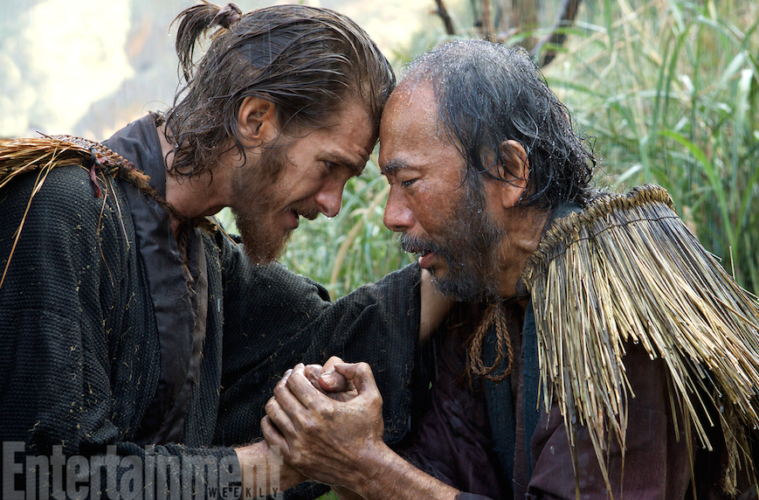 Free from the shackles of Spider-Man, Andrew Garfield recently wrapped an extensive shoot for one of our most-anticipated films of the year, Martin Scorsese‘s long-gestating priest drama Silence. While Paramount haven’t officially released any stills from the project, thanks to a recent wrap party and a press conference as the cast and crew depart Taiwan, we have our first look and more information.

During the recent event, the first images were presented — and while they aren’t in high-resolution, they do provide the first glimpse at Garfield, who takes the role of Father Rodrigues, a 17th-century Portuguese Jesuit who travels to Japan with a fellow priest amid rumors that Rodrigues’ mentor has abandoned the Church. During the press conference, Scorsese revealed he first received Shûsaku Endô‘s novel in 1988 and a first pass at the script in 1991 wasn’t successful. He says the film had to “develop or evolve” in himself before he could try to realize it in a dramatic form, for he felt he wasn’t ready at that time.

Garfield says the adaptation deals “with such deep and difficult material, timeless, and huge in scope, huge in emotion. It’s a lifetime that the character of father Rodrigues goes through that we witness. It’s such an agonizing lifetime that he has to live through and yet he wrestles with the greatest and most important and difficult questions that we all wrestle with, which is how to live and how does one live a life of meaning, a life of faith, and does that require you to live in doubt as well? That’s just scratching the surface of why I felt drawn to this story and this character.”

Check out the images below, along with a playlist of videos from the press conference, amounting to over an hour. Update: Another new image has been unveiled, thanks to EW, which also features Shinya Tsukamoto as a villager named Mokichi.

Update: Additional images removed at the request of producers.