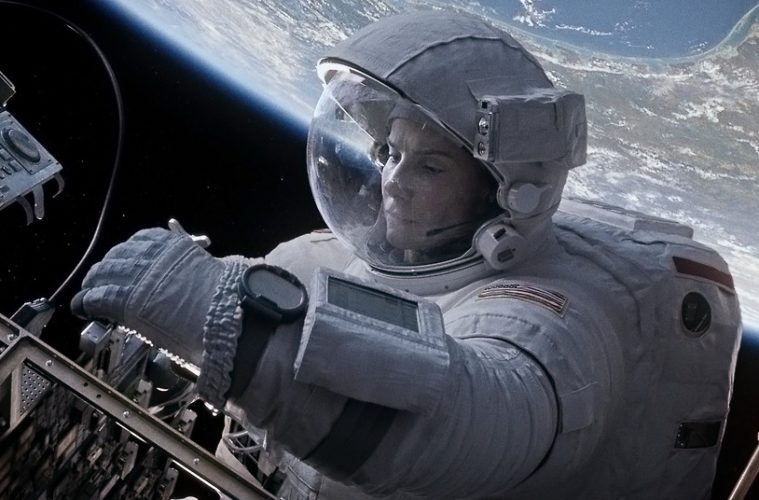 After years of waiting, Alfonso Cuarón‘s follow-up to his astonishing Children of Men has finally screened for the public for the first time. Early this morning at Venice Film Festival his space thriller Gravity was shown to press and while our review will come during Toronto International Film Festival, we’ve rounded up the first batch of impressions. For the most part, they sell an intense, extraordinary visual triumph, all with a story then never loses its humanity. For those fearing spoilers, we’ve excised them and the snippets (and tweets) can be seen below, with more being added as they come in.

Update: The film’s Telluride screening just got out and we’ve added some impressions below as well.

At once the most realistic and beautifully choreographed film ever set in space, Gravity is a thrillingly realized survival story spiked with interludes of breath-catching tension and startling surprise. Not at all a science fiction film in the conventional sense, Alfonso Cuaron’s first feature in seven years has no aliens, space ship battles or dystopian societies, just the intimate spectacle of a man and a woman trying to cope in the most hostile possible environment across a very tight 90 minutes. World premiered at the Venice Film Festival, with Telluride showings following quickly on its heels, this Warner Bros. release is smart but not arty, dramatically straightforward but so dazzlingly told as to make it a benchmark in its field. Graced by exemplary 3D work and bound to look great in IMAX, the film seems set to soar commercially around the world.

Opening Oct. 4 Stateside following its Venice and Toronto premieres, the Warner Bros. release offers in abundance the sort of eye-popping, screen-filling spectacle that demands to be viewed in a theater. Not unlike earlier triumphs of 3D and vfx innovation such as “Avatar” and “Life of Pi,” though conceived along less fantastical, more grimly realistic lines, “Gravity” is at once classical and cutting-edge in its showmanship, placing the most advanced digital filmmaking techniques in service of material that could hardly feel more accessible.

A genuinely tense and exciting lost-in-space thriller, Alfonso Cuaron’s exhilarating and often spectacular 3-D film is a real pleasure, driven by top-notch lead performance from Sandra Bullock and George Clooney as well as some seriously cool special effects. Despite some lapses into sentimentality, Gravity sustains its simple concept and turns out to be a real audience pleaser as well as a shrewd choice for opening night film for the Venice Film Festival, where it has its premiere.

Oliver Lyttelton at The Playlist:

[I]t’s visceral, knuckle-chewingly tense stuff, Cuaron and his co-writer and son Jonas expertly packing obstacle packed on top of obstacle in the way of the astronauts’ return home, without losing touch of humanity or humor. The camera floats as weightlessly as its subjects, but the shots (often extended, but always in a way that favors storytelling above showboating) are always clear, and more often than not composed with meaning and artistry – courtesy again of the great Emmanuel Lubezki. And with the director being careful to ensure the void of space doesn’t carry any noise, the excellent score by Steven Price (“Attack The Block,” “The World’s End”) helps to keep things both breathless and beautiful.

On a superficial level, this is your regular, down-home disaster movie in which we join a trio of plucky, bantering astronauts during a routine space walk which goes very south very quickly. Their trio swiftly becomes a twosome and the remainder of the film comprises a catalogue of micro-second clutches and grabs for a lifeline of any sort. Yet – and some may find this side of the film a mite on-the-nose – Gravity operates as a bold (possibly even eccentric) and majestically rendered parable on the wonders of creation, with a very specific focus on the details of reproduction. Imagery of umbilical chords, foetal positions, wombs and characters triumphantly surfacing from the amniotic river sit surprisingly comfortably against a visual backdrop of decaying space stations and an infinite shroud of nothingness.

This is a film that has to be seen on the big screen (and, one would presume, IMAX where possible). Only the canvas of cinema can provide the grandeur, scale and – when it comes to the sound design – the volume to tell such an epic tale. The plot is one of a shipwreck, and the film shares something of the concerns of All Is Lost, the Robert Redford sea yarn from Cannes earlier in the year. As well as occupying itself primarily with the nuts and bolts of survival, Gravity explores deeper concerns about the very value of the life we’re trying to prolong.

Guy Lodge at In Contention:

[I]t’s 45 years since Kubrick’s “2001: A Space Odyssey” effectively patented the description “the ultimate trip,” but that doesn’t mean Cuarón and his team can’t further serve and substantiate it. Certainly, the unfeasibly mobile camera of Cuarón’s loyal, invaluable cinematographer Emmanuel Lubezki seems drugged – no, purely entranced – by its possibilities, gliding and weaving across seemingly impracticable distances with a deliberate fluidity that no previous screen depiction of weightlessness (whether in outer space or the subconscious hotel suites of Christopher Nolan’s mind) has come close to approximating. (You’d have to go back to Wim Wenders’ “Pina” to find a film that demands this compellingly to be made and seen in 3D, and even that’s in a different ballpark.) When I stood up as the final credit rolled, I don’t mind admitting that I immediately had to sit down again, a Bambi-esque wobble coursing through my limbs; for sheer transference of experience upon the audience, I can think of no film quite like it.

Geoffrey Macnab at The Independent:

The one problem with Gravity is that the plotting never quite matches its visual imagination. There isn’t the same urgency or plausibility here found in JC Chandor’s recent, similarly themed All Is Lost (which featured Robert Redford as a lone sailor whose boat is sinking.) At times, as the astronauts desperately battle fire, tangled parachute strings and malfunctioning machinery, matters risk becoming just a little banal and predictable. Even so, this is a film that, at its best, really does induce a sense of wonder.

Now that the embargo is up, I can say that what Jaws did for water, Gravity does for air.

What surprised me was how much of an action flick Gravity is. Non-stop, no-nonsense. It's Speed in space. Hugely entertaining.

GRAVITY (A) Mainlined sensation. A staggering dance, then a balletic fall, into great silence. Maybe I'd change a thing? We'll talk later.

GRAVITY is sensational heart-pounding cinema at its best, and the work of a true auteur that goes by the name of Alfonso Cuaron. #Venezia70

#Venezia70 #Gravity is the gamechanger we were waiting for! Masterful directing by Cuaron and astonishing performance by Sandra Bullock!

GRAVITY: A heart-throbbing survival story where a man isn't vs sea; but a woman is vs. space. Constant tension/not a moment to breathe. WOW!

Gravity will be a movie you will want to see again and again. Whether it wins best picture or not I don't care. It's amazing. #Telluride

GRAVITY is easily the best 3d flick I've ever seen. It's also not quite as stupid as AVATAR.