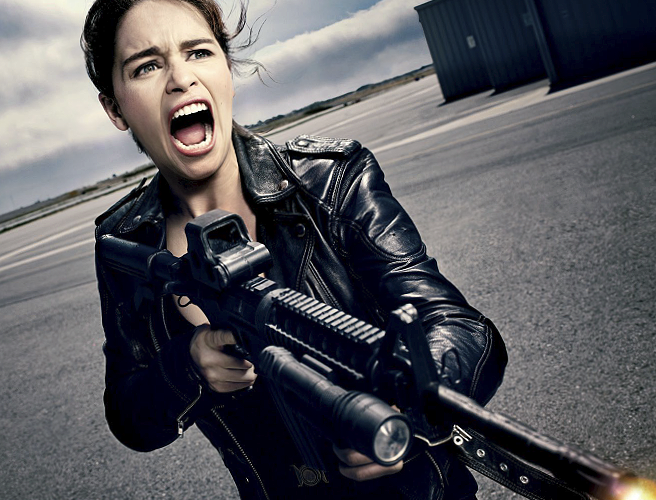 In a rush to jump into Hollywood’s blockbuster cinematic universe arms race, Paramount have not only set a new Terminator film for next summer, but two follow-ups for 2017 and 2018. What has yet to be determined, however, is if any of them will be worth watching. Stumbling out of the gate, we now have the first batch of stills from the feature, which inspire very little confidence. Coming from EW, they feature the cast in various stages of screaming fits as they recklessly aim their guns in barren airport lots.

Arnold Schwarzenegger is seemingly the only one relatively unscathed in the process, coming back for the Alan Taylor-directed feature. The story is now set in 2029 as we follow a group of rebels during the Future War fighting against Skynet. Jason Clarke takes the role of John Connor, leading the fight alongside Jai Courtney‘s Kyle Reese. Emilia Clarke plays Sarah Connor, who Reese goes back to 1984 to save. What follows one can read below, along with a batch of photos, but suffice to say, one might be better off popping in James Cameron‘s first two features next summer rather than heading out to the theater.

Twist No. 1? Sarah Connor isn’t the innocent she was when Linda Hamilton first sported feathered hair and acid-washed jeans in the role. Nor is she Hamilton’s steely zero body-fat warrior in 1991’s T2. Rather, the mother of humanity’s messiah was orphaned by a Terminator at age 9. Since then, she’s been raised by (brace yourself) Schwarzenegger’s Terminator—an older T-800 she calls “Pops”—who is programmed to guard rather than to kill. As a result, Sarah is a highly trained antisocial recluse who’s great with a sniper rifle but not so skilled at the nuances of human emotion.