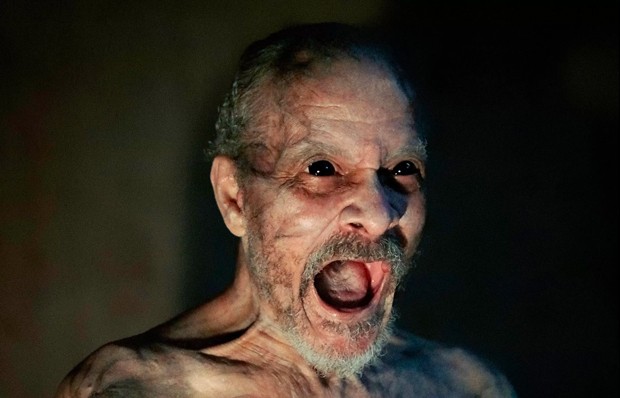 After releasing Krisha, one of the best directorial debuts of last year, A24 also backed writer-director Trey Edward Shults‘ follow-up It Comes at Night, and it recently had its surprise premiere at Overlook Film Festival this past weekend, where it was received with high praise. Starring Joel Edgerton, Riley Keough, Christopher Abbott, and Carmen Ejogo, the psychological horror follows a father who believes an evil presence is outside his home and a battle must be waged.

Check out the new trailer and poster below, along with reactions from its premiere.

IT COMES AT NIGHT is not the film I was expecting. It’s something wholly unsettling – spider’s nest of unease, dread & ever present danger.

A24 has another masterpiece on their hands, folks. IT COMES AT NIGHT is terrifying in wholly unexpected ways. #overlookfilmfest

I reviewed the terrific, uncompromising IT COMES AT NIGHT: https://t.co/oVlKTFNX2R

IT COMES AT NIGHT is terrific. a somber portrayal of how sickness turns good people into monsters. trey edward shults is a visionary

IT COMES AT NIGHT will fuck you up if you have kids. Or parents. Or a spouse. Or anyone you care about, really. #overlookfilmfest

My review of IT COMES AT NIGHT, which is terrifying and very, very good. Imagine KRISHA with a sci-fi twist: https://t.co/7KYrN89oBb

My IT COMES AT NIGHT review is up. This movie is extraordinary. https://t.co/5BiUzLAddN

Award-winning filmmaker Trey Edward Shults follows his incredible debut feature Krisha with It Comes At Night, a horror film following a man (Joel Edgerton) as he is learns that the evil stalking his family home may be only a prelude to horrors that come from within.

Secure within a desolate home as an unnatural threat terrorizes the world, the tenuous domestic order he has established with his wife and son is put to the ultimate test with the arrival of a desperate young family seeking refuge.

Despite the best intentions of both families, paranoia and mistrust boil over as the horrors outside creep ever-closer, awakening something hidden and monstrous within him as he learns that the protection of his family comes at the cost of his soul.