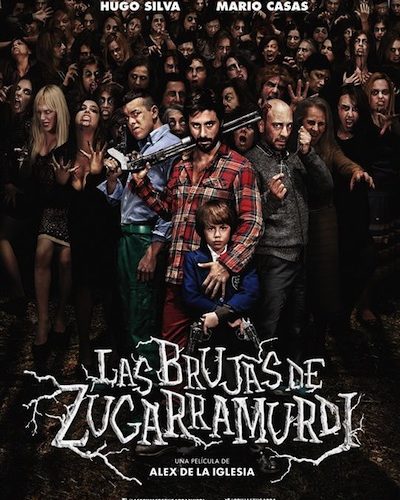 The pacing is relentlessly silly at times, but all I could think while watching Witching and Bitching was how wild the experience was. Witness the opening sequence, where robbers are dressed as street statues. One is an Army Man named Tony (Mario Casas), complete with a green machine gun. Another, Jose (Hugo Silva), is dressed as a metallic Jesus with a cross in tow (inside, a shotgun). The way the opening heist, as laughs abound, is almost completely bungled sets up exactly how competent the two crooks are. The film hits its first pacing issue during the cab ride they take as their getaway. Alongside the two robbers is a man that was on his way to a job interview, the cabbie (Jaime Ordonez), and Jose’s son (Gabriel Delgado). Here is where most of the background and personality of our characters are revealed as the “bitching” commences. Featuring our sexist, all-male group, they recount their negative tales of the female gender and there comes a point where it’s comically sad how much of a rant it turns into.

While we get motivations for the heist and more, all of it is fairly light and occasionally interesting, but quickly turns dull. They soon arrive in a small town that they have to cross to get to their desired location and the film starts to pick up again. It’s here that the “witching” part of the title comes into play. It’s difficult to remember the last time witches were portrayed on the big screen with this much fun. Here they are cannibals and, true to their name, only female — no sorcerers allowed. Furthering this motif is one witch in particular, Eva, portrayed by the alluring and punk-rock Carolina Bang, complete with motorcycle jacket halter top and shaved head long-haired mohawk. She gets both Jose and Tony’s attention and keeps them competing against each other. It’s quite hilarious as the director plays into both the converging desires of a heterosexual viewer and the characters. She’s given all the screen presence and outfits to compliment her figure, something Iglesia was clearly familiar with, considering she also took part in his 2010 film The Last Circus, along with a few prior projects.

Iglesia’s latest film, complete with all its flaws — notably the overuse of CGI and the notion that his complete indulgence in the material can sway into overkill — still provides a disjointedly entertaining film. Silly, ridiculous, and full of interesting mythology and visuals, Witching and Bitching is a wild ride to experience.