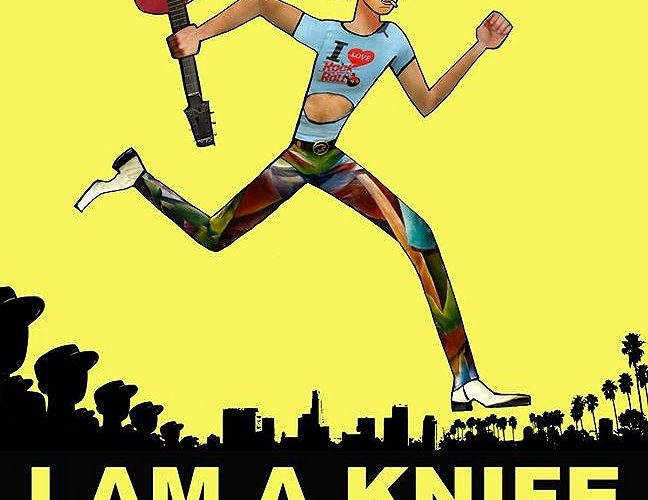 [Fantastic Fest Review] I Am a Knife With Legs

Regardless of the subgenre it occupies, a general rule of comedy should be that it at least makes an audience laugh. Therefore, it is mission accomplished for I Am A Knife WIth Legs, the deliriously funny and whimsical film from first-time director Bennett Jones who also does producing, editing, the score, writing, musical accompaniment and much more. Running a brief 83 minutes, this is a nearly perfectly paced comedy that works on so many levels. Bennett isn’t afraid of lo-fi effects, as the opening minutes clearly show, but he also makes it endearing enough by playing with continuity issues and even getting into some emotional moments as well. This is the kind of low-budget comedy that makes one wonder why some of the studio features that hit cinemas aren’t nearly as funny.

Fans of Flight of the Conchords should take note as the music is deliriously catchy, Bennett has a perfect monotone deadpan delivery, and the general whimsical nature of the comedy feels like an extension of that series. But to be sure, Bennett has been in production in various states on this for six years so there is no cribbing or anything nefarious about this. The film features four actors and only two of them are in it for any stretch of time, but I Am A Knife With Legs’ Bene (pronounced like beignet) is the main character, an international rock superstar hiding out in LA complete with ridiculous outfit. His t-shirts have a large circular hole cut in the middle of it (Bennett is in good shape) that end up being a humorous touch as you watch him go from outfit to outfit that all have the same feel. Rough drawings are used with Bennett doing voice0over to narrate throughout. Through this we learn that Bene has a fatwa put out against him by a mysterious user using Fatwalist.com, a fictional website where people can put a religious hit on someone. So Bene is preparing for numerous assassins with his trusty friend Beefy (Will Crest) helping. We also learn about some of his background and why he has a sadness to him — it’s a nice sidetrack and as Bennett described, the film really revolves around having a central story, but being unafraid to go off on tangents for the sake of comedy.

Bennett is clearly an intelligent and quick-witted comedian and it’s nice to see that he gets out of his own way to let the laughs resonate. While not quite a laugh a minute, this is easily one of the funniest films I’ve had the pleasure of watching this year. Richly told in lo-fi glory, I Am A Knife With Legs is a film that won’t land with everyone, but should have a wide enough audience if you’re game for something a bit more charming than it is polished.

I Am a Knife With Legs screened at Fantastic Fest and is seeking U.S. distribution. See the trailer above.