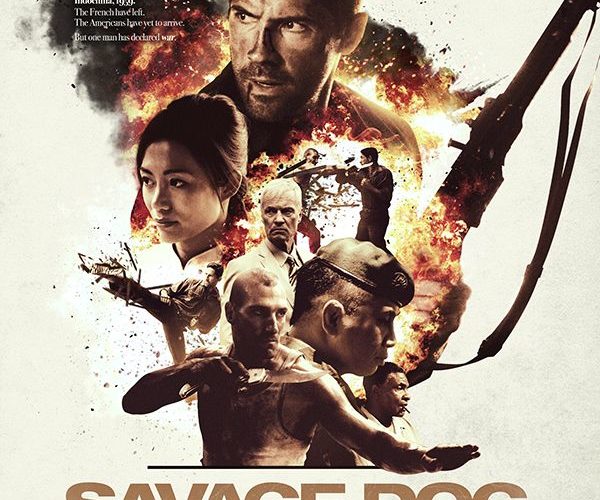 When a film opens with Scott Adkins rising from the mud with a scream in Indochina circa 1959, you begin cultivating expectations. You forgive the ham-fisted voiceover narration and the quick slow motion cuts disorienting place and time. You forgive the lack of context as to why this man (and a woman too) was trapped under mud in the first place because you’re re-situating yourself in your seat to brace for the impact of the actor’s fists against the flesh of whomever put him there. Maybe the woman is a love interest. Maybe she won’t survive. I’d be lying if I didn’t say I hoped she wouldn’t so the bloodlust could increase further towards revenge. Sadly, vengeance — why I sat down at all — is still an hour away.

Ex-stuntman Jesse V. Johnson’s Savage Dog rewinds six months to show us how Martin (Adkins) got trapped there after all, the aforementioned prologue glimpse into the future serving as nothing more than an excuse for me to talk about it without people screaming, “Spoiler!” Even on that personal level it’s still not enough to warrant its inclusion, though. I can now watch without worrying about his fate before catching back up to the present, but that sense of security is just as bad as it is comforting since it also renders stakes obsolete. This slog of exposition is therefore made more boring as a result, its introductions of characters a prolonged formality considering who they are is meaningless outside of how ruthless they may prove as adversaries later. What we need to know: Martin’s a badass. He’s an Irish boxer who joined the war on the coattails of his father and brother, their fates key to why he’s currently serving the third year of a six-month sentence. Martin carries himself well as a workhorse in the ring for Nazi exile Steiner (Vladimir Kulich). He fights to survive, each victory lining the pockets of Steiner and his cronies (a who’s who of ex-pats including Cung Le’s North Vietnamese soldier Boon, Charles Fathy’s Spanish opportunist Amarillo, and Marko Zaror’s formidable Frenchmen Rastignac, aka “The Executioner”). The South Pacific is crawling with unsavory figures like them using its limbo status via failed colonization as safe haven. With rumors of an American arrival, the moment for filling coffers is now.

Do we care about anyone but Martin? No. I’m not really sure we care about him either, though. He’s merely the man at the center, the one Johnson props up to be the object to root for. How can we not if the pretty and empathetic Isabelle (Juju Chan) does? She sees some good in him and we just have to trust her despite the company he keeps (albeit as their prisoner) and the discovery that MI-6 Agent Harrison (Matthew Marsden) seeks to extradite him back to England. But should we? How do we know she isn’t working for Steiner herself? It’s pretty convenient that hers is the only place he can go when Steiner releases him alongside a threat of owing a favor in return. Convenient indeed. I’ll let you find out whether that contrivance is Steiner having more reach than we believe or the result of Johnson not caring about suspense as much as crafting reasons for his third act’s bloodbath. Remember: Martin does have to eventually be left in the mud, his scream in escape a sign of brutality to come. Will vengeance come at the cost of betrayal or villainy? Will love or hate drive him? In the end it doesn’t matter since the first hour is pure set-up for violence — the whole of Savage Dog an origin tale of sorts for the titular beast in hopes of numerous direct-to-DVD sequels brimming with unbridled mayhem. As Keith David’s narration (as father figure Valentine) states, the most dangerous men have nothing to lose.

I just wish the process of Martin losing everything didn’t take so long. I’d forgive its numerous clichés from Valentine providing him the only compassion he’s ever been afforded from another man (women are props here, pretty faces the men are quick to dismiss as naïve and delusional rather than talk to them) to the war within of keeping his aggression in check or letting it loose. These types of tropes add to the D-movie aesthetic being worn as a badge of honor alongside overwrought dialogue and two-dimensional characters. But this inherent shallowness means you can race through it. You can prop Martin up and tear him down in as much time as it takes wasting twenty minutes on a revolving door of nameless foes hardly putting up a fight. Johnson needed to get to the end quicker than he does. It’s there that Savage Dog becomes what we expected: grotesquely violent, overly dramatic to the point of comedy, and full of punishing hand-to-hand combat. If there’s anything included that we want more of it’s Adkins seeing red. That’s what you stretch out, not the uninspired journey beforehand — especially if you’re opening yourself up for sequels wherein he’s already a lost soul looking to destroy everything in his path. Watching Adkins take on Le and Zaror is a ton of fun, but it’s not enough to forget the itch that almost had me get up out of the theater at the halfway point. The one-man wrecking crew Martin becomes simply saves the film from being a total bust.

It doesn’t help that Isabelle plays a larger role in Steiner’s life than Martin’s or that Steiner is set-up as the big bad despite being a pompous figurehead standing in the way of letting Boon and Rastignac put their money where their mouths are. There are so many moving parts building up a convoluted plot that does nothing but frustrate as it shields us from the mindless carnage we want. Embrace the chaos and the cheese. Embrace the decapitations and rivers of blood that delight enough to ignore the visibility of pyrotechnic plates inside the shirts of everyone who gets shot. Only when limbs literally start flying through the air did I truly find myself invested in what was onscreen. It’s too bad it came way too late.