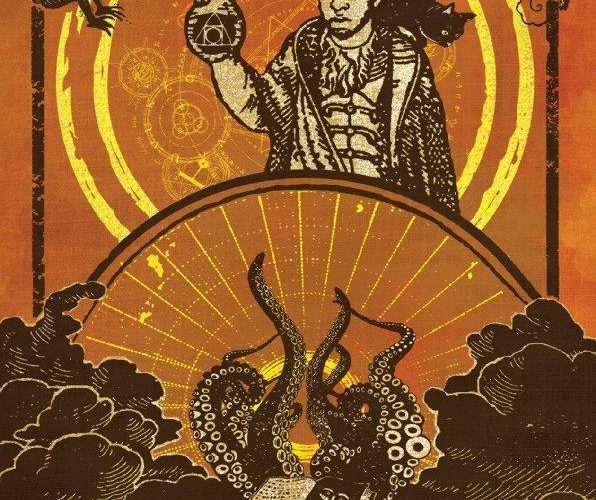 I have no clue why Sean (Ty Hickson) messes with the titular book in Joel Potrykus‘ The Alchemist Cookbook. He doesn’t seem to care about money while living as a hermit inside a hidden trailer deep within the woods—bill collectors “no longer owning him”—so gold is out of the question. It might be for an elixir of immortality, his ritualistic incantations recalling satanic verse in search of dealing with a demonic presence that only pentagrams and dead animals hope to conjure. Why Sean plays with forces that push him beyond the boundaries of chemistry is ultimately beside the point. What his journey reveals is the slippery slope of sanity caused by isolation from humanity. Paranoia, anger, and fear arrive quickly; the only transmutation occurring is his. The film’s title card mimics the cover of William Powell’s The Anarchist Cookbook, a publication brought to fruition as a way of protesting the United States’ involvement in Vietnam. It contained step-by-step instructions for explosive manufacturing, manipulating telecommunication systems, and literally “cooking” up drugs such as LSD. The FBI went on record calling it “one of the crudest, low-brow, paranoiac writing efforts ever attempted” within a memo dated sometime between 1971 and 1999. The beauty of this quote is that it’s pretty much exactly what I thought of Potrykus’ film, a project wearing its micro-budget on its sleeve with oftentimes funnily-read dramatics on behalf of a character so lost inside his own mind as to be certifiably insane. I unfortunately was never able to fully buy into it.

My breaking point occurred twenty minutes in when a newcomer named Cortez (Amari Cheatom) interrupts the supposed one-man show. The camera takes us outside the trailer to Cortez’s car as they procure the groceries he so generously transported into the middle of nowhere. We linger at the start upon a yellow bag of eggs, statically at the frame’s center until Cortez wakes Sean from his trance with a yell. We’re forced to look at this bag: it’s color drawing our eyes in as its transition from car to Sean’s hand serves as the first real motion of the scene. But what happens five minutes later? The characters talk about this bag’s contents, make a half-hearted effort to find it, and agree it never made the trip. Was I crazy? This tiniest of details ripped me from the film and it might have been intentional. Maybe Potrykus makes it so obvious that we know this bag exists so we will second-guess our own notions of reality. It’s a cunning maneuver, especially considering the story deals with a man obviously losing his marbles. What is real? What is imagined? We really never know. Suddenly brilliant visual cues calling to mind The Village, The Witch, and Resolution crop up—these moments trying their hardest to bring me back into the fold. Potrykus introduces a force of evil with a scene of demonic possession that fires on all cylinders, but as quick as it arrives it’s gone. The sun rises and we’re back to depictions of insanity bordering on comedy.

Maybe it’s my utter inability to form a human/pet relationship such as Sean’s with cat Kaspar, but watching him scream for ten frantic minutes in search of the feline is too much for my patience to endure. I wanted to see the devil creature again. I was chomping at the bit wondering how Potrykus would bring it back. Subtly, loudly—I didn’t care. Instead I got more of Sean’s descent into lunacy with newfound physical or imaginary features to boot. After spending so much time watching him crack we finally approach an answer before reverting back to the cracking. It’s a frustrating exercise, one I’m sure Potrykus would love to hear me describe. But while such an enterprise will endear some to its difficulties, I sadly wasn’t sold. There were too many questions spinning about like what Sean and Cortez’s uncle’s involvement in all this was. Is it just me or was the photo of Sean as a boy glimpsed outside on the back of the cookbook before eventually seeing it taped to the trailer’s wall? What’s in the book that has Sean going so wild-eyed? Why is he screaming the names of elements while looking at the periodic table as though it’s a recipe? So much absurdity is introduced without any investigation that I found myself as crazed and perhaps as cheated as Sean by the end. Because for every fantastically hilarious interlude brought on by Cortez’s appearances and creepily horrific imagery in the woods comes twice as many laborious minutes watching Sean tweak alone.

I bet another viewing would reveal missed details, but the threat of being wrong and finding myself enduring the slow, quiet madness again scares me. I want to hear the growl of whatever lies in waiting at the beginning to match it with noises at the end. I want to contrast Sean’s attitude before Cortez’s initial visit with the aftermath of his second. And I want to pay attention to the camera angles to see if we’re watching omnisciently or as a character yet unseen. Maybe knowing the boring stretches exist will force me to look away from Sean at whatever Potrykus may have hidden in plain sight when they do. I only wish it had invested me more to muster the enthusiasm that’s necessary to revisit later.

The Alchemist Cookbook‘s screened at Fantasia International Film Festival and opens on October 7.