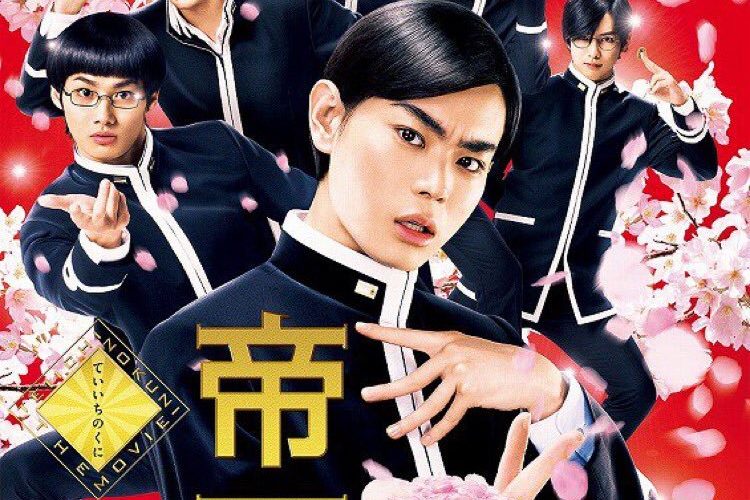 We are defined by moments, decisions made by us or for us by another. For Teiichi Akaba (Masaki Suda) it was always the choice between love of the piano (his mother’s passion) and a desire to please his father (Kôtarô Yoshida’s Josuke Akaba) by following a path towards political power — something he himself failed to achieve. Teiichi chooses the latter because of something his Dad said during a rant about status and control: that ascension to the height of Japan’s Prime Minister is to position oneself as maker of the country. Only at the top can you dictate true change and/or ensure your passions are protected under law. It’s a lofty goal that proves as much about self-sacrifice as it does about self-centeredness. And the journey begins now.

Well, that’s a lie. As Akira Nagai’s Teiichi: Battle of Supreme High — adapted by Yoshihiro Izumi from Usamaru Furuya’s manga — shows, the challenge actually begins much earlier. Politics aren’t something you gravitate towards on a whim when some set course in primary school. It’s about having the best grades and going to the best school. It’s about knowing the game and playing the odds from the moment you set foot in the highly coveted private institution known as Kaitei High School. Because even though the dream is to be school board president, one doesn’t rise to that rank as a freshman. You must bide your time, excel in class, and back the right horse until he has the power to nominate you in the future. So while Teiichi is the titular “hero,” we aren’t watching his race for the presidency. He’s but an active agitator and tastemaker weighing his options between two vastly different ideological candidates in Roland Himuro’s (Shôtarô Mamiya) ambitiously charismatic leader and Okuto Morizono’s (Yûdai Chiba) champion of the people for democratic rule. Himuro is the obvious favorite, but extenuating circumstances might not render him the best choice for allegiance. Teiichi must take into consideration those other freshmen that pose a challenge to him in the years to come (Shûhei Nomura as his rival Kikuma Togo and Ryoma Takeuchi as the popular outlier who considers himself a friend Dan Otaka); outside influence (Teiichi’s and Togo’s fathers have been locked in a bitter feud for decades); and his own conflicting desires.

What results is the cattiest war of attrition this side of Tracy Flick versus Paul Metzler in Election. One could argue this battle is worse because it shows exactly how corrupt things are on both sides of the coin. We witness the backdoor deals happening on every level of the race from candidates offering bribes, managers constructing elaborate shows of force in ways that transcend money, and fathers being willing to use their sons as pawns in their own petty game for dominance. The sheer amount of influencers also guarantees multiple traitors who will jump ship for a competitor out of both greed and contrition. Those who feel guilt must weigh their conscience against their dreams and those who don’t will be betrayed by those who do. But no matter how heated things get, Nagai and Furuya inject an infectious humor above everything else. This is why we can laugh when Teiichi attempts seppuku due to the sheer absurdity of a teenager going to such lengths in defeat. Every action is heightened to the point of cartoon as satire transforms political warfare into farce. We see these characters as high school stereotypes recognizable from our own past and also as actual candidates mired in immaturity and insolence within our governments who do whatever’s necessary regardless of how badly they desecrate their office. Pretend Kikuma and Teiichi are Kellyanne Conway and Huma Abedin jockeying for position while Donald Trump makes promises only his deluded sycophants could ever believe and Hilary Clinton rallies behind universal inclusion.

Where this hilarious rendition differs from the real world, however, is that a kid like Teiichi still has the opportunity to change. Middle-aged politicians have already sold their soul to the point of never backing down from a line they’ve crossed before. Teiichi may yet let the kindness of his girlfriend (Mei Nagano’s Mimiko Shiratori) chip away at his immovable resolve. He may acknowledge that his and Kikuma’s paths run parallel towards destruction and that Dan’s proves how being the better man can win after all. When the end comes we truly aren’t certain how things will shake out because humanity forever ses itself up to embrace the wrong side for far too long. But don’t discount the possibility that some will choose “good” for selfish gains either. Much of the humor is broad and juvenile from performances going over-the-top hammy to schoolyard brawls including nipple twisters. A running gag about Teiichi’s second-in-command Komei (Jun Shison) being in love with him (and vice versa while Mimiko looks on) feels flippant and unnecessarily homophobic, but that’s the only “off” instance I could find. The multiple examples of child suicide attempts are also disturbing, but they make narrative sense in the context of what’s happening and what the characters are willing to do. Things don’t go that dark very often, though. On the contrary, most gags are of exasperated disbelief when carefully manipulated plans backfire or surefire hypotheses don’t bear fruit. We’re dealing with shrewd teens devoted to their personal agendas. A lot goes into every defeat.

And there’s ultimately a heartfelt message about being true to yourself without letting outsiders influence you away from your dreams. Ambition and experiences may change what that dream is to a certain extent, but let it be from growth and evolution rather than external pressure. That’s not counting how our personalities can also shift in the intervening years to alter not what we want, but how we achieve it. This is what stood out the most in Teiichi: Battle of Supreme High‘s ability to surprise even when the results prove exactly how I guessed. Its characters always have ulterior motives and an extra ace up their sleeves no matter how certain they are of victory in the end. Perception is often more important than the actual deed.