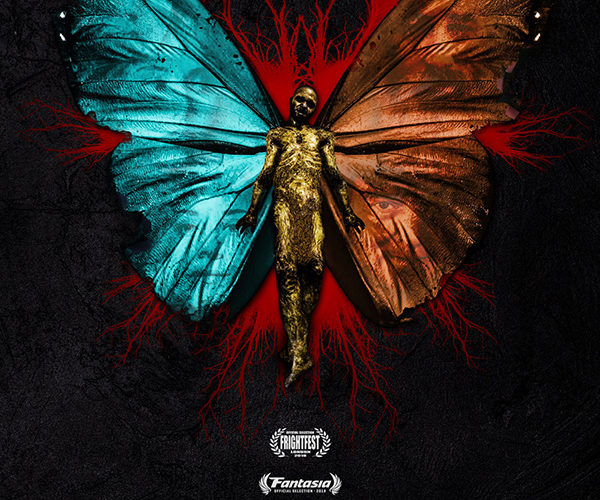 Fantasia Review: ‘Lifechanger’ is a Slasher Flick With More on its Mind

To take Justin McConnell’s horror film Lifechanger at face value is a mistake. You won’t understand this truth right away, though, because it starts out being exactly what you thought. Emily Roberts (Elitsa Bako) awakens covered in blood next to an emaciated corpse as a man’s (Bill Oberst Jr.) voiceover is heard explaining the strange circumstances onscreen. He’s the character we’re seeing before us—a shape-shifter of sorts who must “take” the body (and memories) of another once his latest vessel succumbs to its slowly spreading rash of necrotic tissue. And he’s been doing it for God knows how long, each sojourn through the eyes of a stranger growing shorter as time carries him beyond old age. The need for metamorphosis has now become too abbreviated to sustain.

The first act is therefore rife with turnover as bodies start piling up when necessity renders safety obsolete. He can no longer research his next host, doing whatever possible to ensure the collateral damage each act of murder leaves behind won’t spread too far from the victim he’ll become. Suddenly the pain of death follows him instantly, the decomposition process commencing hours if not minutes after a change solidifies. He’s forced to leap without looking, capitalizing on proximity and owning the risk that the resulting killing spree provides. Because doing this thing once every couple of years can be buried. Doing it every six months can get swept under the rug. Five times in one town within a matter of days? That’s a bona fide ticking time bomb.

McConnell presents this horror scenario with the visual grotesquery you’d assume as each new form hammers out teeth, saws off limbs, and burns the bodies to ash on a farm we assume a “past” life owned. Think a gruesome Fallen sans the snarky trickster angle Azazel lends to its mystery. We receive a sociopathic maniac instead (regardless of his survival depending on that lack of morality) who will not hesitate to silence the real voices of those around him since he can’t quiet the numerous lives forever taking up residence inside his head. His revolving door of vessels run the gamut where acting is concerned and the carnage more or less occurs off-screen to stick under budget. But two constants remain: Oberst’s narration and Julia Watson (Lora Burke).

Her character is where Lifechanger reveals itself to be more than another slasher flick coasting on violence and camp. She’s introduced as our antihero’s cornerstone, a lone vestige of hope within a life overrun by despair. So he visits Julia at her local bar whenever feeling lonely. Whether a man, woman, stranger, or familiar face in the crowd—she draws him close because of a past connection. He yearns for the love they once shared even if it’s impossible to tell her who he truly is beneath the façade. It’s here that McConnell brings in philosophical and spiritual questions about mortality. We learn tragic backstories and emotionally weighty details that intertwine these two with something pure beyond the creepy, sadistic surface no amount of explanation could ever transcend.

The result isn’t perfect—especially after discovering the details surrounding their previous relationship. There’s definitely some toxic masculinity involved wherein the main character feels he’s earned Julia’s love simply because he loves her, but McConnell is aware enough to ensure there are ramifications when their paths have no choice but to merge again. This supernatural being at the story’s center begins showing abstract remorse regardless of whether Julia or the audience is willing to grant him any sympathy. He tries to appeal to our own sense of self-preservation and does have some intriguing things to say about it along the way. But he’s not a good guy. He preys on established victims to more readily acquire them and disposes of their lives without a second thought.

So he doesn’t therefore possess guilt on a per kill basis, just insofar as what his fate has wrought. He hates himself for what he must do, but not necessarily the acts themselves. That’s a fine line with a lot of interesting avenues able to mine his complex psyche, but Lifechanger isn’t trying to move past its genre aesthetic too far to really delve into them. And that’s okay. I think McConnell straddles the line between throwaway midnight horror and captivating thriller enough to satisfy both sides of the aisle. I was personally ready to write the whole thing off after the first twenty or so minutes before eventually finding myself dialed into every conversation with Julia and the thought of where their dysfunctional coexistence could authentically go.

The direction they head is ultimately a satisfying one. As the circle of external interest into the trail of bodies left behind tightens, his admiration for and joy with Julia from afar must also contract. Burke easily proves the best part of the whole because she’s the skeleton key that unlocks his identity—an identity long buried beneath so many throwaway faces. She has plenty of heavy lifting to perform for it to work, but she never takes a false step whether owning her own grief, altruistically helping others, or facing the monster revealed to have been standing in front of her the whole time. Julia is inevitably forced into being his conscience, the unwitting carrier of his burden. And Burke’s three-dimensional handling of that truth exceeds expectations.