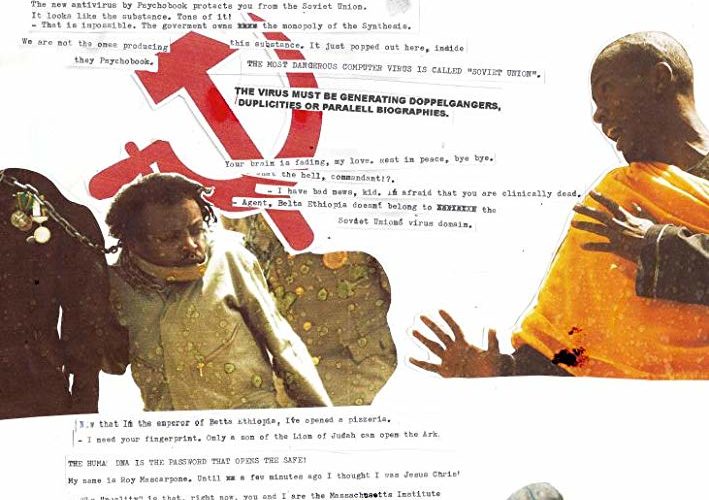 Fantasia Review: ‘Jesus shows you the way to the Highway’ is a Wild Genre Pastiche

All Agent D.T. Gagano (Daniel Tadesse) wants is to retire from the CIA and help his love Malin (Gerda-Annette Allikas) open the best kickboxing joint the world has ever seen. Maybe he’ll hone his pizza-making skills and put a pizzeria next door too if all pans out. Before that dream can come to fruition, however, he’ll need to complete his most dangerous mission yet: securing the so-called “substance” from a computer virus known as “Stalin” (Guillermo Llansó) who’s using it to take control of the virtual reality mainframe Psychobox. Gagano and Agent Palmer Eldritch (Agustín Mateo) might escape with their lives if Commandant Rebane (Lauri Lagle) doesn’t screw them over by following George H.W. Bush’s questionable orders. Or they may end up lost forever within this digital hell. Not crazy enough for you yet? Add an old school, lo-fi B-movie aesthetic with Crumbs director Miguel Llansó at the helm. Then layer two levels of alternate dimensions: one within the Psychobox where everything is shot as though with stop-motion (but still performed in real locales by real actors donning black body suits with cardboard masks of Stalin, Steve McQueen, Richard Pryor and more) and another inside a television show where Batfro (Solomon Tashe in Adam West blue) is some kind of mercenary president. Then watch as Llansó melds science fiction, satire, blaxploitation, animation, and action together with a wannabe Jesus (Guillermo Llansó again, this time as Roy Mascarone) positioned as an anarchist rebel leader seeking to expose a truth we’re too far gone to believe.

This is Jesus shows you the way to the Highway—a wild adventure with all the charm of Llansó’s idiosyncratic debut pushed to its limits for obvious comedic effect (the auditory track has been completely overhauled to English via ADR for instance) that retains an earnestness in performance to both augment the comedy with juxtaposition and subvert it with emotional stakes. It’s therefore the ever-increasingly absurd scenario that makes us laugh rather than the characters themselves. Their line deliveries might be so straight-faced that we can’t help ourselves from chuckling, but there’s no one ever winks to the audience. What’s happening on-screen is life and death for them and they’ll stop at nothing to fulfill their duties either as employed agents or egomaniacal villains desperate for absolute power. Gagano is the only just person left in this world gone mad as the Estonian Rebane goes against his gut and the advice of the professor putting his agents into the mainframe (Iveta Pole) to blindly serve as Bush’s puppet. But is it Bush? The fact that we see him as a cardboard face with crudely animated mouth forces us to believe it’s actually someone from within the Psychobox itself. Does this mean the “Stalin” virus wants Gagano and Palmer to come after him? That he has sensitive material used to blackmail the latter and a desire to clone the former and transport him to Ethiopia would lean towards a “Yes.” To what end, though? Is the “substance” good or bad? And is reality really reality at all?

Llansó lets loose this time around by creating an unforgettable work of creative imagination that often seems to be leaning into its silliness for no other reason than to be silly. While this ensures it could never be as successful in getting its underlying ideas across as Crumbs was, it’s definitely more fun and that goes a long way in getting confused audiences onto a film’s side. I’m not really sure it’s trying to say much beyond its presentation of electronic avatars and their facilitation of digital lives vastly different from our physical ones anyway. A lot of what occurs therefore feels as though it’s happening simply to advance the plot in whatever weird way Llansó has decided to exit the corner wherein he’s currently trapped Gagano. That could mean having the CIA’s artificial intelligence hologram Jiminy (Aris Rozentals) pop up to help or harm; the need to download an identity onto a battery-operated handheld TV-set; or providing invincibility so two Ethiopian war veterans will acquire their emperor prince with the power to destroy their evil oppressor. No matter how off-the-wall things get, though, Llansó meticulously makes it so we can discern where we are by how things are shot: widescreen for reality, stop-motion for Psychobox, and fullscreen for TV Africa. And just because he’ll have a random character arrive out of nowhere for specific expository purposes (Roy Mascarone’s deus ex machina), he does so with complex intent that let’s us understand how Gagano’s roadblocks and avenues towards salvation are ultimately of his own making.

So get excited for a pastiche of cinematic genres, objects, and action as kung fu masters steal the Ark of the Covenant while Batfro takes down drug dealers after taking a dip in his pool. The world within a world hierarchy will get dismantled and copied as characters literally mask themselves to fight for a good and evil we’re never fully aware enough to know which is which. Our only certainty is that Gagano is worthy of our investment and a happy ending despite what appears to be an inescapable series of hardships, betrayals, and impossibilities. And with candy-wrapped keys to unknown awakenings, demonic cats, and credit card reading tongues, anything can and will arise before the credits ignite your own mission to satiate that inevitable pizza craving.

Jesus shows you the way to the Highway is now playing the Fantasia International Film Festival.