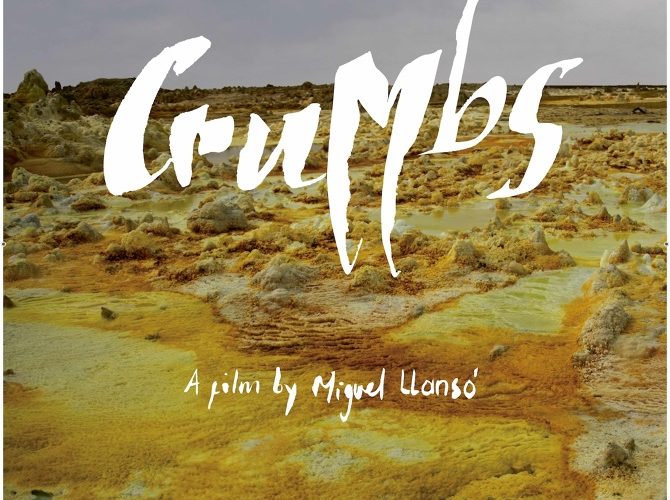 Spanish writer/director Miguel Llansó‘s independent film company Lanzadera Films explains its mission as a firm that focuses on “undiscovered countries, experimental, weird, hallucinatory, poetic fiction and documentary films.” I’d say his feature debut Crumbs is the epitome of exactly that. A self-proclaimed apocalyptic surreal science fiction, it posits a world centuries removed from a great war that’s all but extinguished life. Only the oft mistaken birth from that time remains: a new generation completely ignorant to what society was before the fighting began. They’ve since been gleaning what they can from the overgrowth of dismantled civilizations, creating a new religion based around Michael Jordan. Santa Claus becomes a title passed down through familial lineage and playfully uneducated views on economics place value on Mattel toy swords and implausibly pristine Michael Jackson records. Riddled with absurd details such as these—many of which are showcased in a manner reminiscent to Hitchhiker’s Guide to the Galaxy‘s expository interludes as objects are shown floating in space around Earth beneath “historical” narration teaching us how a TMNT Donatello keychain has now been retconned into a coveted, spiritual amulet—Llanso’s film becomes a keen commentary on the randomness of mankind’s current existence. To us it’s laughable that anyone would worship at a shine surrounding the tongue-wagging visage of arguably the greatest basketball player to play the game pre-apocalypse, but how is he honestly any different than a poor carpenter inspiring orators to compose a book of stories anointing his place as the son of God? If we awoke tomorrow without context for anything our eyes come across, how would we construct meaning around them?

Crumbs proves a uniquely special work chock full of philosophical ideas and unexplained avenues explored in a somewhat half-real/half-fantastical way. Stunning landscapes from another world—as Ethiopia will appear to a majority of Westerners who know nothing about the country—are juxtaposed with anachronistic imagery of a Nazi in a gas mask holding a plastic gun or a Halloween-costumed stranger riding his horse through the desert. There was a catalyzing event we receive the barest minimum of information to gain some footing within and now the world is an empty wasteland of gorgeously decrepit train tracks and rusted over zoos with abandoned statuary begging comparisons to Greece’s monuments to the Gods. Citizens scavenge for remnants of the past to sell and trade in isolated existences while a spaceship that has always loomed above them comes to life. Our entry point into this familiar yet unrecognizable future is a couple in love: the hunchback scrap collector Candy (Daniel Tadesse) and his beautiful fiancé Birdy (Selam Tesfayie). They reside in a bowling alley whose ball return has inexplicably begun churning as well. In it is the voice of an ornery Santa Claus (Tsegaye Abegaz) offering a wish to a good boy or girl. Believing the spaceship has come back online to ready its return flight and thinking himself an alien from a distant planet of quartz caves a la Superman, Candy sets off to find Santa and secure his and Birdy’s spot on the craft. He visits a witch (Shitay Abreha), meets a deaf man that hears random words amidst clanging noise (Girma Gebrehiwot), and a fabled Molegon warrior (Shambel Basha Getachew) along the way.

Everything he does is for his love and she vice versa as divine pregnancies and religious disappointment crop up to throw their ideals on their head. Projected through the surreal filter Llansó has constructed has much of what occurs onscreen teetering between hallucination and misrepresentation as Candy feigns heroics until the reality of his weakness knocks him back to the ground. How much is actually happening is anyone’s guess because, real or not, the journey this might-be alien takes delivers its impression regardless. Love keeps him strong when the red cape cannot; memories tinged by pop culture bolster his identity when the truth of who he was and is comes to light. We all manufacture new personas for ourselves whether to hide from our past or erase it. Candy is no different despite Birdy’s feelings being unconditional. The experience of watching Crumbs is one that’s equally disorienting as it is revelatory. It speaks about what we are and our fallibilities through the absurd lens of those that will follow in our footsteps long after we’re dead and gone. There’s humor to its actions and wars differing from our own by the absence of our misplaced reverence and ego purporting personal beliefs to be truer than others. Llansó’s creation becomes a crystal ball to the inevitable rebooting of society after our current course of destruction comes to its horrific conclusion—an awakening of pure innocence and ignorance showing how humanity will reimagine its salvation around whatever’s put in front of them. Selfish desire still reigns supreme whether through bartering with a Pawn Shop owner (Mengistu Berhanu) for material gains or giving oneself over completely for love.

Tadesse delivers a wonderful character with which to descend into the depths of this wasteland as hope provides him armor to survive. Those surrounding are all selling something: a line of intrigue, a low-ball offer of compensation, or an impossible promise. His Candy believes what they offer because he must to escape the boredom of a life devoid of excitement beyond whatever object he might find next beneath the dust of time. The world is one where the past has been deleted for those who remain to rewrite as they go. Facts are actually theories, prayers, and dreams as mundane encounters imaginatively transform into omens and miracles. In the end, though, home always proves more than one’s environment or aspirations. And no matter what everyone else thinks, we’re forever lions to the ones sharing our heart.

Crumbs is currently playing at the 2015 Fantasia International Film Festival.