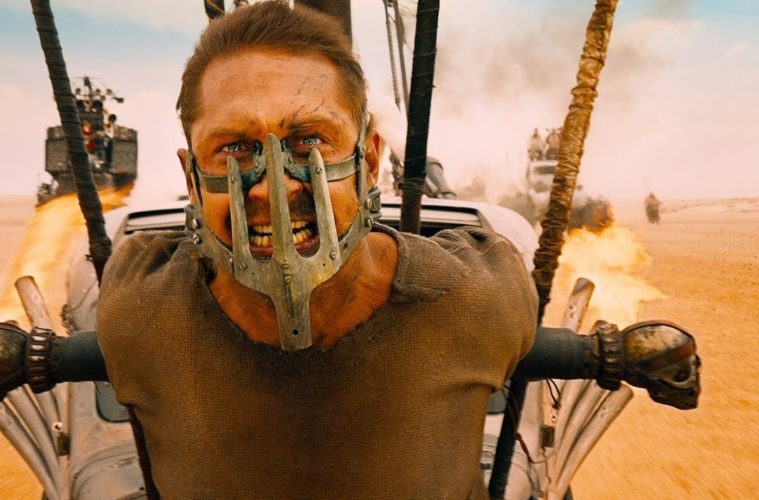 Soon to cross the $300 million global box-office mark and already planting itself as part of the current culture (witness me!), the incredible action experience that is Mad Max: Fury Road has thankfully caught fire. After diving into behind-the-scenes footage, discussing George Miller‘s maniacal masterpiece in-depth, and more (see it all here), today brings another look at the film and beyond.

First up, while Warner Bros. has yet to greenlight a sequel, but Miller has discussed his ideas for at least two follow-ups (which Tom Hardy is signed on for) while on the press tour. After doing his storyboarded draft for Mad Max: Fury Road, Miller tells Happy Sad Confused, “When it came back again, Nick Lathouris is someone who I’ve worked with a lot, whose a dramaturg and writer, and was a great actor back in the day. We really started to dig down deep into the world and write the backstories for everything, even vehicles. Then we talked about and came up with these other stories and then because I had to go off and work on other stuff, I said, ‘Well, don’t write it as a screenplay. Write it as a novella.’ So he wrote a novella on Max. It’s very strong. If this film does well enough and I get the appetite to go back into that wasteland, we could do it.

Along with a full-on prequel surrounding Charlize Theron‘s character of Furiosa, Miller also discussed the timeline of potential sequels. While Fury Road only takes place over a few days, as for future follow-ups, he says, “One happens over about a year and the other happens over several years.” While he doesn’t specify which is which, he does tell Jeff Goldsmith that one will be titled Mad Max: The Wasteland. The possibilities are certainly exciting, so hopefully WB finds the money to give Miller and company, particularly considering the stories seems to be fully laid out.

Back to Fury Road, today we have a new video essay on the editing style of the film. Thanks to Vashi Visuals, he picked apart a scene in which Miller has already analyzed, featuring the first altercation between Furiosa and Mad Max, specifically focusing on how Miller keeps the scene’s vital information in the center of the frame so “comprehending the action requires no hunting of each new shot for the point of interest.” Check it out below.

Following that, much has been discussed regarding the use of practical effects in the film, but another part of its genius is how it seamlessly incorporates visual effects. FX Guide has a breakdown of a portion of the 2,000 visual effects shots in the film, featuring fascinating before and after comparisons. While anyone with the slight bit of interest must read the feature, we’ve included a few of the comparisons below.

While Fury Road is an eye-popping feast of visuals, we’ll soon be able to see quite a different version. Speaking with /Film, Miller says he has “demanded” there to be a black-and-white version of the film on the Blu-ray, which he says is the “best version” of the film. Including “an option to hear just the isolated score as the only soundtrack,” check out his quote below, along with a version of the trailer that imagines what it could look like.

We spent a lot of time in DI (digital intermediate), and we had a very fine colorist, Eric Whipp. One thing I’ve noticed is that the default position for everyone is to de-saturate post-apocalyptic movies. There’s only two ways to go, make them black and white — the best version of this movie is black and white, but people reserve that for art movies now. The other version is to really go all-out on the color. The usual teal and orange thing? That’s all the colors we had to work with. The desert’s orange and the sky is teal, and we either could de-saturate it, or crank it up, to differentiate the movie. Plus, it can get really tiring watching this dull, de-saturated color, unless you go all the way out and make it black and white.

Lastly, cinematographer John Seale and 2nd Unit cinematographer David Burr gathered for the Australian Cinematographers Society to have a two-hour discussion about the making of the film. It’s a deeply technical and interesting conversation leaving no stone unturned when it comes to their masterful work. Unfortunately it’s not embeddable, but check it out by clicking below.

Mad Max: Fury Road is now in wide release. Listen to our discussion above or here.