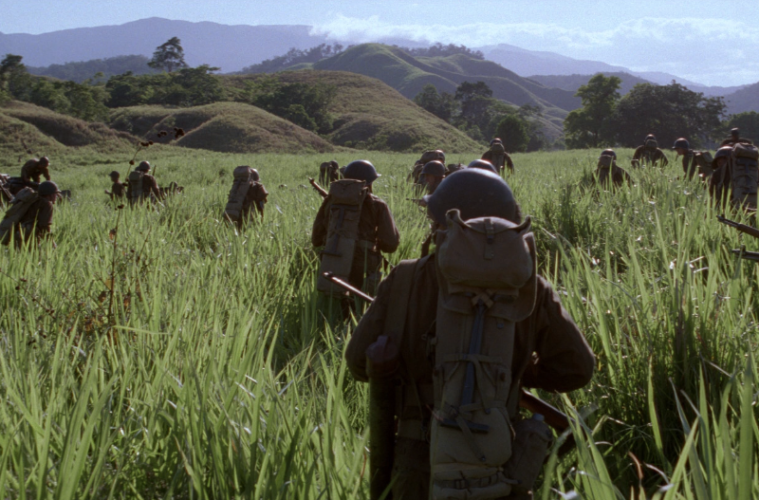 “[Terrence] Malick’s devotion to cinematic sight and sound is equaled by his commitment to the aesthetics of language. The Thin Red Line is about words as much as it’s about anything; more precisely, it’s about the intimate interconnection between word and image, which Malick explores in truly audacious ways, especially in the scenes with voice-overs,” David Sterritt wrote in his Criterion essay for the film. “The more I’ve watched The Thin Red Line, the more unsure I’ve become about how some of the voice-overs correspond with the people on the screen; so many characters have similar accents, speech patterns, and tones of voice that even a key passage like the “darkness and light” soliloquy is impossible to pin with certainty to a particular speaker. This isn’t because Malick wants to separate the characters from their words—just the opposite: he wants to underscore the fact that human beings are bathed in language at every moment, and that language may ultimately be the best, most lasting facet of human experience, able to glide and soar even when the bodies associated with it are dying and decaying in killing fields below.”

Marking his return after Days of Heavens twenty years prior, The Thin Red Line is a masterpiece of a war film, notably for its lyrical depiction of the brutality of the experience and the beauty of nature during the journey. Today we’re exploring the film thanks to a series of video essays and more. First up we have a brief, recent video essay on the staging and representation of leadership and soldiers in the film, comparing the framing to Stanley Kubrick‘s Paths of Glory. Following that, there’s a 27-minute documentary on the laborious, intense editing of film, featuring the editors discussing their favorite sequences and how they came about. There’s also a 20-minute video essay on the role of landscape, nature and environment in war films, focusing not only on The Thin Red Line, but a wealth of war films.

We also have perhaps Hans Zimmer‘s finest work: his nearly 5.5-hour expanded score for The Thin Red Line. While the official release contains only a handful of tracks he worked on with John Powell, the duo conducted hours of music before Malick began production, which he would then use on set with his cast and crew. The final film incorporates a mix of some of the score, but as per usual with the director, a great deal of previous music. However, one can listen to Zimmer’s work in full below. Lastly, we have highlights from the Berlin Film Festival press conference and Siskel & Ebert‘s review of the film, with the latter having conflicted views on the film. As we await release news on Malick’s next trio of films, celebrate one of his greatest films by checking out everything below.

The Thin Red Line is currently available on The Criterion Collection.