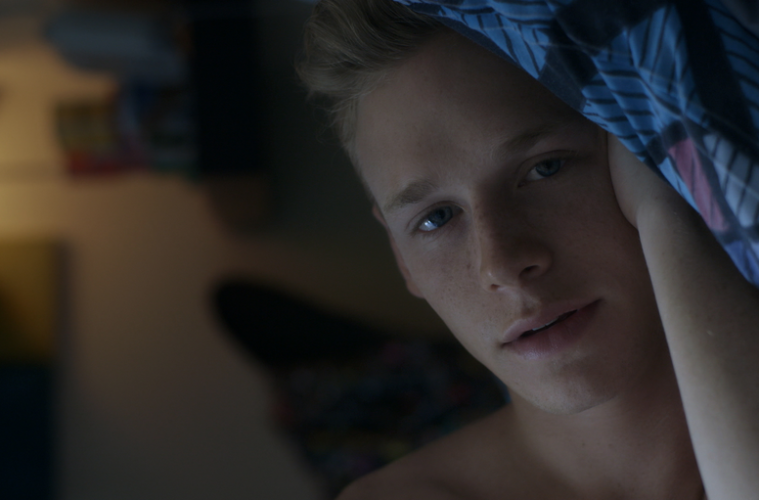 After a festival run last year, Henry Gamble’s Birthday Party, the latest film from Stephen Cone (Black Box, The Wise Kids), begins its theatrical release in New York City today. A coming-of-age picture dealing with sexual confusion, social tension, and the theme of identity in middle America, we were fans of it following its BAMcinemaFest‎ screening, and are pleased to exclusively premiere the theatrical poster.

“The themes we make films about, we often don’t realize are important to us until much later,” Cone tells New York Times. “I’m 35. I haven’t spent the last 20 years thinking I need to tackle these knotty issues that I’ve been dealing with. It’s only lately in the last 5 or 6 years that I’ve decided to focus on some of the ideas and tensions that have been bubbling beneath the surface.”

Check out the poster below (designed by Caity Birmingham), along with the trailer and a scene breakdown by Cone. Screening daily through January 14th at the Made in NY Media Center by IFP, one can pick up tickets here. HENRY GAMBLE’S BIRTHDAY PARTY is an exhilarating ensemble drama centered around the seventeenth birthday of megachurch preacher’s son Henry Gamble. At once a poignant coming-of-age tale and provocative portrait of community, riotous party movie and deeply moving family drama, many threads weave this vast tapestry. At the center of this world lies the confident, music-loving Henry, floating in a world of sexual possibility; his sister Autumn, caught between the spiritual and physical; preacher’s wife Kat, reeling from an affair with an older man and aching for her own identity; and, finally, Bob, evangelical star on the rise, typically optimistic, but sensing his family drifting away. Providing humorous and heartbreaking counterpoint to the Gambles story is a cast of characters from church and school, all trying to wade their way through life, spirituality and identity in the 21st century. Inspired by films as diverse as RACHEL GETTING MARRIED, RISKY BUSINESS and THE ICE STORM, bursting at the seams with music and throbbing with fundamental human emotions, HENRY GAMBLE’S BIRTHDAY PARTY will be an overwhelming experience that audiences will want to return to time and time again.