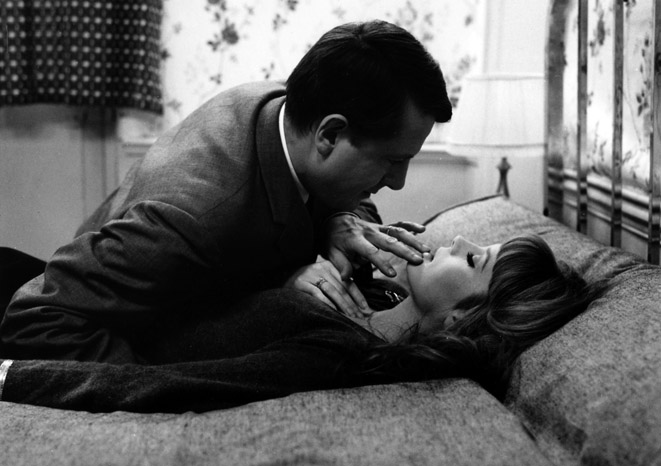 ‘Every Man for Himself’ and ‘The Soft Skin’ Hit Criterion: Looking Into The Wave

Looking at great artists is both a minefield of arduous love and misguided thought. We recognize them as masters without mistakes, every decision (regardless of its merit) another credit to their genius. We love the men (never women) in order to better canonize our chosen art form, all the better for our own posturing via lists, comparisons, and pronouncements. Most alarmingly, we stop looking at and describing the art itself. We repeat oft-handed quotations by others who evidenced the greatness long before, while the work that created our love in the first place fades. We simply stop looking.

I found myself reflecting on this fact while watching the latest additions to The Criterion Collection: Godard’s Every Man for Himself and Truffaut’s The Soft Skin. Both are, in some ways, considered minor works. For those who experienced Goodbye to Language, the closest Godard film they may have otherwise seen was likely his 1967 “fin de cinéma” Week-End. As those who have written about it will tell you, that became Godard’s “second first film,” jump starting a (slight) return to narrative filmmaking and a period that includes some of his best work: Hail Mary, Détective, King Lear. This stood in contrast to most of his ’70s output: documentaries made in Palestine and Mozambique on video, intense discussions of political theory captured by the camera, and works that pushed into almost pornographic territory. (If anything, it is Godard in the ’70s that remains still the most fruitful place of rediscovery, all too simplified by the term “political.”)

Truffaut’s The Soft Skin was made at the height of his powers in 1964, but nevertheless considered his first misstep after the trifecta of The 400 Blows, Shoot the Piano Player, and Jules et Jim. It told a rather classical tale of a literature scholar (Jean Desailly) who falls into a spell of infidelity with a stewardess (Françoise Dorléac). It was only later “rescued” by critics who cited this as Truffaut’s first Hitchcock picture, for the Frenchman was simultaneously preparing the interviews that later comprised Hitchcock/Truffaut.

These are just contexts, however — ways to fill space without ever thinking through films. So what happens when we actually see?

Godard’s picture opens with images of the blue sky, the music (a synthesized beat from Carlos D’Alessio) pulsating us into a strangely erotic trance. It then cuts into the familiar Godard territory: a long static shot in a hotel room, obscuring us from directly viewing the action, but also placing our protagonist, the Swiss TV producer Paul Godard (Jacques Dutronc), in the center of the frame. We know this is Godard because each shot of Paul leaving the hotel feels simultaneously composed and imbued with a sense of realism via amateurism: the lighting is a bit too dark, the soundtrack makes it hard to follow the dialogue (an opera singer won’t shut up), and shots continue long after characters have disappeared from them.

Godard’s Breathless was said to display a romantic view of Paris, but his camera has rarely shown romanticism. Every Man for Himself continues that trend. It contains more lyrical views of nature than most of his films: Paul’s ex-wife, Denise (Nathalie Baye), searches the countryside for a job and, more importantly, a new life. Her introduction is slowed-down and paused (a technique Godard developed during his videotape work in the ’70s), but there is something more to this looking. His filmmaking has always been one based around contradictions — at the same time we gaze at her, we realize we only view her as an image, or, to steal an oft-repeated film-studies term, we notice her “to-be-looked-at-ness.”

Godard has been charged with misogyny throughout his filmography — a statement not without some basis, but one that requires more thought than outrage. Every Man for Himself is (as the title may suggest) one of his most exploratory and unique in its consideration of gender relations. Paul may be the protagonist, but the story is truly about Denise and, later, Isabelle (Isabelle Huppert), a young prostitute who enters the lives of both. Sequence after sequence, Godard focuses on man’s frustration and almost outright anger toward women: Denise observes a young woman forced to choose between two men at a train station; Isabelle is humiliated by her clients into role-playing grotesquely pedophilic games (which recall Paul’s own discussion with a friend about their interest in children); and the film climaxes with a slow-motion thrust of Paul smashing his way to attack Denise across a table. Yet Amy Taubin, in her essay for Criterion, notices a difference in how Godard shoots Huppert and Baye from his other women: “They simply are not interested in attracting us or the film’s director, or metaphorically, the male gaze.” This is not the sad tale of Anna Karina, the prostitute-turned-allegorical-like-Joan of Arc, but women who look at and act out everyday existence.

Every Man for Himself,with its Brechtian detachment,feels like a ’60s Godard film. But it also feels more attuned to what is being shown onscreen. Besides a voice-over from Marguerite Duras, the usual range of philosophers and filmmakers are kept to a minimum. In this way, it’s more inward than outward. Is it also more personal? More autobiographical? These statements would never reveal more about the film. Every Man for Himself simply views the horrors of when we look closer at those often ignored.

Watching is also essential for The Soft Skin. If loving Godard has been framed as a love of cinema, loving Truffaut is a love of mise-en-scène. His films have a general realist tendency that can be traced to his own mentorship with André Bazin: shooting on location, long shots over close-ups, recording direct film sound. But this reading of Truffaut has perhaps lessened his impact in the history of cinema. Truffaut’s films are obsessed with storytelling in a way that differs from Godard’s breakdown of it. Perhaps this is why, as Jake Mulligan has noted, Truffaut has often been supplanted in film canons. To teach his work is to give power to the primacy of the word.

And yet, as Kent Jones notes in his video essay on the disc, “Words and images power each other forward.” Clarity, economy, directness. These are what power the images of The Soft Skin, which passes through time with lustful abandonment. Pierre immediately falls for Nicole, already caught while simply looking, in a close-up, at her slipping into heels underneath a curtain on his plane to Lisbon. He follows her into an elevator to what turns out to be an awkward threesome of gazes. While the camera keeps the shot democratically balanced, we know exactly where his eyes are going. Truffaut focuses on the intensity within Deasilly’s eyes while Georges Delerue’s score navigates the emotional territory in a Bernard Hermann-esque mix of intense passions and subtle sensitivity.

The influence of Hitchcock on The Soft Skin, which Jones deconstructs, has often been accredited to its thematic weight of violence, its beautiful women, and its occasional thriller attitude (especially in the runaround sequence at a hotel in Reims). But if we see Hitchcock in Truffaut, it is because of the camera’s gaze: his direct way of telling a story (a close-up of a hand turning on a light, and another immediately turning it off), swerving his camera through spaces with intensity. Another director may have been more passive. The camera thus unfurls this narrative much more than any dialogue could begin to register. When Pierre writes a declaration of love to Nicole and then spots her, Truffaut cuts from her face to an insert of the note, then out to Paul’s face, all before panning down to him crumpling up the note. With words, it would take minutes to describe what is registered by the camera in a matter of seconds.

This is to say that Truffaut shoots and edits with emotion, a dangerous territory that is all too mistrusted (not to mention misused) by most critics. But Truffaut was ultimately interested in human stories, and, as Jones explains, we are “left with a sense of extremely fragile, flawed but precious, throbbing, humanity.” The Soft Skin ends with an emotional gusto — an inevitable finale, but one with purpose, told with the same sort of paradoxically opaque clarity by the camera seen at the climax of Jules et Jim. Critics dismissed The Soft Skin as simply “bourgeois melodrama,” but what happens when we actually sit, look, and describe? Cinema happens.

Every Man for Himself and The Soft Skin are both available on Criterion.