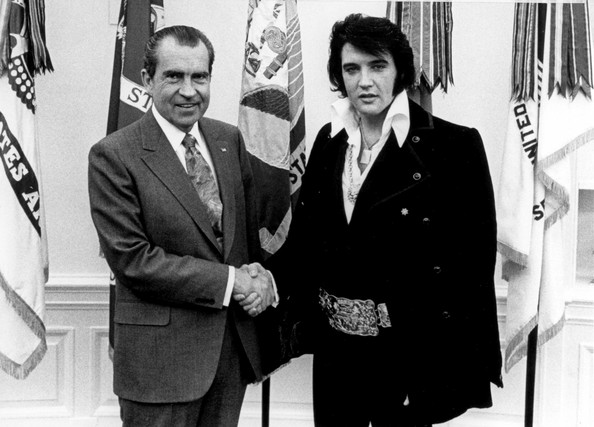 After appearing in Joe Wright‘s action thriller Hanna, it looks like Australian actor Eric Bana will be stepping into some blue suede shoes for his next film. According to Variety, Bana will star as the rock ‘n’ roll icon Elvis Presley in Cary Elwes‘ directorial debut Elvis & Nixon. Danny Huston, most recently known for his role as Poseidon in Louis Leterrier’s Clash of the Titans, is still in negotiations to star as the Nation’s 37th President, Richard M. Nixon.

Cary Elwes (The Princess Bride, Robin Hood: Men in Tights) was so inspired by the historical meeting, that he decided to challenge himself by making it his first film as writer and director, employing Joey Sagal and Hanala Sagal to write the script with him. Presley and Nixon first got together on December 21st, 1970, where the meeting was first initiated by Presley himself. After asking Nixon for a Bureau of Narcotics and Dangerous Drugs badge, Presley vowed his devotion to America and gave Nixon family photos and a Colt 45 pistol as parting gifts.

I’m a little skeptical of how Bana will handle portraying such a iconic historical figure like “The King,” but his career has shown promise in recent years, with his starring roles in Steven Spielberg‘s Munich and J.J. Abram‘s blockbuster hit, Star Trek.

Imagining Huston as Nixon is a less concerning than Bana as Elvis, but he does have some big shoes to fill, taking into account Frank Langella‘s Best Actor nomination for his portrayal in Ron Howard‘s Frost/Nixon.

Bana will also act as the film’s executive producer through his own company, Pick up Truck Pictures. The company was first credited in Bana’s 2009 directorial debut, Love the Beast. Elvis & Nixon will be their first U.S. production and although the start date is still unknown, production will take place in Los Angeles and Shreveport, Louisiana.

How do you think Bana will handle his role as Elvis Presley?