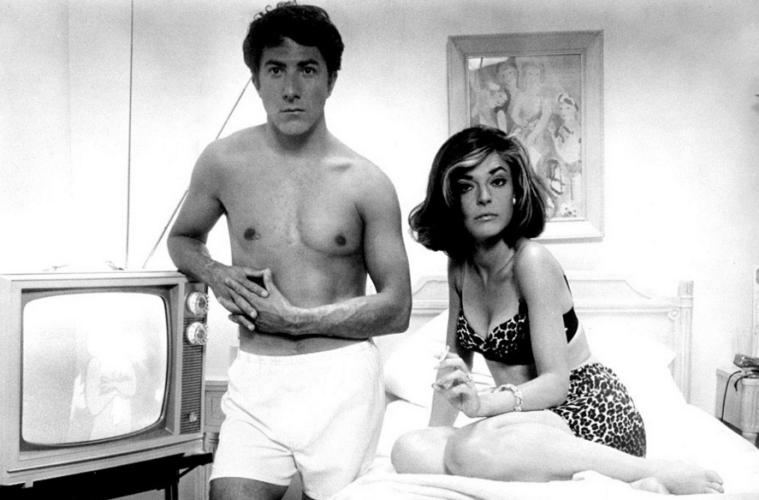 Though The Graduate upholds some of the classic tropes of Hollywood romantic comedy dating back to the 1930s—especially in its climactic deployment of a runaway bride—Benjamin’s paralyzing emotional disconnect from the world around him is what makes his story both fresh and particular to its own time.

The New York Times‘ feature on what it’s really like to work in Hollywood if you’re not a straight white man:

Now, when I think back on Safe [1995], for example, what a radical idea that was, to make a sort-of-commercial, sort-of-not movie that neither side could sort of embrace. And neither side did when it came out.

TIFF‘s Tina Hassannia on women in the films of Abbas Kiarostami:

Look at the recent films of Iranian filmmaker Abbas Kiarostami, and you’ll find many prominent women characters. Shirin is an experimental exercise in which we watch women (mostly Iranian actresses) watch a film — a classic Persian love story that we can only hear off-screen. Filmmaker Mani Akbari plays one of several characters in Ten whose personal struggles, shared freely in the private space of a car, depict a contemporary cross-section of what it’s like to be an Iranian woman. Kiarostami’s films made outside of Iran focus on non-Islamic heterosexual relationships: Certified Copy shows the very different stages of a relationship, presented paradoxically within the same afternoon that supposes James Miller (William Shimell) and his lover (Juliette Binoche) have just had a meet-cute, and/​or are embittered ex-life partners. Like Someone in Love illustrates the many forms of love one can find via an old professor who seeks tender companionship from a troubled young prostitute, Akiko (Rin Takanashi). But the film is more uncanny in its sympathetic depiction of Akiko, whose relationships with her suave pimp and territorial fiance present a disturbing picture of gendered dependence.

Criterion‘s Alexander Stille on I Knew Her Well:

Antonio Pietrangeli’s I Knew Her Well deserves to take its place in the canon of classic cinema that defined Italy in the 1960s, alongside such films as Federico Fellini’s La dolce vita, Pier Paolo Pasolini’s Mamma Roma, Michelangelo Antonioni’s L’eclisse, and Dino Risi’s Il sorpasso. Like those others, it describes the country at a moment of crucial transformation—a period of economic boom in which a poor agrarian society found itself becoming a richer, urban one. The peripheries of cities mushroomed with anonymous-looking high-rise buildings, and Italians, enjoying the sudden wealth, zipped around in flashy convertible sports cars, in a moment of dizzying, disorienting freedom. There is Vittorio Gassman giddily passing cars on Rome’s new ring road, Marcello Mastroianni wooing Anita Ekberg in his Triumph convertible, moving between the Baths of Caracalla and the Trevi Fountain. The Alain Delon character in L’eclisse is epitomized by his Alfa Romeo Giulietta, which is stolen and has to be fished out of the Tiber. In I Knew Her Well, we are presented with this same world in transformation but from a different angle. And so, early in the film, we see Adriana, played by Stefania Sandrelli, sitting in an armchair atop a car belonging to a furniture company, moving at full speed, feeling the exhilaration of the night air rushing by.