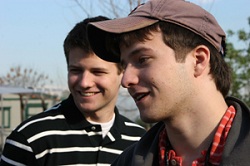 The duo have written and directed various short horror films including, 2005′s We All Fall Down and Eater in 2007. The current project will act as the brother’s feature length directorial debut, which is scheduled to start in early 2012.

Hidden is a horror-thriller about a family forced to hide out in a bomb shelter after escaping an odd outbreak. Roy Lee (The Departed), Mason Novick (Juno) and Lawrence Grey will produce the project, with John Middleton and Sebastian Aloi serving as execudive producers.

Even though the Duffer brothers are relatively young, their careers do show promise thus far. The fact that their first feature script was picked up by Warner Bros. says a lot, not to mention that they have famed horror producer Roy Lee, also of The Ring and The Grudge, on their side.

Their short film Eater can be viewed on their Vimeo page.

What are your firsts thoughts of Hidden? What do you think about their fast success?