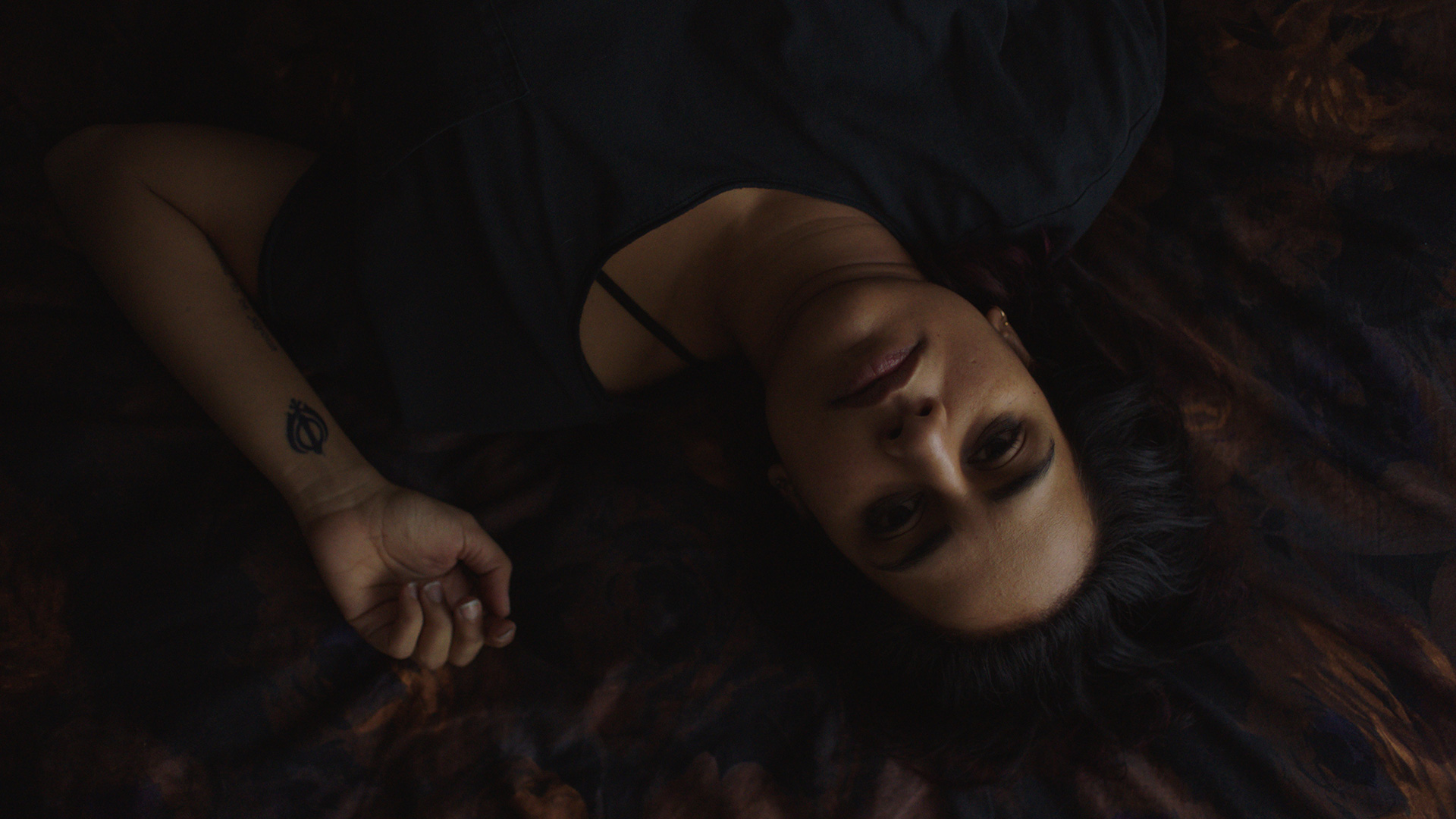 You see it often. The “successful” children leave to start families of their own and the so-called “donkeys” (or khotas in the case of this Punjabi household) are left caring for the parents that were hard enough on them to make the level of compassion necessary to do so tough to understand. Mona (Agam Darshi) was the black sheep in many ways growing up. She was the artistic type. The rebel. The “lesser” twin. Growing up in a Sikh home with a demanding father (Marvin Ishmael) and more pliable and obedient siblings (Husein Madhavji’s Rup, Sandy Sidhu’s Sandy, and Stephen Lobo’s golden boy and “best” twin Parm) meant discipline, screaming, and beatings. So why did she stay? Why nurse him through seven years of cancer? Love is complicated.

So too is Darshi’s directorial debut Donkeyhead. Her Mona is a failed writer (the details of which come out during the course of the film) living at home with her ailing father, desperate to finally win his affection. He tells her to marry and leave. He’s probably been telling her that ever since she moved back in, but she stays anyway. Through the false alarms when slumber appears like death. Through the bedtime accidents demanding a shower and change of sheets. Through everything. They still argue, but you can sense the respect that has grown. He still won’t say he loves her—at least not when she’s in the room and able to hear it—but we know that Mona knows. Love has always existed beneath the rest.

And if he gave Mona anything genetically speaking, it was stubbornness. When a stroke lands him in the hospital with strict instructions for a natural death, she takes him home and jury rigs a makeshift IV stand despite him being in a non-responsive coma. So, out come the siblings. Parm from London, Sandy from New York, and Rup from Toronto. They’ve visited Saskatchewan every once and a while, but never long enough to truly understand what it is Mona does for their father. They surely know it in their hearts, but ego, guilt, and pride make them dismiss it if only to not feel bad they didn’t help more. Telling her what they’ve come to say is therefore difficult. They want to let him go. She can’t yet.

The reasons transcend the usual “family reunion at a funeral” conventions, though. Mona has been trying to escape the reality that she’s yet to build anything of her own for decades. She cares for the man who thought of her as a failure. Romance comes in the form of a married man (Kim Coates’ Brent, also the lawyer in charge of her father’s will). And her career as a writer has all but dissolved thanks to never fulfilling the obligations of her first and only advance. One could assume then that Mona stayed to better position herself for the inevitable inheritance. Except money has never been a motivating factor in her life. Maybe it wasn’t because her siblings bailed her out. Maybe because it only makes things worse.

This is about the emotional and psychological trauma of childhood and finding a place in her father’s eyes she doesn’t believe she found (or was allowed to find) while growing up. Mona wants to prove herself and in so doing becomes trapped in the past. It’s why Darshi describes her film as a coming-of-age story not “wasted on the young.” Because while Mona attempts to reckon with her past, her siblings reckon with their present. Each has a secret. Each has been lying to themselves. Each has decided to pretend things weren’t so bad while Mona has been left alone with reminders every day of her life. There’s no better setting for release than amongst devout relatives reading from the Sri Guru Granth Sahib for three days straight.

That juxtaposition is one of the best parts of the whole because it allows Darshi to reconcile cultural tradition with personal identity. We laugh when Mona refuses to let her aging Aunt (Balinder Johal) pray for her brother’s soul because of how overly dramatic things get via the overlap. Mona laments that they’ve been doing this prayer for months with no results. Aunty feigns ill health from the grief of being barred from practicing her religious duty. They’re both playing to the crowd of newcomers (How can Rup, Sandy, and Parm not side with their elder?) until one of them must blink first. It’s the perfect type of humor for this scenario because the hurt amplifies the sarcasm and deflection. And that in turn augments the impending catharsis.

Because Mona must accept his loss. She needs her father to go so she can restart her life without the excuse he’s provided. The others must too by facing their own fears such as whether who they are (successful in sales rather than medicine, ashamed of ethnic features removed through plastic surgery, or overcompensating religiously to hide their true sexuality) can be enough for the people they were so afraid to disappoint in youth. Being far away meant they could hide without having to explain themselves or risk being found out—a luxury Mona never had nor needed considering she was always the “disappointment” and thus freer for the trouble. Maybe they all need their father to wake-up if only to finally admit their truths before he goes.

In so doing, however, they must also admit as much to themselves. So, no matter how funny Donkeyhead can prove, it’s also quite devastating. Mona and company have decades of pent-up frustrations ready to be unleashed and none of them hold back as far as forcing each other to confront their respective failures, flaws, and hypocrisies. Maybe she was the one who got the brunt of their father’s abuse, but they all grew up under the same shadow. Just because the other three were able to survive it better doesn’t mean they avoided scars. And just because Mona may look upon them with jealousy and resentment doesn’t mean they don’t look upon her with the same. They’ve all made mistakes and that’s okay. Pretending otherwise is the problem.