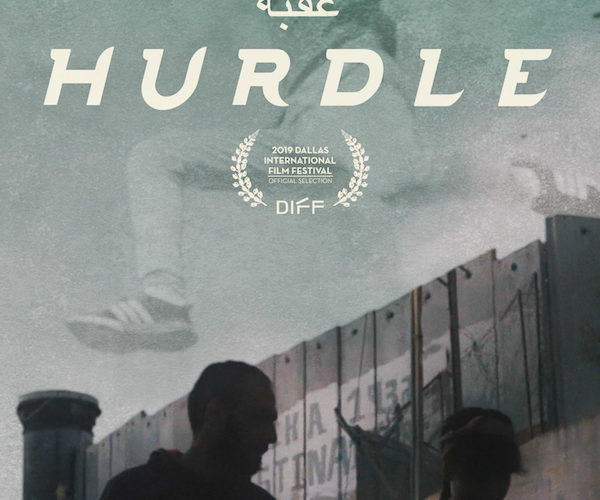 What’s it like to practice a sport build on freedom and expression in a highly oppressive environment where being a young man equals having a target on your back? This is the central question of Michael Rowley’s Hurdle, an evocative documentary exploring the lives of a Palestinian parkour team and their two teachers Sami and Mohammad. Unlike the young man at the center of Hany Abu-Assad’s Omar–a narrative drama in which a young man used parkour-like tactics to scale barriers that keep him from his love–they use the sport as a means of freedom of expression. Boxed in by walls that would appear to tower six stories, they face unprecedented political oppression as the occupation turns fifty and grows increasingly violent.

Hurdle mixes politics and history in both Jerusalem (where Sami leads his team) and in the Aida Refugee Camp in the West Bank (where Mohammad, a storyteller and photographer, operates). The divide between these two worlds is sharp with Sami, self-taught via YouTube, encouraging his students to use the urban landscape to tell their story via self-expression, while Mohammad, strewn with battle scars on his face, chooses resistance in the form of photography and videography. Rowley effectively captures the frustration of these young men, both community leaders, encouraging a form of non-violent resistance for now. The act of calling attention to oppression itself can be a violent act as the film takes a dangerous turn in the wake of protests while half the country celebrates fifty years of sovereignty.

The film lingers on the politics of oppression, finding only a few moments dedicated to the sport that brings them together, including a transcendent ballet that ends the picture–it’s one the rare times it breaks form. Hurdle doesn’t use a landscape ravaged by conflict as a stage for purely aesthetic reasons of cinematic poetry but rather explores the resistance movement and sport as an adjunct for protest. While it ends with a competition, it’s not the central driving force, avoiding the kind of sweet artificial sweetener of a sports movie loaded with tropes where the underdog rises up and there is peace in the world. If that were the case here, its subjects most likely would disown the film. While Hurdle captures the conflict with an immediacy and intimacy, finding two interesting characters, it never quite feels whole, allowing mostly only its two subjects to speak on camera about the work they are doing between an often sweeping political overview. I only wish the film would have taken a little time to develop a few more characters in this saga, but perhaps it is unfair to fault a filmmaker for a risk he didn’t take, when making the film itself is a risk.