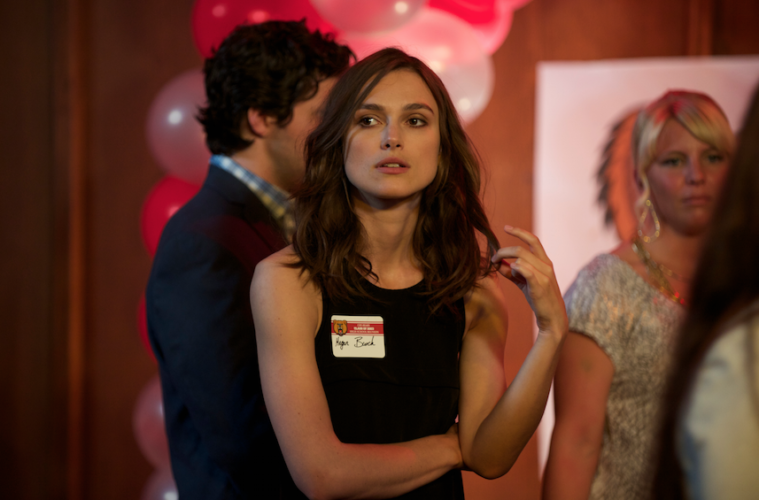 For years now Lynn Shelton has mostly been directing largely improvised pictures. The director behind Humpday, Touchy Feely, and the fantastic Your Sister‘s Sister has now made a change of pace with her latest film, Laggies. The story of a young woman, Megan (Keira Knightley), marks the first film Shelton didn’t write herself, and one that sticks mostly to the script. Written by author Andrea Seigel (The Kid Table), Laggies is about a misunderstood 28-year-old “womanchild” who’s not quite sure what she wants out of life yet.

The decisions Megan makes are often immature, contradictory and harmful, but Shelton and Seigel paint a very warm and empathetic portrait. It helps that they have Keira Knightley giving one of her most relaxed and effortlessly charming performances to date. She’s surrounded by the likes of Sam Rockwell, Jeff Garlin, Chloe Grace Moretz, Ellie Kemper, and more in Shelton’s sixth feature film.

We recently had the chance to discuss Laggies with Ms. Shelton. Here’s what she had to say about why Megan isn’t a womanchild, making her own film out of someone else’s script, and more:

Do you consider Megan a womanchild? I think she’s been made to feel like a womanchild because she lives in a society that values…she’s surrounded by all her old High School friends, who are following this conventional path. They’re doing all the things they’ve been told they should do, but she’s just marching to the beat of a different drummer, and she doesn’t have anyone around her doing that or someone telling her that’s okay. Everyone is pressuring her to be another way, to be someone she doesn’t feel is right for her.

She’s made to feel like a womanchild. She’s made to feel immature, but she’s really not. She is maturing. She is mature. She’s mature enough to realize: “This isn’t working for me. I need to take a step back and figure this all out.” It’s not failure to launch. She’s not hanging back for the bad reasons, but to avoid the bad decisions. It takes her a while to realize: “I’m actually not doing something bad.”

She’s very happy and content at the start of the film.

Yes. She just finds she’s not on the same page with those around her. She just starts to ask, “Is there something wrong with me? Is there something wrong with them? What’s wrong here?” [Laughs] It may seem like an odd choice to hangout with these new teenage friends — and the father of one of these friends — but it actually presents her an opportunity to be in the presence of people who let her be herself. She gets to discover what that feels like.

Even though you didn’t write the film, your voice is definitely a part of it. When you read the script did it feel like a story you would’ve told?

Absolutely. I would’ve written it differently, but just that territory…I had already made a few high-concept movies that, on paper, don’t look like they would work. My challenge to myself was to create human beings and tell a story that’s surprising, and make it all feel believable. When I read script it was the same thing, where I thought, “Wow. Here’s this great concept that doesn’t seem like it would work, because she just makes all these surprising and different choices along the way.” I believed everything, though. Everyone felt very real. The humor came from a very character-based place, as opposed to contrived set-pieces.

There was these amazing moments. One of the scenes that really got me…I’m trying not to give anything away, but there’s a scene with Gretchen Mol that was just so genius and from so left field. The way the scene played out made me think, “I don’t know if I would’ve thought to write it in that way, but…wow.” Andrea’s writing and ideas…she’s just so brilliant. She was so easy to work with. The only other time I’ve worked with other people’s scripts has been on television, which is the domain of the writer. On television, I’m fulfilling someone else’s vision. Andrea had to remind me, “Hey, this is your baby [Laughs]. You don’t have ask me for permission if you want to change anything.” It was really nice of her to remind me. It was a new experience of having to convert her script into my own movie, but it ends up being a great collaboration.

A few years ago were you hesitant about directing someone else’s script or has it been about finding the right material?

I had been reading scripts. After Humpday and Sundance I got an agent and a manager, and they all sent me a lot of scripts over a year. It’s so rare I find a script I connect to. This actually didn’t need a ton of work. I had experiences where I’ve read a script and felt, like, “Would it work? Maybe.” For the most part, I’ve ready so many great scripts and really great stories, but I just didn’t feel that personal connection. This was one of those rare exceptions. It’s not like I’m on the search for it, really, but more like I read scripts and, if something really sticks out to me, then I might pursue it. I’ve made five movies where I was the writer, so it’s not something I’m on the lookout for. At the same time, I was excited to take on this new challenge.

The improvisation on your past films definitely helped create a sense of realism. When you’re going off almost entirely what’s on the page, how do you capture that a similar spontaneity?

Well, it starts with a script that actually feels like something actors can make feel like it’s coming out of their mouths [Laughs]. It starts with the writing. Then it’s casting actors who can really find the overlap between themselves and the characters, and I felt I had lucked out in that department. I have just the highest of praise for all the actors. Then, yeah, there’s Andrea’s lovely writing. There were definitely ad-libs or a little addition, but maybe 3% or 4% of the film. In general, we didn’t really feel the need to do that, though. It was all working on the page.

You still root for Megan at the end to work things out, even after a few not-so-great decisions. That’s tough to do, but Keira Knightley pulls it off. What convinced you that she could help keep an audience empathizing with Megan?

You know, the Keira I cast was honestly the Keira I remembered 10 years ago when I saw her in Bend It Like Beckham and the first Pirates of the Caribbean. Finding out she was 17 after that I was just so floored by the confidence. She’s just so loose-limbed and comfortable in her body. She just had this naturalism, which she’s managed to maintain. I feel like I believe her in all her roles, no matter what she’s doing. The thing about the period pieces… [Laughs] not only is she often in a corset or whatever, which means physically bound, but a lot of repression of emotions and her personality. I don’t know… I just went into it thinking about those early days. Those were funny, too. There was humor in her performances. It was delightful to see my instincts were correct! She was able to tap right into it, but she’s very much like that. She’s comfortable with her shoes off and cross-legged [Laughs]. She’ll curl up in a chair, as opposed to [English accent] being a lady. She was perfect for the character.