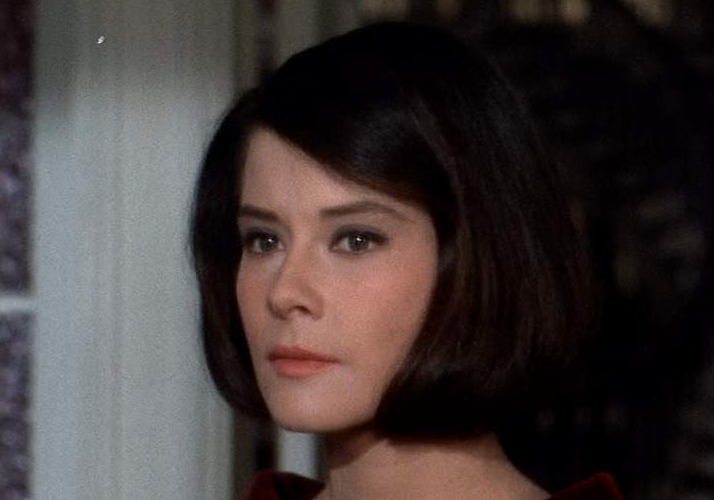 This Sunday, actress Diane Baker will appear at Film Forum in New York to discuss her 50-plus year career in film and television with film historian Foster Hirsch. On Monday at 8:00pm she will again be at Film Forum to introduce a screening of Alfred Hitchcock’s 1964 film Marnie.

Still just in her mid-twenties, actress Diane Baker found herself one morning in the unfamiliar surroundings of Alma and Alfred Hitchcock’s Brentwood kitchen. They ate peaches around the kitchen table and discussed director Hitchcock’s next picture – Marnie. “I was offered the part without reading the script,” Baker told me on the phone from an apparently sunny San Francisco. “I just happily accepted. Whatever it was, I was going to do it.” But looking back who can blame her? This was, of course, the director whose five previous films had been The Birds, Psycho, North by Northwest, Vertigo and The Wrong Man, but like all old Hollywood tales it wasn’t all just peaches (sorry). “I remember vividly Alma bringing out a magazine and showing me a picture of Grace Kelly. She looked at me and said you resemble her so much — the only difference is that she has light hair and you have dark.” With Hitchcock’s offer to tempt Kelly back into acting rebuffed by her husband, Prince Rainier of Monaco, and his relationship with Kelly’s original replacement Tippi Hedren growing colder by the minute (today Hedren claims that Hitchcock ruined her career), did Baker ever suspect that she was being groomed by the director of Rear Window to be his next long term leading lady? “Yes, I had a feeling for the first half of the film that that was what he was trying to do. I think he was trying to find a future actress he could turn too, but I was not interested in a personal contract, nor was I interested in continuing to do this type of film.”

In Marnie, Baker played the conflict-causing Lil Mainwaring, the sister-in-law to Sean Connery’s Mark Rutland. There’s a lot of sexual suggestion to her performance, especially towards Connery’s Rutland, but what goes on under the surface seems more important to both Baker and Hitchcock. It’s a performance that draws comparisons with her debut role in George Stevens’ 1959 film The Diary of Anne Frank, where, again, instead of showing her character’s feelings she subtlety suggested instead.

In interviews, Hitchcock would often remark that actors should be treated as if they were cattle, so what was he like with his actors on the set? Baker, who is now Executive Director of the Academy of Art University’s acting school, dismisses this cattle herding image and says she uses a lot of Hitchcock’s methods in teaching her 250 or so students, comparing Hitchcock with Elia Kazan. “If he wanted you to be angry he would sometimes provoke you to a state of anger. I remember one scene where I had to be strong and furious. He just stood there and wouldn’t look at me or wouldn’t talk to me before the take. He would look as if he was talking about me to someone else. He would then look over at me to make me feel nervous.” Was this effective? “Later on I realized it was all a tactic, but it added an extra element to the scene.”

Baker, who worked alongside Anthony Hopkins in The Silence of the Lambs (“Love your suit”) was not all too convinced with his portrayal of Hitchcock in Sacha Gervasi’s 2012 biopic, saying, “I know that Anthony is a brilliant actor and I really loved working with him but there wasn’t much in his performance that reminded me of Hitchcock — it wasn’t Hitchcock, Hitch was somebody else.” Who was the real Hitchcock? “I felt that he was a man in a lot of pain; he was often exhausted. There was another world going on inside him that Anthony didn’t quite find.”

As well as Hopkins, Baker, a two-time Golden Globe nominee, also acted alongside the likes of Gregory Peck, Paul Newman and Joan Crawford. But what about the current state of acting? “We don’t have stars today,” Baker says. Whereas the contract stars of the studio days “worked harder” and had a more “honest understanding of the craft,” today’s Hollywood bunch are too easily distracted. “It’s all about money now,” she says. “I’ve seen actors on sets physically run to call their agents when they read in the trades what other actors are earning.” Ego can also be a problem, as she adds, “I’ve known actresses to go out into the night measuring trailers to see how much longer the star’s trailer was compared to their own.”

In 1985, Baker received an Emmy nomination as executive producer of A Woman of Substance, a miniseries with a cast mainly made up of British actors, most notably Deborah Kerr. To Baker, actors from the U.K. are simply superior to their American counterparts, ‘There’s a certain level of concentration and focus that they bring. They break through because they are so dedicated to the art of acting. They’ve all gone through serious training.” Although in Baker’s eyes, no one still comes close to Meryl Streep, “She makes things look effortless and yet she’s still a normal human being. She lives a normal quiet life and she works.’

Streep seems to be working consistently, but as for the other female actresses out there, Baker seems more optimistic than most: “They’re happening, they’re finally happening.” But talent goes a long way, “If you’re really good you’ll make the roles for yourself.” Cinema, as everyone knows, is a director’s medium and directors need to start pulling their weight. “George Cukor was a woman’s director. He had the capacity to direct women beautifully and if those roles are on the verge of being there again for all of us then we need the directors who can make them brilliant. There used to be wonderful roles for women — look at Barbara Stanwyck’s career. Now we have a chance again. We’re starting it, we just have to keep moving it forward.”