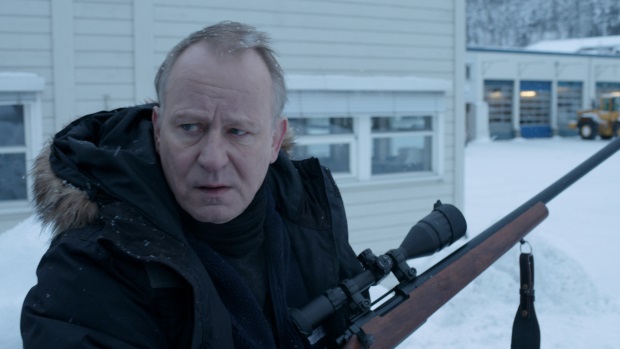 Dark Wit and White Snow Collide in U.S. Trailer For Norwegian Thriller ‘In Order Of Disappearance’

If you like tales of bloody revenge, sharp wit, and Stellan Skarsgärd murdering people, we have the movie for you. In Order Of Disappearance, which has just been given its first U.S. trailer, is a Norwegian thriller that follows a fathers quest for revenge after his son is murdered and the incident is framed as an overdose. Bouncing around the festival and international circuits before being acquired by Magnolia Pictures, they’ll finally release it later this summer.

With a pitch-black wit and a cold, pale color palette, In Order of Disappearance looks to be a solid piece of revenge cinema. We said in our review: “The film simply wouldn’t work if it didn’t have layers that improved upon the simple story of a father seeking revenge. Thankfully, In Order of Disappearance is filled with so many twists on what you expect that it feels refreshing. Beautifully shot (the snowplow and blower scenes in particular), clever and darkly humorous, this is a well-told crime film (thanks to Kim Fupz Aakeson‘s script) that brings serious chops when it comes to comedy and particular set pieces.”

In related news, Deadline reports that Liam Neeson is set to star in an English-language remake of the film.
I recently discussed my reservations about Americanized adaptations, with hollow and uninspired cinema often the result. However, my belief in good filmmaking overshadows any general principal, so there’s a chance Neeson and co. could pull something worthwhile out of the affair, especially with the material being right up his ally: an old lonely man, a sins-of-the-father conceit, and of course, bloody revenge. In addition, with director Hans Petter Moland returning, it will be interesting to see how he tinkers with his own material, and how or if an American studio will interfere in his vision. The original producers are also attached, so chances of a unified vision does seem likely, but one can never be sure with the American market.

See the trailer for the U.S. release — which includes quote comparisons to Tarantino and the Coens — along with a poster.

Introverted and hard-working snowplow driver Nils has just been named “Citizen of the Year” when he receives news that his son has died of a heroin overdose. Disbelieving the official report, Nils soon uncovers evidence of the young man’s murder—a victim in a turf war between the local crime boss, known as “The Count,” and his Serbian rivals. Armed with heavy machinery and a good dose of beginner’s luck, Nils embarks upon a quest for revenge that soon escalates into a full-blown underworld gang war, with the body count spiraling ever higher and higher.