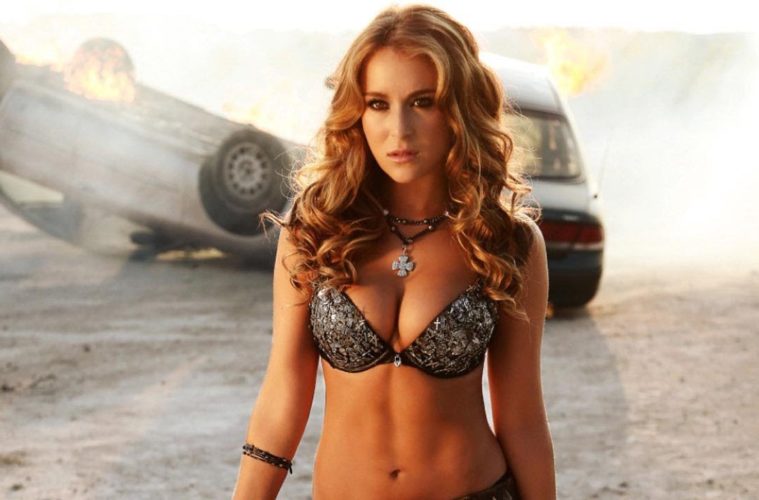 Delivering the violence, babes, guns and blood you’d expect, Robert Rodriguez‘s Machete Kills hits theaters this Friday with a heavily expanded cast, from Lady Gaga to Mel Gibson. When I had confirmed the interviews with Machete himself, Danny Trejo, along with co-star Alexa Vega, who is best known for her role as Carmen in the Spy Kids franchise, I knew I wanted to have some fun with them.

They’ve been making movies together for awhile, so instead of the mundane route, I decided to wrap up my interview with a little contest to see how well Alexa knew the character Machete. I quizzed her whether Machete would use turn signals, add cream to his coffee, whether he wore boxers or briefs and more. More surprising than anything was how quick and on-point the actress responded. Below you can see the results of a standard interview, including a discussion on the director’s portrayal of women and Vega’s jump from Spy Kids to this project, with a fun spin at the end.

So, one thing that’s pretty awesome about this movie…

Danny Trejo: Is her… [points to Alexa]

Alexa Vega: Aww, I love you!

You’re front and center on that poster, right?

Vega: Yeah he is!

So, I’ve got to ask. The first one, and now the second one. Do you have these framed [posters] somewhere sitting at your house?

Something else that is great about this film is that when you go off to shoot something for however long it takes, four months or whatever, when you get done you may never see those people again.

But you have come back together continually.

Trejo: It’s been a family for years. I’ve known her since she was eleven.

Of course it seems like you get to spend time with each other again. But on the acting side it’s nice because there’s a familiarity.

Vega: Yeah. You’re so comfortable. I think that’s why it’s so easy for people to want to come and work on a Rodriguez film because they know… first off, how well he shoots women. For the women on set, they know they want to be on a Rodriguez film. But also how comfortable that environment is. There’s nothing pretentious about his set. There’s nothing Hollywood about his set. It’s truly like a home, family kind of vibe. Right down to him cooking for everybody and bringing people goodies. People have their kids on set. It’s always comfortable. There’s never this, “I’m going to go to work” feeling. On that note, you haven’t made a film with him in a while. Were there big changes you weren’t expecting from all the Spy Kids films?

Vega: You know, I think it was harder for everybody else only because of the role I was playing. It took a lot of convincing to even have Robert let me come onto the project. I called him up and I’m like, “Look, I love playing these young roles and I’ve been doing it for a long time. But I’m having trouble because people keep picturing me as this young girl and these more mature roles are going to these other girls because they just don’t see me in these kinds of roles.” So I went, “So, are you shooting Sin City yet?” And he goes, “Absolutely not! You’re not doing Sin City. But I am shooting Machete Kills. Come check it out. There’s a very small role.”

And that was a role originally intended for a local in Austin and I think they had one line. “If you’re comfortable, I’ll have you mostly in the background and if you’re feeling good I can have you come forward a bit and if not you can just hang back.” From the moment that I put that outfit on I knew that if I didn’t walk out there with every bit of confidence or I showed any bit of hesitation, he would have had me back home. [Laughs]. So I had to walk out there and just own it. Because they are my toughest critics, if I can get them on my side and believing I can play more grown up roles, then I know I can get America on my side and once we got on set, what was a small role turned out to be a really awesome role. [Laughs]

Trejo: She owned it. And I think Robert made her a star in Spy Kids, but it’s also a curse. I see her as 11 years old! Little Carmen. Little Carmen. And I remember the first time she showed me that outfit, it was like seeing your daughter in a bikini! Ahhhh.

Vega: [Laughs] You have to, though. But look. Robert, he lights his women incredibly well and makes them look sexy. He never puts dumb girls on there. They’re always strong and confident characters. The kind of women that keep the film moving forward. That’s what I like about it. You never feel, “Oh, here’s this hokey who’s in it just to be in it.”

So, let’s change pace a bit here. I have some rapid fire questions where I’m going to have Danny get in the mindset of Machete and I’ll have you, Alexa, think of what Machete would do in these scenarios. Then we’ll have Machete give his own answer. Sound good?

Vega: Uh, I think. I think, no. Machete is, of course, capable of driving stick, but I feel like you’re more of an automatic and go!

Do you agree with that?

Trejo: I have an automatic. All right. Is he a scrambled eggs or over easy guy?

Vega: Machete’s not particular. Just give him his eggs!

Does Machete use turn signals?

Vega: I think Machete does.

Vega: You wouldn’t want to hurt anybody.

Trejo: I’ve got some vintage cars, and I always put turn signals on them. Cars that didn’t even have turn signals. I’ve got a ’36 Dodge.

Trejo: Yeah, it’s beautiful. And it didn’t have turn signals on it.

So, does Machete like his coffee black or with cream?

Vega: I think Machete’s actually a sweet dude. Even though everybody’s probably like, “Oh, straight up black!” I think some cream. A little cream?

Trejo: [Laughs] French vanilla. I hate to admit that.

Trejo: You don’t even have to put sweetener in it. French vanilla is so good.

There we go! So, does Machete double knot his shoes or does he live life on the wild side and just single knot them?

I’m a double knotter as well.

There we go. Living life on the wild side!