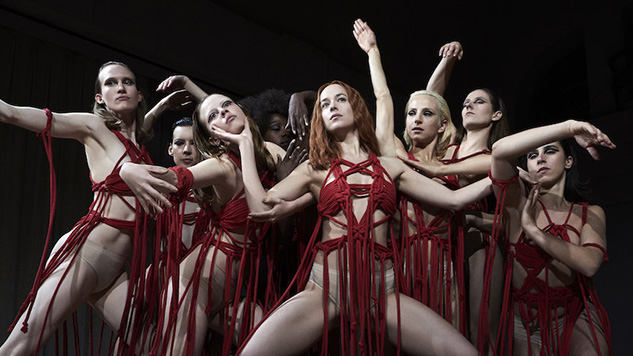 Few images might conjure as much terror and dread as seeing two Baptist church elders entering your home in the middle of the night. It’s precisely what Jared Eamons (Lucas Hedges) sees shortly after coming out as gay to his mother Nancy (Nicole Kidman) and his pastor father Marshall (Russell Crowe). Making his way to the kitchen table where the adults have been discussing how to solve this new evil, the young man is asked a crucial question: is he willing to aid in his own salvation by finding a cure for his malady, or is he ready to leave home and indulge in his sinful “chosen” lifestyle? – Jose S. (full review)

If comedy is best pulled from trauma, there are few moments in one’s life more distressingly rich to mine from than middle school. Comedian-turned-director Bo Burnham, now more than a decade removed for proper reflection, depicts the specific time period with all the spot-on crippling anxiety and all-consuming awkwardness in his modest but affecting directorial debut Eighth Grade. – Jordan R. (full review) Enter the Void is a rare example of pure cinema, a transformative experience so intense that, by the end, your eyes might be bleeding. French filmmaker Gaspar Noé pushes the envelope with amazing aerial camera techniques used to create an enveloping sense of floating like a spirit in the afterlife. It also has arguably one of the greatest opening credit sequences in the history of cinema. This film is a testament to Noe’s ambition and skill, whose rebellious and unconventional attitude makes him akin to a modern-day Jean-Luc Godard. While his graphic subject matter may be a turn off for some, at its core Enter the Void is an uncanny experience that will leave you unnerved and mesmerized. – Raffi R.

What you know about the now-infamous disaster that was Fyre Festival might be limited to the viral social media posts and various news stories in the summer of 2017. Now with some perspective and access to many of those involved, American Movie director Chris Smith has delivered a riveting inside look at all the missteps that led to catastrophe and a character study of the delusional fraud at the center. What begins as a case study in how a slick marketing campaign can bring global attention turns into a can’t-look-away trainwreck expose into a brutal, horrific experience for the hundreds that attended. – Jordan R.

Jeannette: The Childhood of Joan of Arc (Bruno Dumont)

It’s easy to imagine the “old-school” Bruno Dumont Joan of Arc film; faith, martyrdom, and the landscape of the French countryside intermingling to a wrenching finale, with Bresson and Dreyer certainly paid their transcendental cinema due. Though perhaps realizing their films weren’t the be-all, end-all in terms of representing the French icon, even if Preminger, Rivette and uh, Besson, had also offered their own takes that showed a portrait beyond the trial and subsequent burning at the stake, he finally set about making it, but as a new artist. – Ethan V. (full review)

A Star is Born (Bradley Cooper)

Few scenes in the films of 2018 were as erotically charged as the one where Jackson Maine (Bradley Cooper giving the performance of his career) slowly runs his fingers down Ally’s (Lady Gaga giving us Cher-in-Moonstruck brilliance) nose as he helps her get out of drag after a show. In the same way in which Rita Hayworth reminded us that the simple removal of an opera glove could stir the loins more than the most graphic depictions of sex, debut director Cooper spends the better time of the film relying on classic Hollywood symbolism and imagery to tell us a tale we thought we already knew. At one point a character explains Jackson’s philosophy: “Music is essentially 12 notes between any octave–12 notes and the octave repeats. It’s the same story told over and over, forever. All any artist can offer this world is how they see those 12 notes. That’s it.” The way in which Cooper made us believe we were listening to those notes for the very first time felt like a miracle. – Jose S.

Luca Guadagnino does a lot of things very, very well. Indeed, it is hard to think of a working director more adept at capturing the tactile delights of stuff like touch; taste; swimming pools; seduction; fabric; desire; food; dance; rich people; Tilda Swinton; Tilda Swinton eating; Tilda Swinton dancing; Tilda Swinton swimming; and so forth and so on. One thing he does not do so well, perhaps, is horror. But that might not matter so much when it comes to Suspiria, his 1970s- and Berlin-set reimagining of Dario Argento’s justifiably adored masterwork of the same name. – Rory O. (full review)

The film begins in total silence to the point where you wonder if something went wrong with the sound. The camera pans through still trees until finding Gannon (James Badge Dale) on the ground with rifle ready to take out the deer we can assume is somewhere out of frame. It’s only when we hear the pop of guns in the distance that we realize first-time writer/director Henry Dunham has been meticulously ensuring that we process exactly what he needs us to before heading towards the solitary locale we’ll spend the rest of The Standoff at Sparrow Creek‘s short yet tense 88-minute runtime. Having Gannon visible when those blasts go off is deliberate because there must be no question that he’s the one man we can implicitly trust. – Jared M. (full review)

Not at all worthy of the outright disregard some threw around, this is a movie which, at its core, at least deserves an “A” for effort. Some years out from a first viewing, the biggest impressions left by Valhalla Rising are predominantly positive: a beautifully composed / shot aural-visual experience featuring one of the great Mads Mikkelsen’s most physically determined performances. (Consider the way he handles himself in occasional combat scenes, all delivered with crushing savagery in their formal construction.) In the occasional, odd accordance with Winding Refn’s latest title, the more questionable patches — a drug-fueled freakout (complete with attempted [?] rape) is hard to ever wipe from the memory — act more as dints on the occasional pleasures than outright occlusions. Regardless of a final reaction, can you honestly say you’ve ever seen something quite like it? – Nick N.