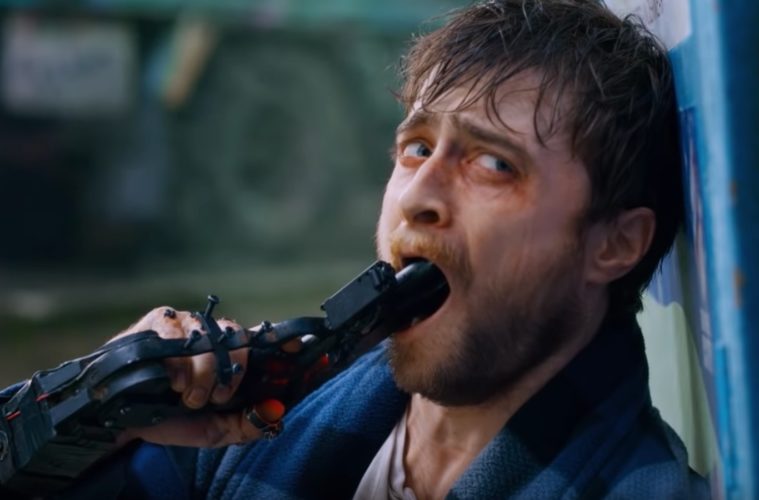 Jared Mobarak said in his TIFF review, “Just because you can troll the trolls on the internet from the comfort of your couch while wearing nothing but underwear and a bathrobe doesn’t mean you should. It’s not because it’s a waste of time, but that you probably didn’t activate your VPN and the death match website you’re commenting on now knows your address. And they don’t take kindly to anonymous nerds projecting on them the aggression they’re too afraid to unleash on their bosses. So when they break down your door, kidnap you, bolt a fifty-bullet gun to each of your hands, and tell you to kill their viral game’s highest-ranked star, you’re stuck without any pants on and no opposable thumbs to rectify the situation. Now wave to the camera—psychopaths are watching. Welcome to Shrapnel City, the site of writer-director Jason Lei Howden’s Guns Akimbo.”

Miles’ (Daniel Radcliffe) nerdy existence as a video game developer takes a dramatic turn when he inadvertently gets caught up as the next contestant with SKIZM, an underground gang live-streaming real-life death matches.  While Miles excels at running away from everything, that won’t help him outlast Nix (Samara Weaving), a killer at the top of her game.

Guns Akimbo opens on February 28 in theaters and on VOD.