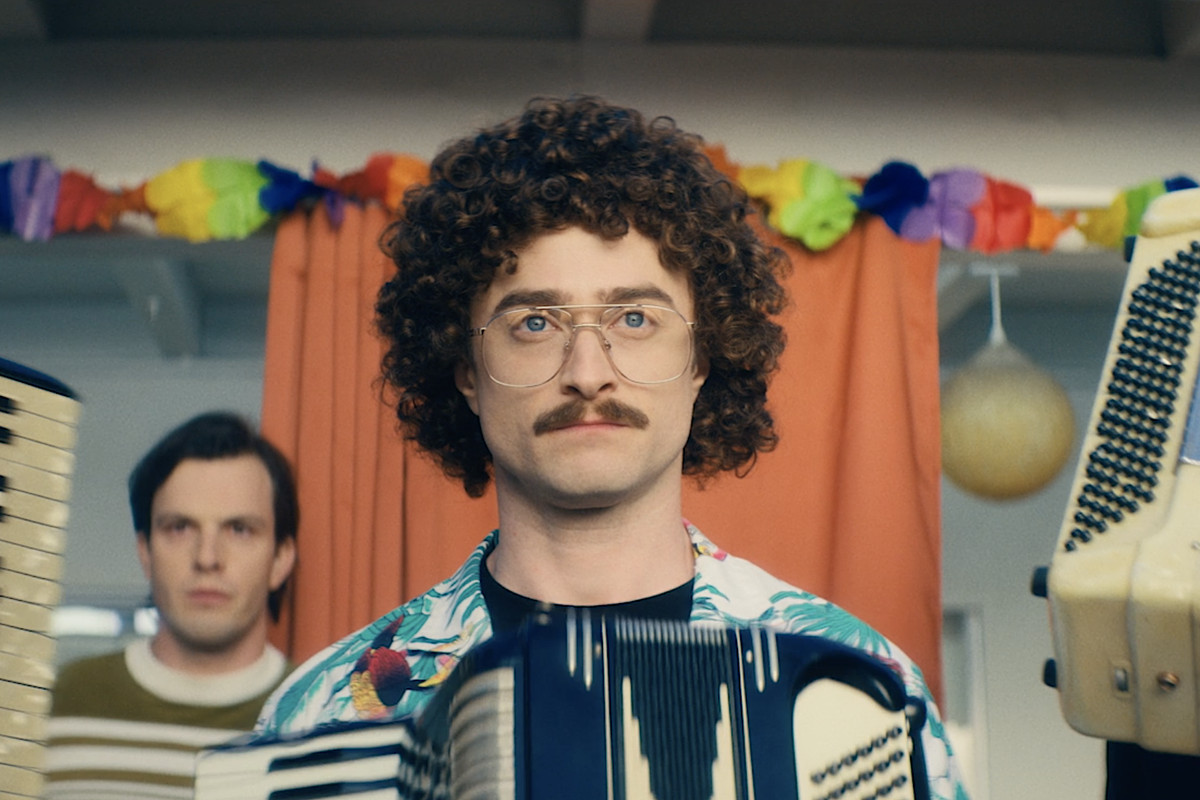 Weird: The Al Yankovic Story gets its subject in a way very few biopics ever have—by not really being a biopic at all. Rather, Weird approaches the life of song parody legend, UHF star, and self-proclaimed “world’s most famous accordion player in an extremely specific genre of music” just as Yankovic himself approaches his music: keeping the music and changing the words. Or, in this case, keeping the tropes and exaggerating them to wildly comedic effect.

It’s a style that works, mostly. Weird aims for the transcendent comedy of Popstar and Walk Hard but never quite succeeds to that degree; thus it qualifies as a modest disappointment. Undeniably funny, very well-acted, and wise in its tonal focus, Weird plays as entertainment that could have been much, much more. There is still much to admire and enjoy, not the least of which is a genuinely triumphant, note-perfect performance from Daniel Radcliffe.

The genesis of Weird: The Al Yankovic Story is director Eric Appel’s ingenious 2010 short. Extending things (with a new cast) leads to far more mixed results. Howard Stern’s Private Parts, for example, much more effectively balanced absurdity with real emotion. It is difficult to feel any real emotional investment in Weird—an intentional choice, perhaps, but not necessarily the right one. Or is it? Yankovic himself would probably blow a raspberry at the idea of “emotional investment,” and he’s not necessarily wrong.

Weird begins with young Yankovic perched under blankets, gleefully listening to the Doctor Dimento show on his transistor radio. This draws the ire of his loving mother, while pretty much everything else Al does earns the wrath of his father. Hilariously, Appel shoots scenes of Yankovic’s youthful transgressions—hidden Hawaiian shirts and polka magazines, not to mention a teenage polka party—as mortal sins. It is only when Al grows up and moves out that he can truly be himself.

At this point Yankovic is played by Radcliffe. It’s impossible to explain what a wonderful effect this has on the film. Like Robert Pattinson, the Harry Potter star has long shown a fascination with upending his onscreen persona in pursuit of strange cinematic delights (most notably in 2016’s Swiss Army Man). Radcliffe was born for a role like this, one that embraces wide-eyed sweetness and sudden bursts of outrage. Whoever had the idea of casting Radcliffe as Weird Al—I would like to think it was the ever-wise Yankovic himself—deserves major kudos.

Adult Al’s accordion skills draw little interest, but as he makes lunch for his lovably dopey roommates, inspiration strikes in the form of “My Bologna.” This sequence and several that follow are the film’s most legitimately uproarious, and in a matter of minutes Al is killing it on stage and earning the mentorship of Doctor Demento himself (a perfectly cast Rainn Wilson). Beatles-level success comes quickly for this Weird Al, along with all the trappings of musical biopic success: bling, mansions, and, of course uncertainty. Eager to take advantage and earn the “Yankovic bump”—in which a Weird Al song parody rockets the original recording to even greater success—is Madonna, played with Machiavellian, gum-smacking relish by Evan Rachel Wood.

The film’s final half-hour is by far its weakest stretch, an exceedingly over-the-top collision of a binge-drinking Weird Al, a delightfully Lady Macbeth-esque Madonna, and (somehow) Pablo Escobar’s birthday party. Here, Weird actually seems to draw influence from Yankovic’s brilliant 1989 cult classic UHF. The ending itself is a joke taken too far—funny on paper, not quite satisfying in reality.

Yet how can one truly be upset with a film that does this much so well while staying so true to its subject’s spirit? Weird, a Roku Channel original that premiered as a 2022 Toronto International Film Festival Midnight Madness selection, will undoubtedly work on the small screen, and may—like UHF—develop a cult following. If it won’t last in your memory, Weird: The Al Yankovic Story will prove enjoyable for any fan of “Eat It” or “Amish Paradise.” Yankovic is likely quite proud of it, and he deserves that feeling.

Weird: The Al Yankovic Story premiered at the Toronto International Film Festival and arrives on the Roku Channel on November 4.