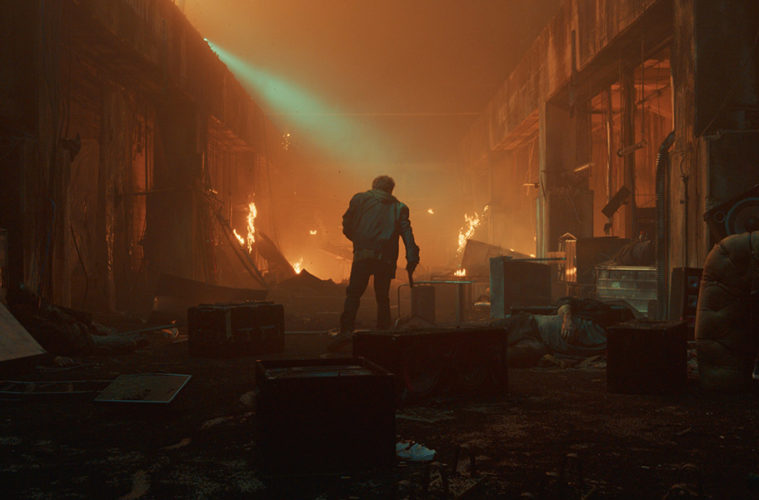 Just because you can troll the trolls on the internet from the comfort of your couch while wearing nothing but underwear and a bathrobe doesn’t mean you should. It’s not because it’s a waste of time, but that you probably didn’t activate your VPN and the death match website you’re commenting on now knows your address. And they don’t take kindly to anonymous nerds projecting on them the aggression they’re too afraid to unleash on their bosses. So when they break down your door, kidnap you, bolt a fifty-bullet gun to each of your hands, and tell you to kill their viral game’s highest-ranked star, you’re stuck without any pants on and no opposable thumbs to rectify the situation. Now wave to the camera—psychopaths are watching.

Welcome to Shrapnel City, the site of writer-director Jason Lei Howden’s Guns Akimbo. The game wreaking havoc on its streets is known as SKISM and hundreds of thousands stream it to watch the worst of the worst fight each other to the death via drone feeds and pirated CCTV broadcasts. The current champion is Nix (Samara Weaving), a recently escaped mental patient with a fear of fire and lust for artillery. Get in her crosshairs and you’ll probably be dead within minutes. So why wouldn’t SKISM leader Richter (Ned Dennehy) use that reputation as a means of cleaning the trash that is an unassuming coder named Miles (Daniel Radcliffe) whose anti-violence and veganism make him seem a lame duck contestant? Swift death or surprise upset, people will watch.

The thing, though, is it’s a lot harder to take out a moving target than one who’s trying to get you too. Nix is successful because she’s quicker on the trigger and more ruthless than anyone she’s faced. So if Miles runs away every time she comes near, her effort level increases exponentially. Because she still obviously has the upper hand regardless (having hands at all helps), Miles must recruit the services of others whether that be ex-girlfriend Nova (Natasha Liu Bordizzo), a co-worker, or a homeless man outside the clothes-bin he uses to hide (Rhys Darby). The police aren’t at his disposal since he can’t put the guns down and Nix is generally of the shoot first/not care variety as far as attempting to organize a ceasefire.

Miles remaining alive eventually irks Richter enough to kidnap people from his life as an incentive to finally get this pacifist in the game. It’s not like people aren’t watching anyway, though. When word gets out that the current player is a guy who shoots a cop and turns him over to apply pressure to the wound, viewers become compelled to flock to their screens for something SKISM has never delivered before. Some call for his swift death so the regularly scheduled carnage can return while others find Miles endearing enough to actually root for his success. So it’s a win-win-win when Nova becomes a hostage to the game. Richter accelerates the end, the bloodthirsty fiends receive an angry Miles, and those pulling for his underdog are given hope.

And we in turn enjoy a wild ride at break-neck speed thanks to Howden’s refusal to let off the gas. With an unhinged Weaving chewing the scenery as Nix and a perfectly cast Radcliffe doing his best to survive while also finding it impossible to keep Miles’ snarky thoughts in his brain out of his mouth, it’s hard not to be entertained. Guns Akimbo possesses Crank‘s adrenaline rush of action and mayhem, but with Dante from Clerks at its center instead of a tough guy bashing heads. He’s not supposed to be here and doesn’t want to cause trouble, but he’ll still throw ample shade as soon as you turn your back. Maybe forcing him to become in real life what he is online is a just punishment.

While that commentary on anonymous social media commenters is present, it’s a very small piece of the whole. Besides getting Miles into the game, it more or less falls into the background completely so we can focus on his journey forward. We anticipate the shift to him finally letting loose, brace for a Nix backstory that’s handled with self-awareness where our disinterest in discovering who she is or where she came from is concerned, and just enjoy the insanity without much need of going deeper than the surface. I wouldn’t be surprised if Howden was intentionally giving the middle finger to people who say violent movies need depth to make their butchery meaningful since he flirts with that contextual relevance before literally shooting it in the face.

The only “message” that really sticks is the desire to take out toxic masculinity. It’s not a coincidence that the two demographics mowing down brutes are usually dismissed as being averse to savage cruelty. Part of the fun is therefore watching soon-to-be victims laugh at the person that’s about to send them to hell. Nix’s weaponry and manic attitude grow exponentially more lethal (Weaving has really embraced this subject matter with Mayhem and Ready or Not already under her belt) while Miles realizes upon killing his first person that he’s a killer whether he keeps going or not. Just because he does plunge into the dark side, however, doesn’t mean he’s suddenly a badass. Credit Howden and Radcliffe for ensuring Miles never ceases to be inept.

Guns Akimbo premiered at the Toronto International Film Festival and opens on February 28.