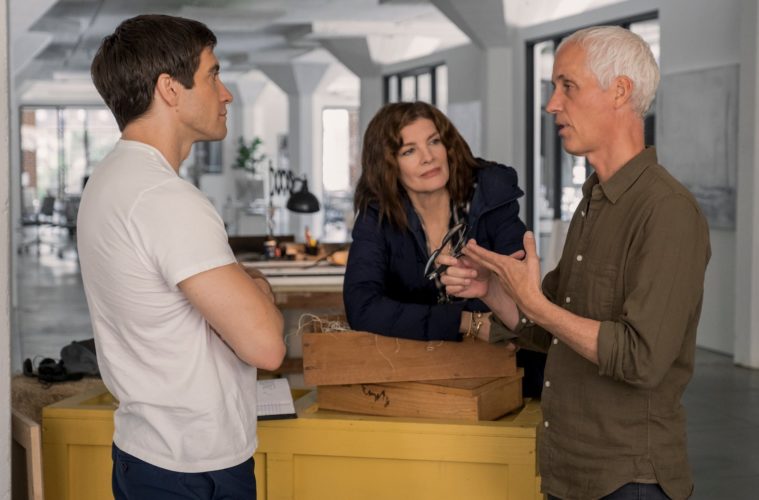 Dan Gilroy on ‘Velvet Buzzsaw’ as Pop Art, Why He Teamed with Netflix, Superheroes, and ‘The Square’

Dan Gilroy’s art world satire Velvet Buzzsaw follows pretentious Angelenos as they exploit the work of deceased artist Vetril Dease. Dease intended to destroy his work, but when neighbor Josephina (Zawe Ashton), assistant to curator Rhodora (Rene Russo), steals the art, unseen evils within the paintings are unleashed on everyone who profits from his work, including art critic Morf (Jake Gyllenhaal).

Gilroy talked to us at Sundance Film Festival about artists placing themselves in their work, the personal vs. market value of art, Hoboman’s fallen superhero backstory, and the surprising conclusion of Morf’s story.

The Film Stage: Will you talk about Vetril Dease as a character and the idea of an artist investing their spirit into their work?

Dan Gilroy: In our film, Dease is an artist who is using his art not for public consumption but to work through his childhood demons. He never wanted his art to be shown–he wanted it to be destroyed. I took that extreme position for that character to show that, on some fundamental level, artists invest their soul into their work and art is not a commodity–it’s something apart from money. And I wanted to explore that from someone who literally did not want their work to be shown.

Did you base Dease’s work on a certain kind of art?

There was no movement that we based his art on. I can tell you that the movie is based on a movement of pop art, of taking iconography from modern culture and mashing it together to challenge traditional perceptions of things. So I see the film as a sort of pop art.

Do you think working on this project with Netflix and not competing with movies in theaters, but still being available to a wide audience, helps with the over monetization of your art?

I don’t look at it as over monetization. I look at Netflix as a platform that, thank God exists, that is making varied content. The studios are drifting towards branded IP, so the decision for a filmmaker like me is a decision that a lot of other filmmakers are making right now. Like Roma, the studios are not going to pay for a black-and-white film in Spanish. So for me, Netflix represents somebody who is willing to make a project that is not traditional and show it to a lot of people. That’s the biggest plus for me, that they are willing to make the film and distribute it in a very efficient way.

In movies, we really don’t see much of a genuine Los Angeles. Velvet Buzzsaw’s coverage of L.A. showed touchstones of the city that felt encompassing.

It’s definitely intentional. And the reason you don’t see it because most people come to L.A. and shoot two days of exterior and say, “Here, it’s an LA film.” I shot Nightcrawler here, I shot Roman J. Israel, Esq. here and I shot Velvet Buzzsaw here. L.A. is very much a character in all these films. There’s an uncivilized, raw quality to Los Angeles that permeates the aesthetic of the film.

Why did you torture Coco (Natalia Dyer)? This poor assistant, finding everyone’s bodies.

You know, Coco’s character is not utterly pure. Coco was sort of always there ratting people out, telling people secrets she knew. I think she got off lucky, finding all of the bodies and not becoming one of them.

Jake Gyllenhaal’s character Morf goes on a journey to discover Dease’s background. Based on what he finds, Morf decides to stop exploiting Dease’s work. Yet he still dies. Why does he meet the same fate as everyone else?

Because under the rules I created, Dease was going to take retribution on anyone profiting from the art, and it wasn’t going to be a system where you were found innocent by seeing the error of your ways. It’s sort of like in The Ring: if you see the video on TV, there’s no reversing it.

Will you talk about Hoboman and Mark Steiger’s performance?

We auditioned a lot of people before we brought Mark in, and Mark started to show us what he could do as a robot and he’s very bendable. He’s a very talented, physical performer.

Were you using CG to hide him in the costume?

Any place where you can see inside the robot, those we green screen pieces of cloths which got CG’d up.

Hoboman is an out-of-work superhero, is that right?

Yes, he’s an out of work superhero that works part-time and is now begging for money. It was just a visually interesting concept with his old red white and blue speedo and his cape.

Where did you get the idea of Hoboman as a character and not just as a piece of art?

I like to think there are similarities between the film business and the contemporary art business, and one of the ways I thought I could bridge it was with a character like Hoboman because our industry is very much dominated by superheroes. So bringing in a superhero character allowed me to establish some thematic parallels, and I was interested in the idea of a fallen superhero as backstory for Hoboman. That he once was a great superhero, and I don’t know if it comes through or not, but there are tire marks on his chest that we imaged that he had been in a fight and that he had been crippled and injured and fallen on hard times. I just thought it was an interesting piece of contemporary art of a superhero that has hit hard times and is now panhandling.

My last question is about the film The Square, which won the Palme d’Or…

I love the movie, by the way.

You’re both in a similar realm of satire.

We were well into production–we might have been into shooting by the time it came out–but I just loved the film. I loved the idea of it. It doesn’t connect the dots in any traditional way. It invites you in to finish the character ideas and connect the story. I think it’s a film that by under telling the story allows the audience to really come in and immerse themselves in the story.

Velvet Buzzsaw premiered at the Sundance Film Festival and is now on Netflix.