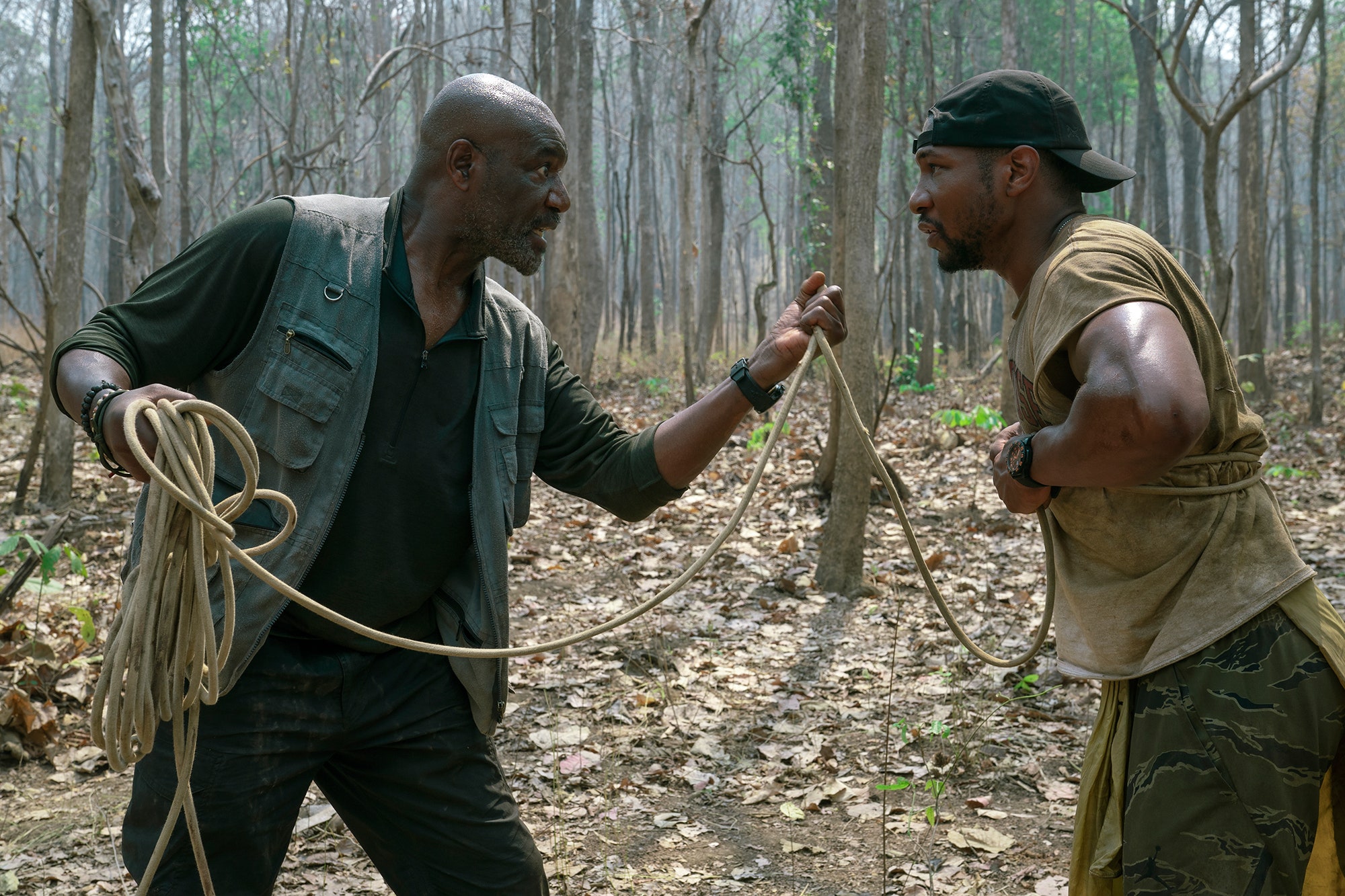 A timely but confusing mess of styles, tones, and subject matter, Spike Lee’s Da 5 Bloods zigzags between the director’s trademark topical diatribes on race and politics––this time grappling with the legacy of the Vietnam War–and a hard-R B-movie caper about old soldiers on a trek for lost gold and lost glory. The journey follows members of an all-black squad of Vietnam veterans (Delroy Lindo, Clarke Peters, Norm Lewis, and Isaiah Whitlock Jr.) who return to the site of their greatest battle in the present day both to confront their respective demons and to recover a lost cache of CIA gold buried since 1968. They have another mission, as well: to recover the remains of their beloved, martyred squad leader and reluctant warrior, “Stormin’ Norman.” Portraying Norman all too briefly in flashbacks and dreams, Chadwick Boseman steals the show with a performance of simmering, understated masculinity, black self-ownership, and righteous fury that recalls the film’s opening archival footage of the late Muhammad Ali (and in case the comparison wasn’t obvious, Peters’s character eagerly spells it out for us in voiceover).

In the present-day plotline, however, the star of the show is Lindo’s Paul, a snarling and haunted contradiction: a MAGA-hat-wearing, PTSD-warped vet who enjoys a less than strictly supportive relationship with his buff yet mild-mannered tagalong son, David (a doe-eyed Jonathan Majors). Paul, whose politics are never fully elucidated beyond a general sense of resentment against the world, functions as both a magnet for Trump-related cracks, a focal point for sometimes confounding melodrama (what leads his companions to conclude that this clearly unstable, paranoid man should be the only one among them entrusted with a firearm?) and, later in the film, impassioned quasi-poetic rants to the camera about the inchoate rage and hurt resulting from his wartime trauma. Other characters get hastily sketched subplots (Peters has a criminally-compromised old Hanoi flame and bastard child, Majors has a leggy French love interest, Whitlock gets to utter the extended four-letter word he is most famous for, and Lewis is… there) but the two angriest of the 5 Bloods–past and present, dead and living, left and right–are clearly where Lee sees the heart and soul of the picture.

This seems like the safest assumption at least, because in truth the film is so overstuffed and eclectic it can prove baffling to read. Lee’s characteristic semi-improvised scenes of politically pertinent banter and striking archival materials share screentime with a caper, one ripe with dime-store clichés that pits the aging treasure hunters against gun-toting gangsters and their own egos. In the film’s staggering 2.5 hours, the dartboard mashup of tangentially related ingredients never fully coheres. In Do the Right Thing, Lee’s opus, his fondness for these rambling topical diatribes found its perfect sense of purpose in a looser, vignette-based narrative structure, a rebuke to standard plot-driven Hollywood, which evoked the thriving social ecosystem of a single neighborhood–its spaces and characters and passage of time. In his more recent hit BlacKkKlansman (whose co-writer, Kevin Willmott, helped Lee develop 5 Bloods from an existing script), a fusion of politics and pulp proved an effective means of manipulating audience expectations, alternatively guiding them towards levity or seriousness only to pull the rug out from under them with a jolt in the opposite direction.

In Da 5 Bloods, as in many of Lee’s lesser works, the patchwork recipe of plot and didacticism seems less purposeful, throwing a different narrative or aesthetic dart in every scene (sometimes multiple times per scene) and seeing what hits, if anything. A handful of generic war flashbacks and Die Hard-esque shootouts illustrate why Lee is not an action filmmaker. Documentary becomes comedy becomes swashbuckling adventure becomes white-knuckle thriller, and the shifts happen so quickly and unceremoniously that just deciphering the film’s tone can be a puzzle. A major character’s misfortune recalls a comical death scene from Tropic Thunder; is Lee anticipating laughter? The characters’ behavior before and after suggests not, but before we can dwell on it the narrative has swerved into another setup of scene and conflict, and then another.

Audiences stuck at home and eager for a moment of cinematic clarity in these times of renewed racial tension and anguish may come flocking to the film’s streaming debut–Netflix is certainly counting on it, filing the film under the newly rolled-out “Black Lives Matter” content banner on its home screen. They may find brief flashes of what they’re looking for too, in Lee’s tightly-edited agitprop storms of historical footage, and in talk between its conscience-questioning protagonists of an (ostensibly 1960s) America that is “at war with black people.” But the good material is diluted across this confused, scattershot project, making a sit through that bulky runtime a lot to ask when one could be much better served by watching Do the Right Thing or Malcolm X again.