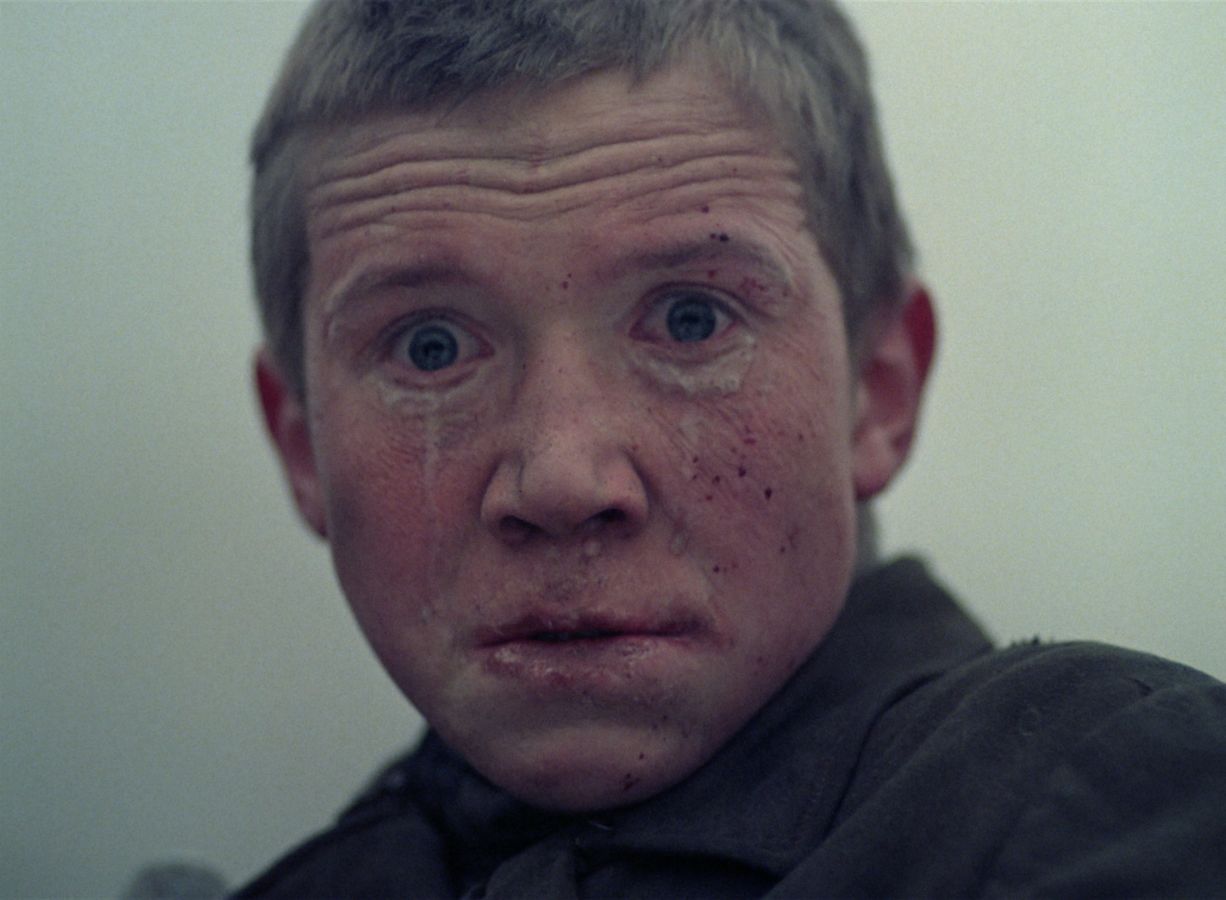 A stark contrast from triumphalist Allied narratives of World War II, Elem Klimov’s spellbinding Belarus-set masterpiece Come and See–now playing in a beautiful new restoration from Janus Films–tells a harrowing story of the Eastern Front from the perspective of those for whom victory against the Nazis came at far too steep a price.

Based on Ales Adamovich’s painstakingly researched historical novel I Am from the Fiery Village (the author also co-wrote the screenplay with Klimov), Come and See follows Flyora (Aleksei Kravchenko), a young boy from rural Belarus seeking to enlist with the Soviet Partisans, eager for martial glory even as he ignores warnings of impending doom. Once war breaks out, Flyora’s reality begins to warp and fold in on itself as he bears harrowing witness to the Nazis’ war crimes and the existential horror of total war.

Klimov’s technique, and thus the film’s sense and layering of realities, is intentionally chameleonic, shifting back and forth between cold-eyed realist war memoir and surreal impressionist nightmare–a reverie in which dreams, myths and visions meld seamlessly into the dispassionate facts of history and the conscious artifice of the cinema. In these mesmerizing stretches ambient sound surges and plummets; characters gaze eerily into the camera with shimmering ghostly eyes, uttering anguished cries and otherworldly portents. While not invoked by name, the spirits and customs of East European folklore hang heavy over the film–in sets, in incidental dialogue, in the persistent presence of animals as symbols and messengers. Like Terrence Malick, Klimov presents the natural world and folk culture as a space of prime and savage spiritual order, a transcendental flow violently interrupted by the intrusion of the twentieth century’s industrial war machine with its industrial secular ideologies, a shapeless but terrible behemoth which permits no spirit, faith or love to exist in its wake. A visual highlight of the film is a traditional mud scarecrow fashioned in the mocking visage of Hitler–a telling symbol of the clash between folk culture and violent modernity.

Though set during World War II, Come and See’s original 1985 release (waylaid for years by Soviet censors) saw it unveiled in an era and respective national mood closer to Apocalypse Now–a similarly inward-looking classic from the other side of the Iron Curtain, one also preoccupied with repainting a disastrous modern war in the timeless symbology of madness and myth. (Though it was intended to commemorate the 40th anniversary of Soviet victory over the Nazis, Klimov’s film ended up releasing near the exact middle of the USSR’s catastrophic campaign in Afghanistan.) In its helpless perspective and hellish tone, it is less a war film than a Holocaust film. Klimov draws a line with brutal clarity between the pseudo-organized “men’s world” of war and the senseless chaos of the “war” experienced by women, children, and the elderly, who suffer most horribly at the hands of the Nazis. In a likely sigh of relief for Soviet censors, though, the Partisan army escapes the film’s revulsion relatively unscathed, a scrappy band of manly men whose conventional heroism ultimately stands fast against the demonic Nazis’ war of aggression. It’s a contrast with Agnieszka Holland’s Europa Europa, also concerning a teenage refugee’s experience of the war, whose Jewish-German protagonist finds himself menaced and brutalized among both of Eastern Europe’s dueling authoritarian superpowers. Klimov’s hatred of the war does not preclude patriotism to the Soviet hegemon, while Holland attacks both imperialist forces as oppressive institutions quashing conquered subjects.

Among cinema’s literati, Come and See occupies a reputation for rough viewing almost on par with Pier Pasolini’s similarly anti-fascist Salo. Impassioned declarations and social media memes abound alleging the sheer test of will that is sitting through Klimov’s 142-minute film. But coasting on that kind of hype, one might be surprised to discover that the film contains relatively little in the way of actual graphic imagery, at least compared to the likes of Pasolini’s guts-out assault on the eyeballs. Come and See’s copious amounts of atrocity and death by and large occur offscreen; most of its devastating impact is derived from its oppressive interiority, the power of suggestion, the intimate psychic distance from its characters illustrated in the wealth of extreme close-up profiles (The Passion of Joan of Arc is its practical blueprint for relentless facial anguish). It would be a hard sell to claim the film is more psychologically taxing to watch than the likes of Claude Lanzmann’s Shoah: can any actor or cinematic spectacle ever hope to challenge the sheer empathetic agony of seeing a real survivor’s haunted eyes, hearing the crack and warble in their voice as they describe the frank truth of what they witnessed?

Yet even as Come and See maintains some civilized distance from the most stomach-churning sights of war, Klimov’s emphasis on reaction over action serves an effective end within his own thematic framework. As Flyora’s trauma mounts over the course of the film–as more and more dead bodies and random acts of destruction are paraded before him and us–the stress eventually robs him of not merely his innocence but his physical youth. In a remarkable feat of makeup artistry, his young face grays and wrinkles over the film’s running time, entering with a red-cheeked grin and exiting as a gnarled, shrunken husk. In the pandemonium of war, the boundary between mental and physical violence grows ever more ill-defined; we forget who has been brutalized by physical torture, and who simply by despair. This, of course, is the point.

The restoration of Come and See is now available on The Criterion Collection.