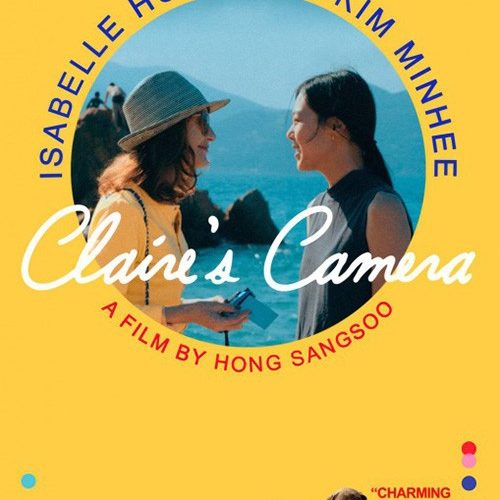 Hong Sang-soo’s first film starring Isabelle Huppert, In Another Country, counts as one of the more lightweight entries in the Korean auteur’s oeuvre. Compare it to Claire’s Camera, their second collaboration, and it suddenly looks like Inland Empire. That’s not to say Claire’s Camera is bad or unenjoyable. It has plenty of the charm characteristic of Hong’s cinema, and there are far worse ways to spend 69 minutes than in the company of his characters as they amble through sunny Cannes idly chatting about love and life, disappointment and fulfillment. At the same time, knowing the director is capable of achieving so much more with even less – one of his greatest films, Hill of Freedom, is similarly scaled and two minutes shorter – it’s difficult not to end up frustrated by what feels like a rushed and ultimately undercooked work.

That’s no doubt due to the fact that the film was shot last year during the Cannes Film Festival, when its two leads, Huppert and Kim Min-hee, were in town for Paul Verhoeven’s Elle and Park Chan-wook’s The Handmaiden, respectively. Considering the insane schedules of screenings, interviews, photo calls, parties, etc. they must have had as the stars of films competing for the Palme d’Or — never mind that Cannes was overrun with visitors — the production of Claire’s Camera was clearly a veritable guerilla operation. With that said, none of the bustle and stress of the festival seeped into the film, which is a decidedly laid-back affair, about as pleasurable as a sojourn on the French Riviera ought to be.

That’s the case for the viewer, less so for the protagonist, Manhee (Kim), a sales agent who is fired from her job in one of the film’s first scenes. In a typically Hongian dialogue, Manhee and her boss, Nam (Chang Mi-hee), are sitting at a table in a café. After telling Manhee that she’s goodhearted yet dishonest, Nam unceremoniously fires her, offering no explanation as to her supposed dishonesty. The reason is given in the next scene, when it’s revealed that Nam is in a relationship with So (Jung Jin-young), a film director who recently had a drunken fling with Manhee. Considering the real-life public scandal of Hong’s affair with Kim, the repercussions of which were already explored in their previous collaboration, On the Beach at Night Alone, and the fact that Jung bears a striking resemblance to Hong, it’s fair to assume Claire’s Camera represents another instance of introspection-via-cinema on the part of the director.

“The only way to change things is to look at something very slowly,” offers Huppert’s character Claire, referring to the pictures she keeps snapping with her instant camera. A visitor to the festival, Claire randomly bumps into each of the characters and ends up spending time with them, catalyzing a contemplation of their emotional misfortunes through her receptive presence. Unsurprisingly, So reveals himself to be a cowardly and self-regarding asshole whose lack of character is held in contrast to Manhee’s fortitude, though the film remains skeptical about whether happiness can be derived from a moral victory.

These considerations, however, don’t weigh too heavily on Claire’s Camera, a film content with suggesting themes rather than thoroughly exploring them. Its appeal lies more in the seductive energy exuded from the dialogues and performances, which feel improvised. Huppert and Kim are clearly having fun riffing off one another, each speaking in lightly broken English and conveying the pleasures of ephemeral encounters in low-stakes liminal spaces, such as the one represented by the festival. Claire’s Camera as a whole is just as fleeting, and while it too may not leave a lasting mark, it’s nonetheless a welcome diversion while we wait for the next film by the exceptionally prolific Hong, which is inevitably around the corner – at this year’s Cannes festival, it literally premiered the very next day.

Claire’s Camera premiered at the Cannes Film Festival and opens on March 9. See our coverage below.