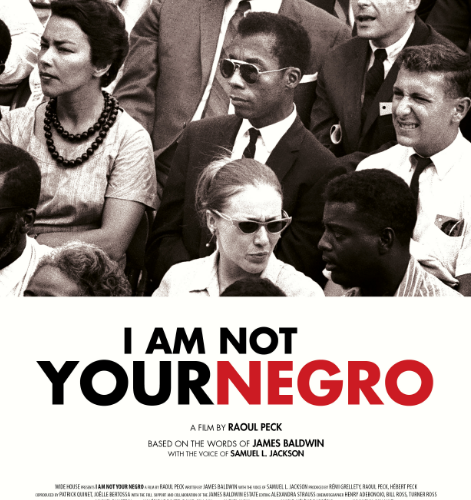 [CIFF Review] I Am Not Your Negro

In 2016, I Am Not Your Negro is perhaps destined to be tethered to other recent pieces of racially charged social advocacy, 13th and OJ: Made In America, but Raoul Peck’s film is less about outlining a history of disproportion than a persistent state of being. It’s a conversation between James Baldwin’s unfinished work, Remember This House, and the modern national horror, but the evidence here is more intrinsically spiritual than fact-based, and, in the process, Peck has made one of this year’s finest documentaries. At once pulsing with anger and yearning for compassion, it’s an examination of past and present America as a cycle where the backdrop has changed and particulars have remained the same.

I Am Not Your Negro‘s background further adds to the holiness around the text, as Baldwin was only able to write thirty pages of his last book: a personal invocation that tied together the deaths of disparate civil rights icons, Martin Luther King Jr., Malcolm X, and Medgar Evars, and the ways they “banged against each other, and reveal each other.” This last detail is key, for it’s a small understanding of how the film can become both a freewheeling examination of personal surrender and remain a cogent thesis that threads in the equally frayed perception of modern blackness. It’s a view of how racial pride became something in spite of rather than because, and how outside perception only reiterated a sense of national inferiority.

In its evocations as an exercise of deep cleansing, I Am Not Your Negro approximates something of an unsuccessful exorcism as Peck ties Samuel L. Jackson’s narration of black erasure to the ongoing contexts of not only Ferguson, but also in the hollow self-congratulation of putting a black president in office as a final panacea. Baldwin’s writing is fully the engine for the film, but Peck and editor Alexandra Strauss’ construction is tantamount to its success, as they match Baldwin’s individual insights to a more universal image without losing the specificity of his words.

Peck had extensive access to archival interview footage of Baldwin on shows like Dick Cavett, where the author is forced to act bemused as he’s questioned about the linguistic importance of “negro,” or argue with loudmouth Ivy league types who deny that race can ever truly be an essential factor in one’s well-being. And these interviews balance perfectly with Jackson’s narration, to the point where they nearly blur together with his firm, unhurried words.

Baldwin’s incendiary writing is powerful enough on its own as he speaks about decades of fantasy taking precedence over reality in white people’s ignorance of racial issues and his own fears of returning to America after taking refuge in France, but Peck doesn’t shy away from the possibility to connect Baldwin’s more general feelings with direct murders of emblematic figures such as Trayvon Martin, Tamir Rice, and Mike Brown.

But even these descriptions of chronological freedom do a disservice to the tightness of the overall vision. Every tangent connects to a larger thesis of how different spheres reassert a white hierarchy, not the least being a history of cinema. Baldwin traces early cinema’s view of race as shame. Referring to John Ford’s Stagecoach, Baldwin speaks early on about the sensation of discovering that the film’s Indians were him.

Peck’s direction places that quality of the “other” at the forefront of his own interests, forgoing the usual contextual exposition with King or Malcolm X to instead focus on moments like Baldwin seeing the casket and how that rearranged his own personal expectations about the possibilities of his life. And while the film sometimes verges on formal stasis, Baldwin’s prose and the mounting power of the imagery nearly always bring it back to a place of focus.

By the very virtue of its origins and subject matter, I Am Not A Negro needs to leave on a place of unresolved tension. With Baldwin’s final words about white illusion, the sound mix gives way to Kendrick Lamar, a modern artist who’s offered his own meditations on the conflicted reactions to his skin color. It’s a neat, if ideal passing of the torch, but also a moment that epitomizes that this story still has many chapters to go.

I Am Not Your Negro screened at the Chicago International Film Festival and opens on February 3, 2017.