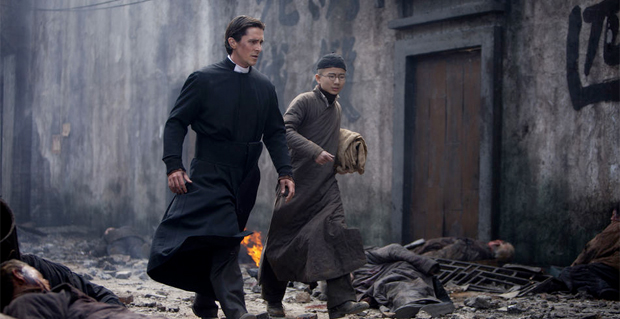 Before he began production on The Dark Knight Rises, Christian Bale was on the set of the next film from Hero and House of Flying Daggers director Yimou Zhang. The Flowers of War holds the title of the most expensive movie ever made in China, costing $94 million. The film, which is China’s Foreign Oscar contender, features Bale as an American priest named John, who takes refuge in a church with 13 prostitutes and a group of innocent schoolgirls during the fighting between Chinese and Japanese troops in 1937.

A reader sent us the first international trailer, which can be seen below, and also reveals that Paul Schneider has a role in the film. The action looks massive, but this promotional piece is a bit scattered and repetitive. I’m looking forward to an official US trailer, but this will do for now as our first look at footage. In 1937, Nanjing stands at the forefront of a war between China and Japan. Inspired by true life events, and starring Christian Bale as an American trapped in the middle of battle, The Flowers of War follows the epic journey of John (Bale) and 13 courtesans as they seek refuge in a church compound together with a group of innocent schoolgirls from the church.

Struggling to survive the violence and persecution brought on by the ruthless Japanese army, an act of heroism leads the group to fight back and risk their lives for the sake of everyone. Through treacherous surroundings and facing unimaginable evil, The Flowers of War manages to tell a genuine story of hope, love and sacrifice. With nowhere to run and nowhere to hide, fate always has a way of bringing the most unlikely heroes together. Starring Academy Award winner Christian Bale (The Fighter), The Flowers of War is written and directed by Yimou Zhang (Hero, House of Flying Daggers).

The Flowers of War is expected to open around Christmas in the US.