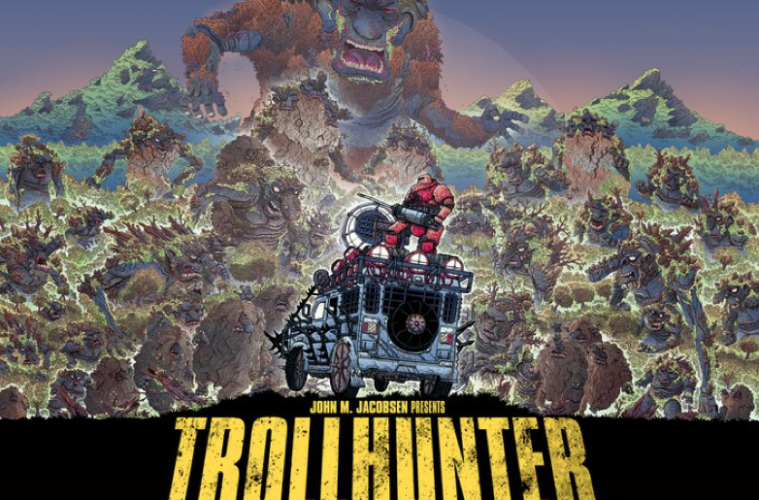 Back in April, André Øvredal, the writer/director of the Norwegian action-adventure Troll Hunter, revealed he was in negotiations with American director/producer Chris Columbus to give the quirky monster flick the American remake treatment. Well, now Deadline has announced the contracts have been signed and the rape remake of Troll Hunter is a go. Columbus will produce the film under his 1942 Pictures’ banner, and has hired Marc Haimes, a former Dreamworks exec-turned-screenwriter, to pen the script.

“Troll Hunter was a visceral, thrilling, cinematic rock and roller coaster ride of a movie. Visually, there are scenes in this film that American audiences have never seen. We want to introduce an international audience to this amazing moviegoing experience.”

Actually, I totally agree with Columbus, here. Troll Hunter (which is currently on VOD and opens in theaters this weekend in New York and will expand in coming weeks) is a fresh take on the monster movie, blending its conventions with that of the found footage and mockumentary subgenres to create something rollicking, hilarious and fun. That’s why I advise you all to go see it. [Read my review here.] Where Columbus and I differ is that I think he should use his influence to garner the film a wider U.S. release and help it find an international audience instead of mining it for action sequences to make a lifeless American retread. Sure, there was a time when Columbus made fun movies full of heart and thrills. After all, his directorial debut was Adventures in Babysitting! Then came Home Alone and Home Alone 2: Lost in New York, all movies I adored and watched countless times as a kid. And did you know he wrote The Goonies? So yes, Columbus has shown a talent for crafting fun adventures. But that was long ago. His more recent efforts run the gamut from forgettable (Bicentennial Man) to unwatchable (Rent). Plus, his Harry Potters were by far the worst of the franchise. And please do note that most of these films are targeted at kids. Though Troll Hunter is rated PG-13, it isn’t exactly a kid’s movie.

This Norwegian gem centers on a smug trio of college students, shooting a documentary on Norway’s apparent bear problem. But these cynical co-eds are reintroduced to childhood wonder after witnessing an elusive poacher do battle with a towering troll! Beyond some gore and adult themes, Troll Hunter has a dark yet cheeky tone and sharp sense of humor that I’ve repeatedly compared to Christopher Guest’s movies. All elements I fear Columbus will expunge in favor of mimicking a myriad of American family films like Goonies, E.T., or even Super 8. In fact, this mutation seems a guarantee considering “screenwriter” Haiman’s only writing credit to date is Paramount’s in development Jitters, which THR calls ” a creepy family film in the early-’80s Amblin mold (think Gremlins).”

Now, I’m not saying the kid-focused Amblin/Spielberg films aren’t amazing or tons of fun. Of course they are. They just have little in common with Troll Hunter. I previously pondered how the film’s story would be changed to be fitted for American audience, and to be honest – the whole thing depresses me. It’s not that Troll Hunter is some perfect film that should be deemed sacred; it’s just that I am sick of Hollywood transforming truly compelling foreign cinema into some slapdash rehash with the promise of sharing “the story” with a wider audience. Such recent remakes from Scandinavian cinema include Let Me In, the pale imitation of Let the Right One In, and David Fincher’s upcoming version of The Girl With the Dragon Tattoo, which if the trailer is any indication, will be borrowing heavily from the Swedish original.

Sometimes remakes are a fun reinvention of a story that doesn’t detract from the source material, and may in fact encourage people to seek it out — The Departed for instance. But most of the time, American-made remakes slap on some stars, rush through production and the result is a dull and/or dumbed down effort that may vaguely resemble its inspired source material, but manages to miss out on what made it exceptional. To that end, Troll Hunter is a deeply entertaining and original film that I urge you to see before Chris Columbus’ remake barges into theaters — on its way to Wal-Mart’s bargain bin. What do you think of this proposed remake? What’s the worst remake you’ve seen? What’s the best? Sound off in comments.