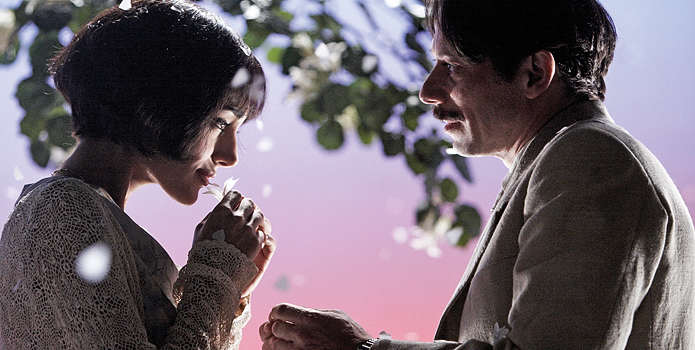 ‘Chicken With Plums’ US Trailer – ‘Persepolis’ Filmmakers Venture Into Live-Action Nominated for the Best Animated Feature Oscar in 2008, Persepolis was a stunning black-and-white film that proved this style can be used to convey stark emotion and mature storytelling. Filmmakers Marjane Satrapi and Vincent Paronnaud are back after an extended break with their follow-up, Chicken With Plums. Primarily live-action, the film starring Mathieu Amalric, also includes bits of animation and is heavy on magical realism.

After premiering at Toronto International Film Festival last year – where we called it one of our favorites – it will arrive in theaters later this summer and we’ve got the first trailer.  Check it out below and read our full review from TIFF where we said Amalric  “conveys deep emotion here with his wide, piercing eyes; a man whose truly sorrow may have been different if he was able to find true love. If Satrapi and Paronnaud continue the lengthy, detailed process of blending fantasy animation with live-action on their next feature, it may be awhile before we see it. Cherish Chicken with Plums, as it is one of the most stimulating, visionary films of the year.”

Nasser-Ali, a talented musician, loses the will to live after his wife breaks his beloved violin during an argument. He searches for a replacement, and finding none that sounds quite the same, he vows to die. Eight days later, he does. This is the story of his last week of life, where we see flashbacks and flash forwards of his previous life and his children’s futures. We also see appearances of a nude Sophia Loren as well as the angel of death, Azarel. As we see his life, we realize exactly why he chose to end it and the profundity of this choice.

Chicken With Plums arrives in limited release on August 17th.