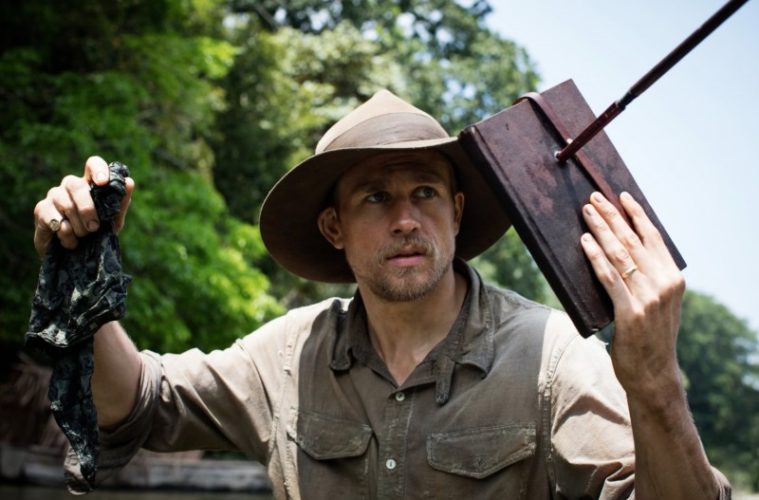 Charlie Hunnam on the Heroism of Percy Fawcett, the End of Days, and ‘The Lost City of Z’

There was a time when Hollywood specialized in big films with big ideas, epics that not only transported audiences to previously unseen worlds, but also had something important to say about the human condition. If that tradition has all but vanished, director James Gray seems intent on rescuing it with The Lost City of Z, a grand epic about British explorer Percy Fawcett (Charlie Hunnam) and his obsession with unearthing an ancient lost city in the Amazon which he believed to be the remains of El Dorado. While Gray shows the thrill of the adventure, he’s equally interested in capturing the struggle within Fawcett who renounced a traditional family life to seek the restoration of his family name, and the creation of a new legacy for his children.

Even though he displayed his ability to convey emotional turmoil in FX’s Sons of Anarchy, the movies for the most part haven’t taken advantage of Hunnam’s abilities. This should change as he proves his leading man quality in The Lost City of Z, where he turns Fawcett into a character of many contradictions, who can go from utmost tenderness towards his wife Nina (Sienna Miller) to a complete lack of humility when he confronts the people who challenge his expedition. Hunnam makes for a commendable adventurer, but it’s his quieter moments that are the true revelation, as in scenes where he evokes pages of dialogue with a simple gesture. I spoke to Hunnam about what drew him to Fawcett, how he found reintegration into daily life a challenge after shooting in the jungle, and working with Gray.

The Film Stage: Doing your research to play Percy Fawcett what surprised you the most about him?

James Gray: I don’t know what surprised me the most. I was struck by how much sacrifice he made through his life, and the compromise he made with his family, and how the folly that all of that sacrifice in his life kept being rewarded by failure. Yet he had the tenacity to keep moving forward, he was never deterred from trying to reach his goal. I was struck by how painful his life must’ve been, and also how incredible it is to have such belief and conviction in one self. Even as everyone in society told him he was crazy he had come to believe that this very modern civilization had existed in the Amazon rainforest, and while at that time everyone believed that was impossible, he believed it so deeply he spent 35 years of his life trying to find proof of that.

What was the challenge of playing someone who was always doomed to fail in the eyes of society?

It’s funny, the great tragedy of the story of Fawcett is he actually didn’t fail. He wasn’t able to prove it in his lifetime, but since the deforestation of that area of the Amazon, and thanks to infrared photography, it’s actually been proven that the city he was looking for existed, and it was exactly where he thought it existed. The great tragedy is he was walking around that area trying to find a civilization that had become extinct, what he hadn’t anticipated was how quickly the jungle would reclaim that territory and leave no sign of that civilization. I never thought of him as a failure. I thought of him as a heroic, pioneering thinker, who was a little ahead of his time.

Your scenes with Sienna Miller were beautiful. How did the two of you work on the relationship between Percy and Nina?

I think Nina historically was such a wonderful, impressive lady, she was also ahead of her time. Working with Sienna was extraordinary — I think she’s absolutely brilliant and had really been actively seeking an opportunity to work with her. There was a film I was talking about doing that shot at the same time as The Lost City of Z, that I was attached to, and I was advocating them offering the female lead to Sienna. That film ended up not going forward, but then we did this instead. She’s effortlessly brilliant as an actor, but also an incredible person to be around, she’s incredibly smart, gregarious and a good quality of life human being.

James Gray is a great director and he’s also such a wonderful cinephile. This film made me think of things like 2001: A Space Odyssey and I wonder if he gave you any assignments or recommended films to watch in preparation for the shoot?

No, in terms of his directorial inspiration he didn’t talk about that too much. There was a narrative about 2001: A Space Odyssey because there’s one shot, the segue from a rather dramatic moment Percy has where he slaps his son into the first World War sequence, and there was a shot he borrowed directly from 2001: A Space Odyssey, but that was the only time I actually remember referencing that film, or any other film specifically. We were more engaged in making it personal and finding the emotional truth of Fawcett’s journey.

I’ve heard the stories about bugs in your ears and all the craziness that went down in the Amazon, but did you discover that coming back into urban living was strange after being in the jungle?

I gotta say I found reintegration incredibly, incredibly difficult. It’s funny, one of the things I could relate with Fawcett so deeply was this sense of trying to fill the great and terrible hole we spend our lives trying to fill, and trying to figure out what it all means. It felt to me that greater than the desire to find the lost city of Z, what Amazonia provided Fawcett was a purpose, it made his life make sense. My interpretation of it is that he felt alive and whole, and the terrible voice inside him begging for an answer and the meaning of it all was silenced when he was there.

I can really relate to that because the only time when I don’t feel completely fucking crazy is when I’m making a film. For me that’s when the world makes sense. I’m engaged in a process that feels like a worthy use of time. It’s so funny that the process of acting and the rhythm of an actor’s life, when you’re making a film your day is filled up: you’re shooting 80 hours a week, there’s also rehearsal, and it’s such a specific goal that’s fulfilling or filling every waking hour of your hopes and dreams. Then the film finishes, you come back to your daily life and there’s that gaping hole of the loss of that experience, but then also trying to reconcile what life means outside of the context of work.

Life moves on as well, you leave for three or four months and life goes on. You come back and the rest of the people in your life have also moved on, so there’s always a feeling of alienation. All of it combined makes me find the process of reintegration very difficult.

You have King Arthur: Legend of the Sword coming up in the summer, so with The Lost City of Z we’re bracing ourselves for a “Charlie Hunnam tells the History of Britain” kinda thing.

[Laughs] Just call me the Professor.

I haven’t seen King Arthur: Legend of the Sword but considering the Arthurian legend is about glory and loyalty, just like Percy’s story, do you feel that in the aftermath of Brexit these movies about the expansion of the Empire seem bittersweet? Or do you think of them as romantic reminders of what once was?

That’s an amazing question and it’s a subject I would love to talk to you for an hour about. From the way I look at life, I feel very acutely that a decade ago we arrived at this point where historically there was this wonderful force of progress and moving forward. I really don’t have that sense anymore, I don’t feel that anymore. We reached critical mass and as morbid as it is, I don’t sit around feeling depressed about it, but I can’t shake the feeling that we’re now in the end of days.

There’s really no real tangible hopeful future for us. If you look at all the things we’re facing with economic difficulty, the Ponzi scheme that the global economy has been based on, the lack of resources, water shortage, climate change, overpopulation…. I don’t know if all the challenges we’re facing are surmountable. We’ve reached the top and now we’re in a very serious period of very rapid decline. [Laughs] On those hopeful words, I gotta go. That’s a rather depressing note to the end this interview on.

Thank God for art then.

The Lost City of Z is now in limited release and expands nationwide on April 21.