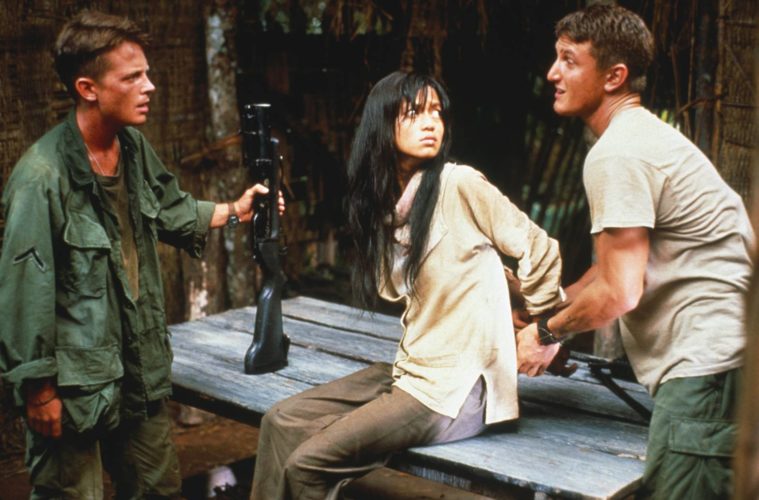 Taking a glance over his filmography, it’s quick to surmise Brian De Palma’s lack of interest in the words “Inspired By” or “Based on a True Story.” His attraction to images leans so heavily towards their natural falsity rather than some kind of prosaic yet still wholly phony verisimilitude. But one of the few exceptions lends a tragic weight that few of his films have.

The true story in question is what’s commonly referred to as Incident on Hill 192: in 1966, an American army squad in the Vietnam War kidnapped a young village girl, then subsequently gang-raped and murdered her. Journalist Daniel Lang brought this to further public attention with a 1969 article in The New Yorker entitled Casualties of War, of which De Palma’s film would share the name.

It caught the attention of screenwriter David Rabe and then De Palma, who had, since the late ’70s, been interested in making a film out of Lang’s article and later book; of course, with such blatantly uncommercial subject matter, it faced a difficult time getting made, even within the landscape of “downbeat” New Hollywood cinema. Yet having the way paved by the critical and commercial success of The Deer Hunter, Apocalypse Now, Platoon, and Full Metal Jacket, the film landed in the summer of 1989, where it must’ve seemed utterly alien to a season that hosted numerous blockbuster sequels.

Despite coming off a number of studio assignments and sleazy thrillers, De Palma’s attraction to the material wasn’t necessarily difficult to detect; amidst the Kael-Sarris Hitchcock-centered culture wars, it seemed forgotten that he began as an overtly political filmmaker taking aim at American culture, government, and, in particular, the Vietnam war with early works such Greetings and Hi, Mom! in the late ’60s and early ’70s.

Yet with a twenty-year gap between the publishing of Lang’s article and the release of De Palma’s Casualties of War, there comes the feeling of needing to interpret all this as some kind of exorcism of the war. In separating it from Vietnam-film predecessors, the easiest thing to note is how the scope is reduced from an all-encompassing “war is hell” howl into the night to a specific incident, the statement one could make being that Casualties of War sought to tackle a moral failing that spoke for all of the conflict — or, even grander, the United States’ ugly imperialist history.

Though within De Palma’s per usual domineering formalism, Casualties of War doesn’t pat us on the back for our righteous anger, but speaks to how we’re doomed to being complicit. His running theme of voyeurism is put in a wholly moral context. Curiously, while Casualties of War may be the man’s most earnest film, it makes a just comparison with Body Double, likely his snarkiest. Both adopt a key theme from Vertigo: the remaking of a woman into another image, in this case beginning with Max Eriksson (Michael J. Fox) asleep on a subway years after the war, only to wake up to the sight of a Vietnamese woman, her appearance instantly flashing us back to him in the midst of battle.

Like Body Double‘s Jake Scully (played by non-entity Craig Wasson), Eriksson is a beta male in a world of alphas. (You can easily substitute institutions within Hollywood for the armed forces.) In his platoon he’s outnumbered by the demented (Senn Penn’s Sgt. Meserve and Don Harvey’s Cpl. Clark) and the sheep-like of his rank (John C. Reilly‘s Pvt. Hatcher and John Leguizamo‘s Pvt. Diaz) willing to give in to a corrupt authority or groupthink. Eriksson plays the witness to their kidnapping of Than Thi Oanh, the Vietnamese village girl — yet even if he’s moral, he’s still ultimately naïve (“I thought we were supposed to be helping these people”) and, above all, unable to act, as exemplified in his recurring utterance of “I’m so sorry”.

Two of De Palma’s trademark split-diopter shots reconfigure, within this moral context, the thriller trope of an audience knowing more than the characters: tension escalates from Meserve shaving in the foreground, the rest of the platoon in the background unbeknownst to his unease, which the audience, seemingly in real-time, sees morph over his face — a restrained moment in Penn’s overall animalistic performance. Within the span of seconds we understand that, yes, something bad is about to happen. In the other instance, Eriksson fires away at the enemy while, unbeknownst to him, the platoon’s victim is stabbed repeatedly by Clark, Eriksson’s continuing inability reaching its most devastating end.

There’s an effort to render the perspectives differently: predatory, roving Steadicam shots through the eyes of Meserve and Clark that recall the fake slasher film within Blow Out. (In the second instance of, an attempted assassination attempt on Eriksson includes the sight of a gloved hand straight out of a giallo.) Or, to expand the kind of God’s-eye view of the split-diopters through an opening battle sequence that doesn’t hesitate to break from the American soldiers as soon as Eriksson gets stuck in a hole, the camera traveling underground to the sight of his legs dangling while Viet Cong soldiers move through the tunnels. This is their land under attack.

When confronting the rape at this film’s centre, De Palma holds on to a master shot in a canted angle, cutting through clear daytime to a rainy night that begins with Eriksson walking away in disgust and shows each man taking their “turn” with the girl. Keeping the assault out of view enough not to aestheticize it — yet in an expressionistic mode far from the formalist sanctimony of Michael Haneke — the film, by its second half, becomes something of an opera, be it Ennio Morricone’s score swelling or a brief, Wong Kar-wai-like use of slow-motion as rain pours down Eriksson’s helmet the moment we realize he witnessed all of this and didn’t do anything.

Yet the most tragic note comes when the film ends where it began: Eriksson wanting this woman on the subway to be Than’s reincarnation or proof she somehow escaped to redeem himself, the image playing over and over again in his head likely akin to the 360-degree shot in Blow Out of the dying Nancy Allen in John Travolta’s arms. Speaking to our near-masochistic desire to revisit works in the hope that we can reverse the tragic outcome, Casualties of War perhaps transcends the very label of “war film.”