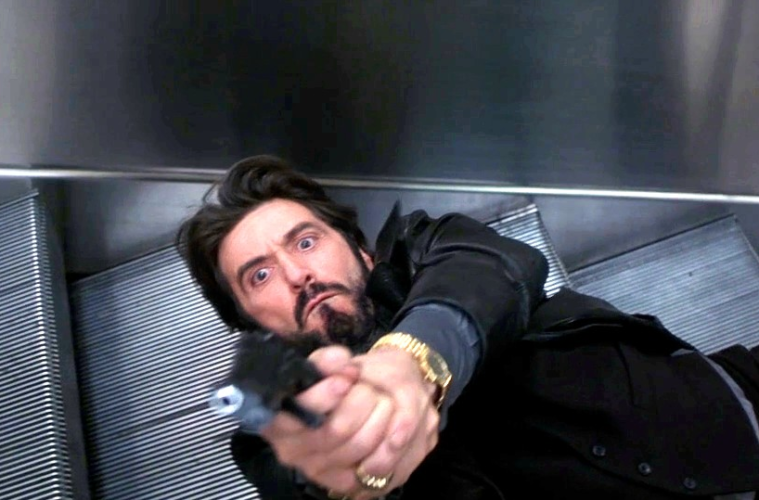 “Did you ever kill anybody, Charlie?”

Penelope Ann Miller’s Gail asks this of Al Pacino‘s Carlito Brigante throughout Carlito’s Way, a thoroughly impressive piece of studio entertainment from Brian De Palma, the first of the director’s trio of films with accomplished screenwriter David Koepp (Mission:Impossible, Snake Eyes). Released a decade after Scarface, this film plays, in many ways, as a more intelligent, more mature counterpart.

The parallels are obvious. Both Scarface and Carlito’s Way are gangster films starring Pacino, directed by De Palma, and produced by Marty Bregman. Cocaine is a large motivator in both. Carlito is set in 1975. Scarface is set in 1980. There’s even a prevalence of cockroaches (said and seen) in either. It’s the differences that reveal how De Palma grew as a filmmaker painting on a large canvas. Gone is the over-the-top turn by Pacino as Cuban refugee Tony Montana, here replaced by a tragic, romantic performance as Carlito Brigante, a New York-born, Puerto Rican ex-con looking for a way out. Gone is the three-hour runtime full of superfluous camera moves and slow-motion explosions of violence, replaced by a comparatively tight 140-minute social examination of a criminal trying to assimilate into an environment built on corruption. And though by no means subtle, Koepp’s screenplay builds characters while Oliver Stone’s Scarface screenplay creates caricatures.

Where Tony Montana quite literally represents American capitalism, Carlito is merely a cog in the wheel of commerce, trying to survive as much as he’s trying to succeed. Just as he is released from a 30-year sentence on a legal oversight caught by criminal (and criminal) lawyer Dave Kleinfeld (Sean Penn, in one of his most underrated performances), our man will fall due to his own oversight in not killing Benny Blanco from the Bronx (John Leguizamo).

De Palma choreographs this ending from the start, opening in black-and-white as Carlito is shot dead in front of Gail, his lover. It’s an introduction in which the director announces how the next two hours will blend cynicism with compassion. This is a world where the question that Gail continually poses lacks an easy answer. Similar to Pacino’s Donnie Brasco performance, Charlie is a man riddled with the complexities of his past. A killer and a good man. Furious and full of compassion.

A large theme looming over the proceedings is the idea of loyalty among thieves. Against his better judgment, Carlito is forced back into a world of crime by Dave, the man who delivered his freedom. And though the logic is flawed and the irony clear, we understand his plight: he was raised into a situation in which one of the only rules was to be loyal to his friends, for better or worse. This kind of dilemma does not exist in Scarface. Sure, Tony makes a big deal about not being a rat, but friendship means very little to him. Hell, the man watches one friend get cut up by a chainsaw and murders another. It’s these touches that elevate Carlito’s Way not just above Scarface, but most of De Palma’s work.

Now, make no mistake: De Palma’s usual stylistic tropes are still present. The voyeurism highlighted in his ’80s pictures (Dressed To Kill, Body Double) rear their head in a scene where Carlito finds a rooftop from where to watch Gail dance undisturbed. The violence of those same films pops up in the bar shootout scene, which ends with the brutal death of a young, dumb John Ortiz. Even the overlong, overwrought, and quite amazing set-pieces from films such as The Bonfire of the Vanities shine through in the climactic chase through New York City’s subway system, ending at Grand Central. This fusion of intelligent design and intelligent deliberation is a rare gem in De Palma’s oeuvre.

If there’s one thing Carlito does lack, it’s trickery. We watch the hero die in the beginning and he dies at the end. The narrative remains relatively straightforward, Koepp relying on internal voiceover from Carlito throughout to navigate each turn. There’s a social awareness and an ultimate skepticism that fuels the proceedings, more closely resembling a ’40s noir than an ’80s De Palma picture. In the context of the filmmaker’s projects with Koepp, this first one appears to have the most Koepp in it. Mission: Impossible got taken over by Tom Cruise, who replaced the scribe with Robert Towne, and Snake Eyes was co-written by De Palma himself.

Upon its initial release, Carlito’s Way received lukewarm notices and was somewhat ignored by audiences. The New York Times called Carlito “a vaguely written, not-so-clever character,” while Peter Travers in Rolling Stone accused De Palma of copy-catting his own Scarface in “the need for a hit after the debacle of The Bonfire of the Vanities.” With time, these takes feel undercooked and reductive. Pacino has rarely been better and De Palma’s rarely been more impactful. For an auteur applauded for his sense of style, there’s plenty of substance here.