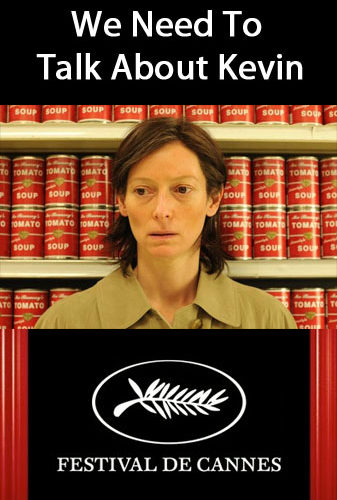 [Cannes Review] We Need to Talk About Kevin Adapted from a novel written by Lionel Shriver in 2003, We Need to Talk about Kevin is told from the prospective of a mother whose teenage son commits a massacre at his high school. The mother deals with the murders that her son has committed by frequently writing letters that discuss the nature of her child to her estranged husband. With beautiful cinematography and symbolism, Lynne Ramsay, a Scottish film director, has approached her third film in a distinct way. Ramsay grasped the concept of the story and created her own interpretation in this adaptation.

Dramatically opening with a striking scene where actress Tilda Swinton, who plays Eva, is submerged in a sea of smashed red tomatoes. The camera gives an overhead shot of Eva being carried away crucifix style by a group of people. As the scene quickly changes, we are reacquainted with the color red, as red paint covers the windows of her car and the front of her home. In response to her son’s irrational murdering spree, the community has shunned Eva for her son’s wrong doings, and has caused her to become an outcast. Ramsay’s film focuses on the relationship between Kevin (Ezra Miller), the disturbed teenage boy, and his mother, Eva. The question is raised whether Kevin developed his violent behavior through nature or nurture, seeing as though Ramsay made a point to implement the scene where as an infant Kevin frantically cries endlessly when in the company of his mother. Through precise dialogue the audience is able to understand the difficult relationship they share, such as the scene where Eva tells her young son that she was much happier before he was born, and would now rather be in France.

Interestingly enough, it is obvious that Kevin’s hostility is only directed to his mother, except for in one scene where Ramsay brilliantly leads us to believe that perhaps the smart Alec child was finally coming around. In this particular scene, the young Kevin is sick, and feels the need to be embraced and nurtured by his mother, as he begins to give his father the same hostility that he has been giving Eva. The scene allows us to see the vulnerable side of both the mother and child, due to the fact that they appear to be finally happy together and emotionally connected to one another. In addition to the contentious theme of nature vs. nurture, Ramsay applies different forms of symbolism. From the very first scene, there is a recurrence of the color red; red tomatoes, red tomato soup cans, red paint, and even the red teddy bear that Eva’s daughter plays with. In a superb supporting role, John C. Reilly returns to his serious side reminiscent of his characters in Paul Thomas Anderson‘s earlier films. Miller fit perfectly into the role of Kevin, as well as the remarkable child who played the younger Kevin (Jasper Newell). However, it is Swinton who shines at successfully mastering the emotion of a mother who is struggling to love and accept the dysfunctional relationship that she has with her son. Swinton delivers her lines with grace, but it is her solemn facial expressions that make it one of the best performances of the year thus far, dripping with depression and a disturbing loneliness.

Kevin is an outstanding, moving feature from Ramsay. Through her distinctive approach violence was mostly implied, despite a few harrowing scenes that showed the brief aftermath of the brutal murders. Ramsay was able to depict the emotional effect of brutality without having overblown gratuity. We Need to Talk about Kevin may be psychologically disturbing for some, but its bleak, poignant look at guilt speaks to all.