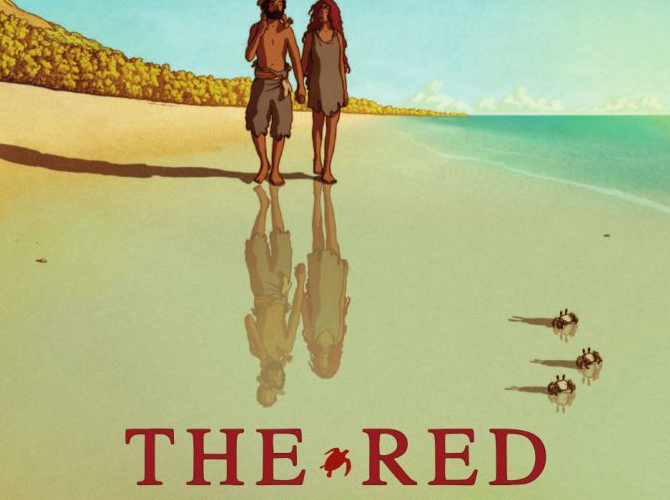 Motion, love for the Gaia, and lush orchestral music provide the backbone of Michaël Dudok de Wit’s The Red Turtle, a dialogue-free, feature-length animation about a man stranded on a desert island, co-produced by the legendary Studio Ghibli, their first-ever such production to be made off Japanese soil.

The story goes that producer Vincent Maraval from Wild Bunch showed De Wit’s Oscar-winning short animation Father and Daughter to Hayao Miyazaki in 2007. The legendary animator much admired the film, calling it “very Japanese,” and asked Maraval to locate De Wit. They sent the Dutchman an email, and so The Red Turtle came into being.

With Miyazaki since stepping away from Ghibli productions, Isao Takahata was tasked with making trips to France to contribute to the film. This meeting of styles is apparent from the opening frames as an overturned sailboat is thrashed around in a vast raging sea, a beautiful allusion to Katsushika Hokusai’s The Great Wave off Kanagawa — perhaps the most famous piece of Japanese art in existence. The man survives this great storm and washes up on the desert island he’ll come to know as home.

All things considered, it’s not a bad spot. The island boasts a fresh water supply, an abundance of some sort of avocado-looking fruit, a tall rock mount for looking around, and a lush growth of bamboo trees that provide our Crusoe with the tools and materials for building. As expected, it’s a locale rife with possibilities for this talented animation team. Night-time imagery is shown in moonlit black and white and the daytime is colored in turquoise blues and mossy greens. There is a dedication to minimalism to the ocean and beach imagery that feels very Japanese. The dream sequences also boast a surrealist quality, and there are even a number of nail-biting dramatic set pieces.

De Wit excels at producing compelling drama from such extreme self-imposed limitations. Indeed, despite there being no dialogue and very few characters, the film consistently celebrates the excitement of exploration and invention while also keeping the audience aware of the man’s growing frustrations, like the awful finality of falling down whens there’s no rope or ladder or hand to help you up. The man’s only co-inhabitants are a small charming cast of crabs and, as you might have guessed, a big red turtle. The man builds bamboo rafts in an attempt to escape his prison but they keep getting destroyed, despite improving the durability and design with each effort. We soon learn the culprit — no spoilers — is the titular beast.

The film centers on the resulting symbiotic relationship between the two beings, a very literal embodiment of our own relationship with nature. The director chooses to use a bizarre plot device to solidify their bond, one that asks the audience to suspend a good helping of disbelief. Without giving anything away, the event takes the film in interesting new directions, but it sticks out, especially when considering that the rest of the story is relatively grounded in reality. Liking or loving — or perhaps even hating — The Red Turtle will come down to whether on not the viewer can accept it. It’s always beautiful to witness, nonetheless.

The Red Turtle premiered at the Cannes Film Festival and will be released on January 20. See our coverage below.