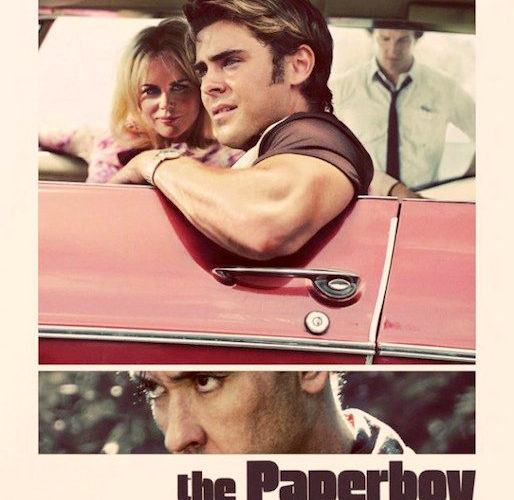 Operating on a level of ridiculousness so high it suggests possible intention, Lee Daniels‘ The Paperboy is trash pile packed high, high and higher still. Adapted from the Pete Dexter novel of the same name and set in swampy Florida in 1969, the film stars Matthew McConaughey and Zac Efron as Ward and Jack James, a pair of brothers out to prove the innocence of one Hillary Van Wetter (a sweaty John Cusack), a man sitting on death row for slaughtering the local town sheriff. Van Wetter’s got a pen-pal girlfriend named Charlotte Bless (Nicole Kidman) determined he be freed from jail. Charlotte, who has been flirting with all of the prison boys by post, decides that Hillary is the one she loves. Likewise, when Jack meets Charlotte, he is immediately head-over-heels devoted to her. As fair as synopsis goes, let’s just stop there. There is so much jumbled and spit out of this hot, strange, sloppy mess of a film that it would be a sin of sorts to spoil it all, if those reading decide it’s still worth a watch. Daniels shot into the stratosphere of filmmaking credibility with his last film Precious, garnering plenty of Oscar nominations and even a couple of wins (for Adapted Screenplay and Best Supporting Actress). To be sure, The Paperboy will elicit no nominations of any kind.

Whether intended or not by Daniels, this film is ham and cheese. Consider a sequence in which Efron’s Jack decides to swim at the beach, after Charlotte’s made him angry for some such reason. While swimming, Jack is attacked by jellyfish to the point of unconsciousness, barely making it back to the sand. Suffering from the poison, Kidman’s Charlotte is forced to urinate on him. As one would be, of course.

There are constant narrative ends, both split and dead, that occur and then are completely forgotten. Macy Gray‘s maid character Anita opens the film in the middle of an interrogation of sorts, serving as the bookend of the narrative. Her voice over throughout is obvious and unnecessary, only adding to the absurdity of the whole thing. At one point, Anita becomes omniscient narrator, talking directly to the audience. Any suggestion or indication that this will become a running, all-knowing commentary is tossed to the wind as Anita, and her voice, all but disappear from the picture. Many subplots and ideas are tossed in and then thrown right back out all over the course of the proceedings, most all of them offensive, intriguing and admittedly entertaining. This is an early Todd Haynes film with more camp and far less intelligence, both technically and conceptually. Aesthetically, Daniels is all over the place. While some of the film is shot to look like a washed-out melodrama, other scenes read like a Southern gothic thriller.

That said, there is no doubt this bewildering, cinematic beast will find a small, devoted audience in due time. It has all the trappings of a cult classic. Cusack, to his credit, is clearly enjoying playing the furthest away “against type” can get, along with Kidman, who struts, swoons and pouts with more glee than we’ve seen from her in some time. And hey, for those who like Mr. Efron, he’s in his tightie-whiteties a whole lot. As far as his acting abilities go, the jury remains out. It’s quite unfair to wholly criticize the young man for something like this.