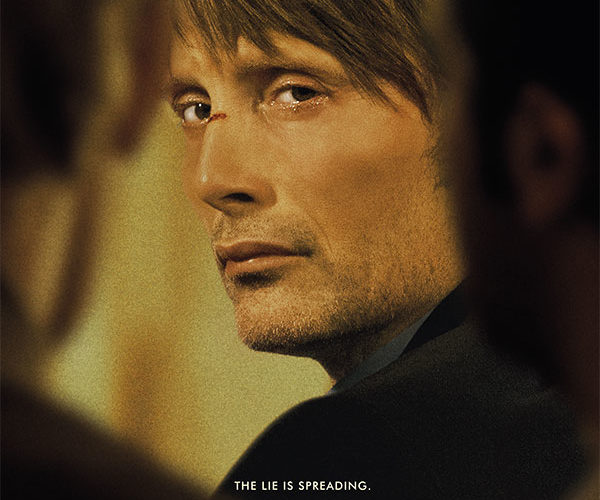 After making big waves with his Dogme classic The Celebration in 1998, Danish filmmaker Thomas Vinterberg has made a handful of flawed and underseen films, whether the genre be post-apocalyptic sci-fi (It’s All About Love) or a pseudo-Western about a group of gun-wielding pacifists (Dear Wendy), that have rendered him largely unnoticed as of late. Let it be said that his newest work, The Hunt, will stand to change the tide. Starring Mads Mikkelsen in a decidedly, and impressively, domesticated role. Vinterberg takes his time with his narrative, looking into a very 21st century kind of witch hunt. Lucas (Mikkelsen) is a new teacher at a local kindergarten, recently divorced and at odds with his ex-wife over custody of their teenage son. He’s an engaged educator, interacting with the young children and developing close relationships with all of them.

Perhaps his closest relationship is with Klara (Annika Wedderkopp), daughter of his best friend Theo (Thomas Bo Larsen) and his wife Agnes (Anne Louise Hassing). Klara confuses Lucas’ intentions, kissing him on the lips during one play session at the school. When he politely tells her it’s inappropriate, she concocts a story that leads other teachers in the school to draw conclusions of sexual abuse.

While this is serious subject matter to tackle, Vinterberg allows comedy to play through the narrative, acknowledging the absurdity of blindly believing the words of a child. As Lucas’ friend Bruun (Lars Ranthe) states, “People assume children always tell the truth. And the sad part is, they usually do.” Lucas tells his new girlfriend (Alexandra Rapaport) of the accusation early on, her only reaction is laughter. What else can one do when they here something insane? And so it is, assumption becomes the driving force here, a silly lie taking up and up into the stratosphere, out of both Klara and Lucas’ hands. By the time Lucas understands the severity of what’s happened, it’s too late. Beautifully lensed by cinematographer Charlotte Bruus Christensen, each shot observes Lucas as though he were the same game he and his friends hunt during their weekend trips. An abundance of natural light is used to achieve both a sense of foreboding and naturalism.

This is a piece of filmmaking in which everything is in its right place. The story, though it be a tad familiar, is fully and completely told with each and every component perfect cast and crewed. Even if one walks any from the experience un-phased and underwhelmed by the messages at play, there is no denying the technical skill on display from Vinterberg and his team. Mikkelsen hasn’t been this good in a long while, and those supporting him are, at the very least, his match. Larsen’s turn as Lucas’ once-friend now enemy is devastating to watch and enviable in its full-ness of character. These are the parts actors kill for; the ones where you can flex all of the dramatic muscles without ever having to shout or spit or go to far over the top.

The Hunt offers us, in two hours, a look at the world we exist in, and the equally dangerous world inside our heads. And how the two are both very different and very, very similar.