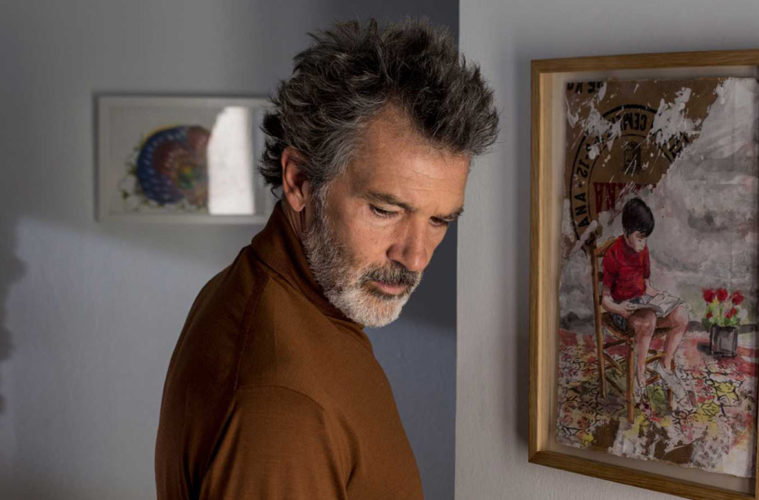 Cannes Review: ‘Pain and Glory’ is One of Pedro Almodóvar’s Most Personal, Exceptional Works

Pedro Almodóvar, the punk chronicler of post-Francoist Spain, turns inwards for his 21st feature Pain and Glory, which arrives in competition at Cannes as a summation of his storied career, a quasi-self-portrait of an artist as an older man. Even for Almodóvar, this is an especially personal work, anchored by the director’s on-off muse Antonio Banderas in perhaps his greatest performance and sweeps through the Spanish maestro’s recurrent themes: high melodrama and kitsch comedy, piety and carnal lust, sex and death, human pain and transcendent glory.

Banderas dons Almodóvar’s signature spiky hair as film director Salvador Mallo, struck by writer’s block in a role superficially akin to Marcello Mastroianni’s in 8½. But Pain and Glory lacks the showiness that became Fellini’s trademark in his post-neorealism years. Instead, like 2016’s Julieta, this is a muted, exquisitely plotted and sometimes deeply serious late-period work from Almodóvar, which paces itself mysteriously but never puts a foot wrong, unravelling until its last frame in a twist that encapsulates an entire career of self-expression in a magnificent flourish. This is perhaps the director’s most outstanding work since his peerless fin-de-siècle diptych of Talk to Her and All About My Mother.

There is something of an extended therapy session about the film, which focuses so intensely on Salvador’s mental state (“Naturally, I’ve dealt for years with depression”) as to make Banderas, often such an energetic presence, almost unrecognizable. Salvador’s memories lie in knots, fragments of his childhood presented on screen seemingly without context and out of sequence with other scenes. The movie opens with Salvador as a toddler watching his young mother (Penelope Cruz, dazzling in a handful of scenes) singing gitano lullabies. A following flashback shows him in the choir at a seminary not unlike that of Bad Education. Then there’s an encounter with a strapping young man in his village, a genesis of the character’s homoeroticism that later transpires, like all these scenes, as a major turning point in his life. (Salvador, incidentally, is played in flashback by a miraculous young actor, Asier Flores).

In the present day, a chance meeting (so much of Pain and Glory is serendipitous circumstance) leads Salvador to the house of Alberto (Asier Etxeandia), a star of one of his hit early films that Salvador had previously loathed. But a rewatching gives Salvador a grudging admiration for it: “It’s your eyes that have changed, the film has stayed the same.” Alberto is himself in a similar stage of arrested development, passing the time smoking crack, but as the two team up and get high together, Salvador inadvertently saves Alberto from spiraling out of control. Salvador lets him put on an unproduced one-man play, a work of “autofiction,” as the director calls. It dovetails in and out of fact and fiction, of Salvador’s–and presumably Almodóvar’s–own personal history. A poster of Hamlet on the wall of Alberto’s dressing room foregrounds that this is a film working–like Shakespeare’s play-within-a-play–on a number of different narrative planes.

Yet there are no moments of flamboyance in Pain and Glory, and little of the joyous exuberance that marked the most purely enjoyable of Almodovar’s forays. Pablo Iglesias’s music plays with different modes–electronica and orchestral go hand in hand, as if expressing the different sensitivities of Almodóvar’s oeuvre and Paola Torres’s colorful costumes signal artistic sensitivities beneath Banderas’s aloof, but no less absorbing, expressions.

And a few final scenes with Salvador’s dying mom, now played by a scene-stealing gusto by Julieta Serrano, showcase why Almodóvar is so strong at bringing together levity and profundity. “I’m sorry I haven’t been the son you wanted,” Salvador says, holding back his emotions, as if betraying them would be an admission of defeat in battle with a mother whose power over him is inextricable. What marks this out in the Almodóvar canon, in a way I hadn’t expected, is this mother is a deeply flawed and perhaps prejudiced women who has defined her son life, driven him to extremes of mental anguish, but push him to towering artistic heights.

Like Salvador rewatching his old movie, this is a film about reassessment of the past, but moreso about renewal of the mind and body, about overcoming mental burdens, and about human resilience. At times, Pain and Glory feels distant, controlled, unwilling to show emotional its hand. By its close it’s a film that clings onto your heartstrings and doesn’t let go.

Pain and Glory screened at Cannes Film Festival and opens on October 4.