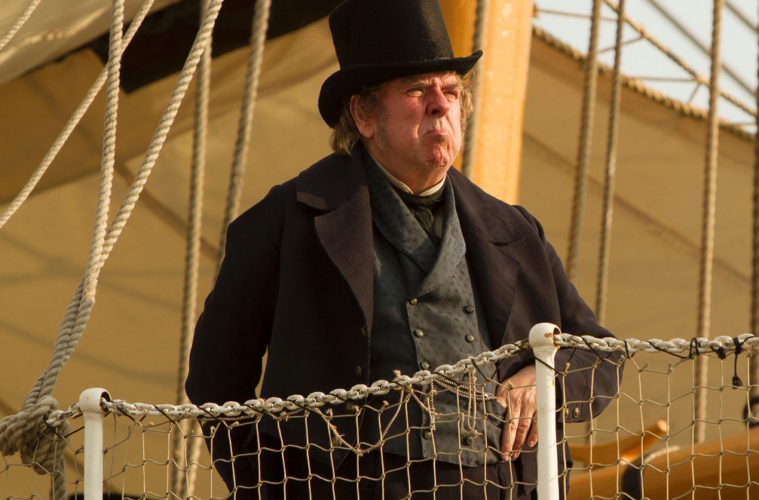 On their surfaces, Mike Leigh and J.M.W. Turner — the artist at the center of his latest film, Mr. Turner — couldn’t seem more like polar opposites. The 19th-century English painter created colossal landscapes of ships and seas, odd impressions that feature little in terms of human life. Leigh, the director of Naked, Topsy-Turvy, and Another Year, works on a microcosmic scale, investigating psychology through dialogue and camera movement, finding precise moments at which the human shell can break. But both are perceptibly searching for the in-between — or, as one character in the film suggests, turning “particles into chaos.” These two artists search for the essence of life through the blending of the material building blocks of the world, offering much to ponder without necessarily asserting their own importance. Even if the artist is a fool, the work will always stand.

And what a fool William Turner is! Fat, grotesque, and often responding to inquiries with a series of bemused grunts, Turner is not the kind of person you want to crown as a genius. Timothy Spall, a Leigh regular, couldn’t be more detestable (and thus compelling) in his portrayal of the artist ahead of his time. Though ostensibly a biopic, Mr. Turner is essentially plotless for most of its runtime. This is not untypical of Leigh’s work — he doesn’t reveal character through action, but through slips of backstory folded into his interactions (a product of his now-famous script development phase). Turner’s dialogues with his similarly boorish father (Paul Jesson), his maid (Dorothy Atkinson) who gives him unrequited love without understanding his work, and the various, seemingly random characters he encounters in his life are packed with tidbits that bring this strange artist to life, a fellow who finds solace better in those who know him outside of his work. (This is most notable a romance he begins with Mrs. Booth [the delightful Marion Bailey], who supports him without ever once even approaching him about his work.) This tension drives Leigh’s portrait as the artist travels around England, capturing the most gorgeous of landscapes in an early form of impressionism in the Romantic Era. Turner becomes essentially obsessed the paradox of the sublime of the landscape — fitting for an artist with a love of modesty while abhorring class and social intellectualism. He constantly rejects any chances to enter the upper crust of society, mocking both high-minded intellectuals — a sequence with a young, high-minded Mister Ruskin, who resembles your freshman seminar’s worst nightmare, is one of the film’s hilarious highlights — and those who cannot truly appreciate their art, instead seeing it as grotesque. Turner even defies the process of art as some beautiful craft by throwing his paintings together in blunt gestures and with non-traditional materials. In one magnificent sequence, he mocks a fellow tinkerer by splashing a giant slob of red paint right into the middle of his piece, leaving everyone in disbelief until he returns to transform the slob into a gorgeous buoy.

It is a gorgeous world that Turner encounters, even if Turner is not. Leigh’s camera searches this world through slow and ponderous movements, every gesture by an actor as carefully calculated as the forceful actions Turner throws onto his canvases. Leigh and regular DP Dick Pope zoom around these magnificently art-directed spaces, often focusing on the windows that become the landscapes of Turner’s canvases. Magnificently staged though the long takes may be, it is often his shot-reverse-shot sequences that define the essence of Mr. Turner. They appear only rarely, but the precise timing of the edits and changes in composition highlight the unspoken psychology of the characters with piercing honesty; an early piano duet between Turner and a woman takes on sensual qualities simply through the careful pushes Leigh cuts between his two characters.

In many ways, the confounding work Leigh has made here rivals Barry Lyndon — partly in aesthetic goals, though mostly through its ability to elide any confirmed meaning. That is, until the film’s final third, in which Leigh finally stakes his claim in the idea of Turner as a misunderstood artist before his time. Too many scenes focus on his audience’s lack of understanding and sympathy for the work, an obvious gesture that does little to focus on the intense psychology and sociology earlier scenes provided. And the film’s final turn toward the age of mechanical art — steam engines and, most frightening to Turner, photography — places him in a context of a man caught in the wrong time. It’s not that these sequences lack the majestic rigor of Leigh’s artful camera movements, but that Mr. Turner’s most refreshing aspect, an elusiveness of meaning, evaporates in order to bring closure to the character and the film.

Or perhaps it only appears so on the impressionistic surfaces. For running two-and-a-half hours, the conversations and gestures in Mr. Turner are packed with such intense thoughts (while never taking on a sense of grand proportions) that attempting to take it all in on a single viewing can prove overwhelming. Contemplating the sublime, especially one with such deceptive crevasses, may require a lifetime.

Mr. Turner premiered at Cannes Film Festival and will be released on December 19th, courtesy of Sony Pictures Classics. Watch the trailer here.