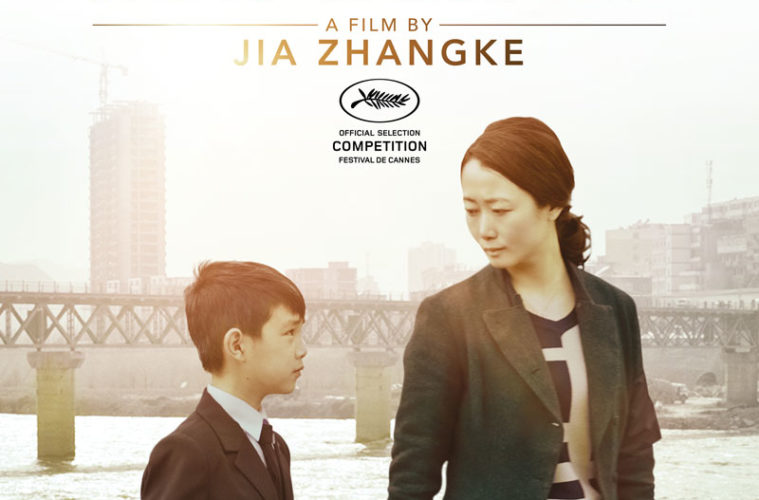 Though vastly more moderate than its predecessor, the ultra-violent A Touch of Sin, Jia Zhangke’s Mountains May Depart continues the director’s move away from the extremely measured, observational style that characterized much of his earlier work. Even as his narratives have become more charged, however, Jia’s thematic focus has remained constant and Mountains May Depart offers his latest reflection on the momentous societal changes that have swept over China as a result of its entry and ascension in the globalized world economy. If A Touch of Sin expressed Jia’s rage at the contemporary impact of capitalist progress on Chinese society, Mountains May Depart is his lament over the direction in which it is headed.

Fittingly, the film opens to the Pet Shop Boys’ “Go West,” a song that develops into a leitmotif as it is repeated at different stages along the protagonist’s trajectory, its ironic connotations turning increasingly tragic each time. This character is Tao (Jia’s wife and regular star Zhao Tao), an ebullient young woman living in the northern town of Fenyang. In the first and longest of the film’s three chapters, set in 1999, she is courted by two suitors, the coal miner Liangzi (Liang Jin Dong) and the budding capitalist Zhang (Zhang Yi). At the outset, they are a merry triangle. Then, in conjunction with economic upswing that elevates Zhang’s financial and social standing, the rivalry between the men grows increasingly hostile and the triangle falls apart. Liangzi leaves town altogether when Tao and Zhang get married and the chapter draws to a close with the birth of their son, who Zhang names Dollar in celebration of his rapidly accumulating fortune. The film leaps forward to 2014 in its second chapter, which sees Tao still living in Fenyang but divorced from Zhang, whose wealth has skyrocketed and has moved to Shanghai with Dollar, while Liangzi returns, impoverished and dying of cancer. The final chapter takes place in 2025 and is mostly set in Australia, where Zhang and Dollar have emigrated, living in a futuristic society where the youth of the large Chinese expat community no longer speak Chinese and study their own culture at university.

Mountains May Depart turns more melancholic as time progresses, reflected in Tao’s gradually dimming disposition as well as the film’s evolving cinematography. With each chapter the frame widens, growing from Academy ratio to full widescreen. Simultaneously, the depth of field shrinks, giving visual expression to the notion that while the characters’ horizons – and by extension those of the society they represent – are literally broadening, their perspective is becoming increasingly shallow. The picture quality also changes with every time jump. Initially, the film has the somewhat drab look of a pre-digital TV show, turning more refined in the second chapter, and culminating in a blindingly bright glossiness worthy of a videogame – extremely polished, but deprived of any character along with its depth.

This last chapter is the least successful of the three. The narrative’s allegorical dimension, though distinct, had never been obtrusive up to this point. Once the action relocates to Australia, however, this balance is lost and the film turns clumsily schematic. Elements like the adult Dollar (Dong Zijian) and Zhang being incapable of communicating except via Google Translate feel overdetermined, especially through such dialogue as, “Google Translate is your real son!” Cultural amnesia notwithstanding, Dollar was 14 and fluent in Chinese before leaving his homeland. It also doesn’t help that Dong, a pretty mediocre actor, speaks English with a marked Chinese accent. Generally, Jia’s handling of the language is awkward, underlined by the appearance of the film’s only Western actor, an Australian, who delivers his few lines with an expressionlessness so extreme, even if it were intended to be comical, comes off as acutely cringe-worthy.

Despite these shortcomings, the Australian segment only takes up 20 minutes or so of the film’s running time and is unable to ruin the whole. The first two chapters are peppered with appealingly mystifying anomalies, which further enrich the central narrative with a fascinating vitality. Examples include the characters’ wardrobe being limited to a single outfit for the entire opening chapter (Tao’s rainbow sweater reappears on her dog 15 years later), the image’s seemingly arbitrary switch to video in specific scenes, or how an airplane suddenly hurtles down from the sky at one point, exploding in a fireball in front of Tao, never to be mentioned again. Crucially, Zhao gives yet another wonderful lead performance and the tonal shift from epoch to epoch is heartbreaking to experience through her character’s perspective, particularly in the long sequence when the young Dollar comes to visit from Shanghai and barely relates to her as his mother, already well on his way to discarding his roots.

Fortunately, Mountains May Depart returns to Fenyang in its closing moments and reunites with Tao, who never left. As “Go West” plays for the last time, she gives one final demonstration of her fortitude, leaving us with a lyrical, bittersweet and pitch-perfect bookend.

Mountains May Depart premiered at Cannes Film Festival and opens on February 12th. See our complete coverage below.