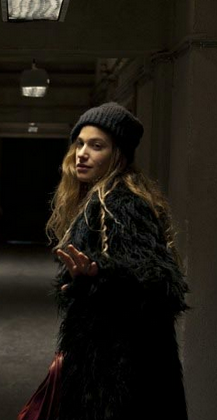 [Cannes Review] Me and You

Though he’s a filmmaker who has painted on a large tapestry, both literally and figuratively, Bernardo Bertolucci‘s new film Me and You is decidedly smaller in scope. Nine years since his last film, The Dreamers, it is nearly enough just to have the great storyteller back in the game. Nearly.

Concerning a strange 14-year old named Lorenzo (Jacopo Olmo Antinori) and his quest to avoid any and all people, most especially his cold and distant parents, Me and You plays out as more of an excuse for visual flourishes more than anything else. And though those flourishes are vibrant and creative and cinematically satisfying, the story going on around it never draws us in enough. A big part of the problem is Antinori, who fails to create a lead character worth completely investing in. There is no doubt the kid’s got some acting chops and a distinctive face that could well serve him in the future, but here he doesn’t seem comfortable and, as a result, not altogether believable. Thankfully, the cramped basement Lorenzo hides in is invaded by his wild, creative half-sister Olivia, played with a welcome ferocity by Tea Falco. The actress’ introduction saves the film from its own convoluted seriousness, thanks to her loud and tragically funny character. Coming off a heroin binge, Olivia forces herself to quit cold turkey next to her half-brother, who hasn’t seen her in years. She was once a young painter of some renown, before the drugs. Lorenzo doesn’t quite understand what is going on at first, but slowly sees the situation in its full light, growing up a bit in the process.

These are emotionally-affecting, undeniably relatable themes going on that have, unfortunately, been explored in films with stronger leads and deeper through-lines. We care for Olivia and her plight, but have trouble latching on to anything more than her natural beauty and artistic flare. She never fleshes out into the character we want her to be. And it seems Bertolucci doesn’t really care. The director and his camera always feel distanced from these performers despite the close proximity of the space, choosing more than a few times to turn the camera away in the middle of some moments and capture something static somewhere else in the basement. There’s nothing wrong with this kind of aloof, pensive photography, as long as it amounts to a message or a pointed choice. Not unlike Francis Ford Coppola’s recent return-to-the-basics Tetro or even George Lucas’ nostalgic Red Tails, many of the great filmmakers from yesteryear have chosen to return to the playground, messing about with old ideas they’ve always wanted to mess with, ignoring their audience in doing so.

What we are left with is a pretty-looking, and pretty slight, story featuring one involving player and one who is severely lacking. While we welcome the master’s return to the craft he has mastered again and again, it feels as though he’s not quite as welcoming in return.