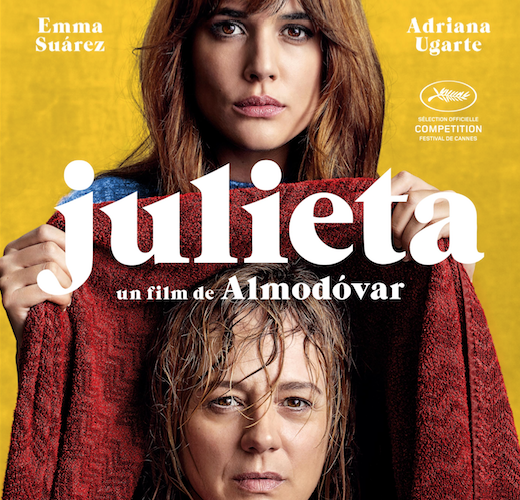 A woman recalls the pivotal moments of her adult life in Julieta, the latest film from Pedro Almodóvar and his fifth to screen in competition here in Cannes. It’s adapted from a series of short stories of Canadian Nobel prize-winning author Alice Munro and marks a return to the female-centric dramas with which the director made his name, having recently tried his hand at musical (I’m So Excited) and psychological horror (The Skin I Live In). It’s charmingly self-aware in its use of kitsch and melodrama — almost to the point of self-parody — and, while small in scope, it’s also one of his lusher and leaner offerings.

We open on blood-red silk and yellow titles, a characteristically strong visual language we’ll gorge on for the rest of the movie. We find the titular woman (played here by Emma Suárez) packing up her worldly belongings. We soon learn she’s about to move from Madrid to Portugal with her new partner (Darío Grandinetti). He thanks her for joining him in old age. She somewhat warily repays the compliment. Faith intervenes, however, when Julieta bumps into a woman named Beatrix (Michelle Jenner), a childhood friend of her daughter Antía, on the street. It later transpires that Julieta hasn’t seen her daughter in over ten years, and so when Beatrix informs her that Antía is alive and well with three children in tow, it prompts her to have a minor breakdown. The move is scrapped soon after. In a plot device that recalls films like Max Ophüls’ Letter from an Unknown Woman, Julieta puts pen to paper to narrate us through the major events of her adult life.

Cutting back, we meet a younger Julieta (now played by Adriana Ugarte) on a train journey where a suicide leads to a heady night with a man named Xoan (Daniel Grao), who will become Antía’s father. Julieta seems to attract such farcical moments of tragedy, but Almodóvar manages to play it with just the right amount of irony. The couple move in together to raise their child, but there’s a suggestion that Xoan might be having an affair with a local artist named Ava (Inma Cuesta). Unperturbed, Julieta makes friends with the woman and the trio form a very Almodóvarian love triangle. Another tragedy will later tear them apart.

With all due respect, it’s the stuff of daytime TV shows. What’s more interesting, perhaps, is the film’s visual style. Combining fluidly with Jean-Claude Larrieu’s cinematography and the wonderfully angular ‘90s costumes of Sonia Grande, frequent production designer Antxón Gómez’s world is the antithesis of drab. Julieta’s younger years are awash with color — we seldom go more than one shot without a youthful splash of sapphire blue, crimson red, or cornfield yellow — but her world grows duller with age and tragedy. A move to a stark modernist apartment late on informs us that all hope is gone.

Little of this is unappetizing, of course. Riffing on Spanish telenovelas, Hitchcock, and film noir, Almodóvar and his production team have put together a slight, but undeniably gorgeous bauble with a simple sort of story that nestles in somewhere between the high and lowbrow. Ugarte and Suárez might have made for great Hitchcock heroines. They certainly make great chicas for Almodóvar.

Julieta premiered at the Cannes Film Festival and will be released in the U.S. by Sony Pictures Classics on December 21. See our coverage below.