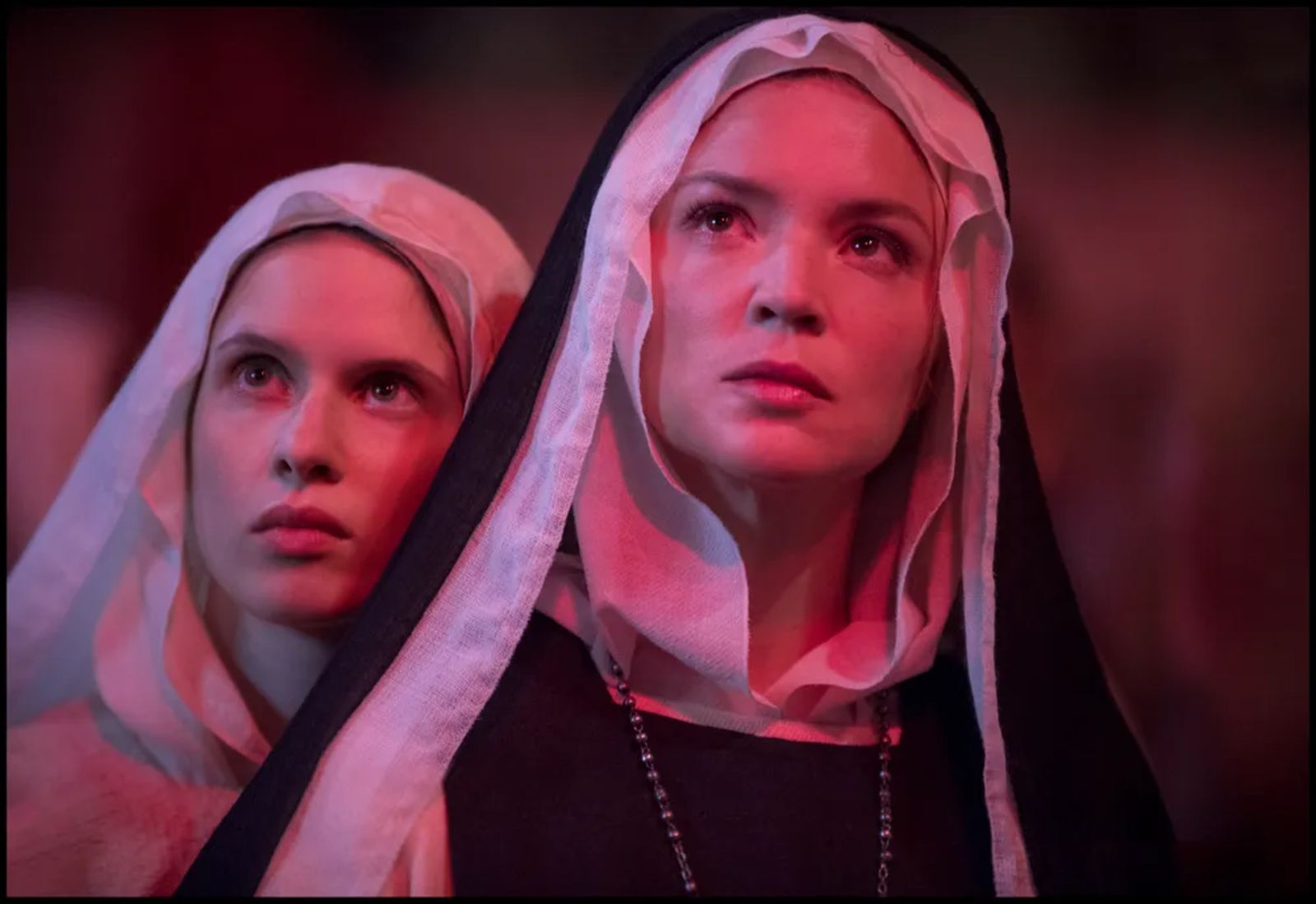 Many of the best qualities of early and late Verhoeven combine in Benedetta, a tale of sex, blood, and sacrilege in 17th-century Italy. Based on the American historian Judith C. Brown’s 1986 non-fiction book Immoral Acts: The Life of a Lesbian Nun in Renaissance Italy (quite the title), its story focuses on the life of Benedetta Carlini, a nun in Precia who entered a sexual relationship with another woman in her convent. Paul Verhoeven originally adapted the book with his longtime collaborator Gerard Soeteman (Black Book, Turkish Delight), but the screenwriter stepped down when it became too “sexualized.” In the opening act there are not one, but two fart jokes. We are also, in many instances, offered evidence of the director’s well-founded appreciation for mommy’s milkies.

Originally titled Blessed Virgin and pegged for release way back in 2019, it marks an ever-welcome return for the great director, his first outing since 2016 when Elle took Isabelle Huppert all the way to the Oscars. Elle co-star Virginie Efira reteams with the director as the precariously self-assured Sister Benedetta. Verhoeven introduces the character as a child who, on the way to take “the veil,” saves her well-to-do family from being robbed by praying to the Virgin Mary. The mother of Jesus seems to respond by having a bird shit in one of the assailant’s eyes. (Much of the film’s drama is drawn from that fine line between divinity and pure chance.) This formative experience speaks to Benedetta’s belief that she is a chosen vessel for the Lord’s work. (It would be a stretch to say this is Verhoeven’s answer to Dreyer’s The Passion of Joan of Arc, but there are some knowing similarities—as there are with Ordet.)

Verhoeven, as always, is more interested in playing games and is always at his best when needling an audience’s ideas of good taste. He positions Benedetta’s sexual awakening as empowering—near the start, a nun tells her younger self “your body is your biggest enemy”—while simultaneously positioning the character as a charlatan, sadist, and hypocrite. In one moment Benedetta claims, “I never sinned,” right before instigating a horrendous act on another woman. Such macro critiques of the Catholic Church come quick and fast (as does the cynical and incendiary dialogue: “you’d haggle like a jew for that?”). Verhoeven also visualizes Benedetta’s fantasies of actually meeting Jesus (hunky, tall, white horse), and of being saved by him from rapists and snakes (long sword, ultra-violence.) Her love interest, Bartolomea (Daphne Patakia), arrives to the convent a rural wild girl but soon bears a resemblance to both Benedetta’s fantasy savior and perhaps her fantasy snake. My Lord.

It is a deceptively complex role for Efira. Having joined the convent so you, the film asks the viewer to believe that Benedetta’s dogmatic rhetoric is sincere but also to consider that her actions and her searching eyes might suggest the work of an opportunist. By never quite convincing that both things are simultaneously true––that she could believe her own bullshit and be a ruthless schemer—Benedetta falls just short of greatness. Granted, the bar is set high. In a way, Elle did for Verhoeven what First Reformed would later do for Paul Schrader. In a recent interview with the Schrader, Richard Brody wrote, “That film transformed his status: from a hardscrabble survivor of New Hollywood’s golden days, he became… an iconic embodiment of the cinema itself.” Though producing work since the 1960s, Verhoeven will always be defined by the streak of masterpieces he directed in Hollywood in the ‘80s and ‘90s. There was much to love in Hollow Man (2000) and Black Book (2006), but Elle still felt like a necessary reminder of his unique genius.

There is nothing here to compete with that film’s shocking taboos and layered moral complexities––nor its eerily uncanny aesthetic. Verhoeven is having fun here, and it is nothing if not self-aware, but the provocations are a touch passé this time—sure, using a religious object as a sex toy might have been daring for William Friedkin in 1973, or even Ulrich Seidl in 2012, but it seems quaint or even vanilla by today’s standards. Shot by Jeanne Lapoirie, Benedetta’s blend of Hammer Horror and Game of Thrones imagery also leaves a bit to be desired. Yet at 82 he is still more fresh and audacious than most anything out there. Benedetta offers acts of torture and violence (mainly against women) to satiate the bloodlust, seedy clergymen who meet satisfying ends, horny and ludicrous sex acts, and so forth. Verhoeven’s body of work is an embodiment of our basest desires and, just like Schrader, he continues to look an embodiment of the cinema itself.

Benedetta premiered at the Cannes Film Festival and will be released by IFC Films.